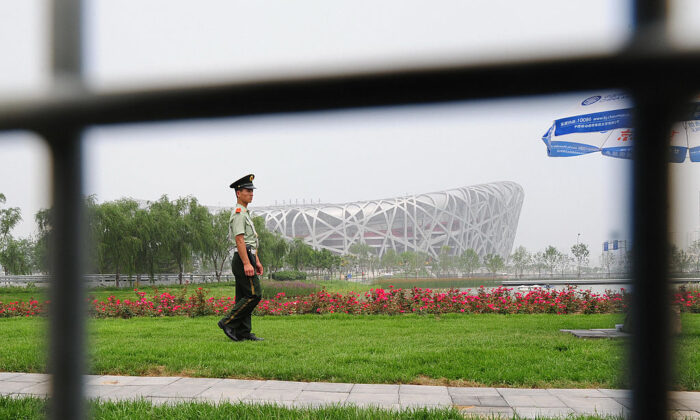 A paramilitary guard patrols the Olympic Green in front of the National Stadium, also known as the Birds Nest, which will host the opening and closing ceremonies as well as the athletics events during the 8-24 August Beijing Olympic Games on July 2, 2008 in Beijing. (Photo/ FREDERIC J. BROWN/AFP via Getty Images)

More than 10 years after Beijing hosted the Olympics Games, China has continued to trample on human rights and press freedom.

Now, with less than three years before China hosts the next games, the 2022 Winter Olympics, to be held in Beijing, U.S. Sen. Rick Scott (R-Fla.) is bringing attention to how China has failed to deliver its promises in hosting the games.

In an Oct. 17 letter to Thomas Bach, president of the International Olympic Committee (IOC), Scott wrote that Beijing shouldn’t be allowed to host the 2022 games if it continues to violate human rights and oppress the people of Hong Kong.

In Hong Kong, pro-democracy protests have continued for six months, as police continue to use heavy-handed tactics, and the city government and Beijing refuse to meet protesters’ demands, fueling public anger.

“As they continue to fight for democracy, the Communist government in China has turned Hong Kong into a police state as a way to force their citizens into compliance with Beijing’s rule of law,” Scott wrote in his letter, based on his observations during a recent trip to Hong Kong.

There are risks if the games are held in China, Scott said. Given China’s “totalitarian surveillance,” Beijing would have “full access to a global array of dignitaries, athletes, corporations, and governments” when they turn on their cellphones or connect to their hotels’ wireless networks.

“I ask this committee [IOC] to stand up for freedom and urge Communist China to do the right thing, or find a new home for the 2022 Olympic Games,” Scott said.

Bach responded to Scott’s letter on Nov. 18 by defending the committee’s decision in selecting Beijing to host the games. Bach said in a letter that the IOC was “strictly politically neutral,” as enshrined in the Olympic Charter.

“We can accomplish our mission only if we stay out of any political dispute,” Bach wrote.

“The response I received from the International Olympic Committee is shameful and embarrassing for an organization that prides itself on ‘uniting the world in peaceful competition.’ Are they naïve enough to think Communist China wants to unite the world?” Scott wrote.

“The Committee claims to be politically neutral, but the fight for human rights transcends politics. It’s sad they cannot see this.”

Scott also noted that Bach failed to provide any information on how to prevent China from stealing people’s personal information when they travel to Beijing for the games.

“This kind of cowardice is shameful and disappointing, and the world needs to speak out against every organization that refuses to defend freedom and human rights,” Scott said.

Tokyo will host the 2020 Summer Olympics.

Beijing hasn’t made any improvements in terms of human rights and press freedom since it held its first Olympics Games in 2008.

Washington-based Freedom House labeled China “not free” and gave the same scores in terms of political rights and civil liberties in both 2008 and 2018.

In fact, China had a lower aggregate score (11) in 2019 than it had a year ago (14). The 2019 ranking put China ahead of several countries, including North Korea, Somalia, Sudan, and Syria.

In 2019, Reporters Without Borders ranked China 177 in terms of press freedom, ahead of only three countries: Eritrea, North Korea, and Turkmenistan.

In March 2008, House Speaker Nancy Pelosi (D-Calif.) issued a statement saying, “I believe the International Olympic Committee made a mistake in awarding the 2008 Summer games to China.”

“Sadly, the Chinese government has not lived up to its commitments to improve the human rights situation in China and Tibet,” Pelosi wrote.

On Aug. 15, 2008, a week after the 2008 Summer games began in Beijing, the Congressional-Executive Commission on China (CECC) issued a statement criticizing Beijing for adopting measures to force out migrant workers in Beijing.

“These pre-Olympics actions by the Chinese government are inconsistent with international human rights standards such as equal treatment, freedom of residence, and right to work,” the CECC wrote.