The Department of Religion and Culture is a ministry office established under the executive organ of Central Tibetan Administration whose function is to overlook religious and cultural affairs in Tibetan exile community. It has the responsibility of supervising works aimed at reviving, preserving, and promotion of Tibetan religious and cultural heritage that is being led to the verge of extinction in Tibet.

It began its operation in exile community as Council for Religious Affairs office on April 27, 1959, headed by a Director and constituted by the representative of the four Buddhist schools as its principal members in Mussorrie. On 30th May 1960, the Council for Religious Affairs shifted its office to Dharamsala and on September 12, 1960, it became one of the seven main departments when His Holiness the Dalai Lama formally established the Central Tibetan Administration (CTA).

Under the affiliation of this department, there are 253 monasteries and 36 nunneries in India, Nepal and Bhutan and also five cultural institutions across India.

The Department of Religion and Culture is a ministry office established under the executive organ of Central Tibetan Administration whose function is to overlook religious and cultural affairs in Tibetan exile community. It has the responsibility of supervising works aimed at reviving, preserving, and promotion of Tibetan religious and cultural heritage that is being led to the verge of extinction in Tibet.

It began its operation in exile community as Council for Religious Affairs office on April 27, 1959, headed by a Director and constituted by the representative of the four Buddhist schools as its principal members in Mussorrie. On 30th May 1960, the Council for Religious Affairs shifted its office to Dharamsala and on September 12, 1960, it became one of the seven main departments when His Holiness the Dalai Lama formally established the Central Tibetan Administration (CTA).

Under the affiliation of this department, there are 253 monasteries and 36 nunneries in India, Nepal and Bhutan and also five cultural institutions across India.

The primary aim is to preserve and promote Tibetan religion and culture which has suffered and continue to suffer at the hands of Chinese regime in Tibet.Other objectives are:

1.     To plan and implement religious and cultural policies according to advice of His Holiness the 14th Dalai Lama and Central Tibetan Administration.

2.     To promote unity and harmony amongst Tibetan religious schools.

3.     To give help to the Tibetan monasteries, nunneries, temples, and cultural institutions for preserving and promoting cultural heritage of Tibet.

4.     To organize and participate in conferences and seminars on religion, culture, and Tibetan studies.

5.     To liaise with important religious associations of other faiths and with Tibetan and non-Tibetan Buddha Dharma Centers.

6.     To conduct and sponsor research in the areas of Tibetan and Buddhist studies.

7.     To oversee and assist to support the traditional monastic curricula in the reestablished Tibetan monasteries, nunneries, and cultural institutions.

8.     To hold public discourses and teachings for promotion and preservation of unique and rare oral religious transmissions.

9.     To look after the old, sick, and destitute monks and nuns and those who are in retreat.

10. To organize and perform regular and special religious events and activities.

This Central University was established on August 20, 1967 with funding from Ministry of Culture, Government of India and His Holiness the 14th Dalai Lama. It was a deemed university and caters wide range of services in the field of Tibetan studies.

Originally called Central Institute of Higher Tibetan Studies (CIHTS), it began functioning as a constituent wing of  the Sampurna Nanda Sanskrit University, and  eventually  emerged as an autonomous body in 1977 under  the  Department of Culture of  Ministry of  Education of the Government of  India. The Institute’s unique mode of functioning have been duly recognized, and on the recommendation of the University Grants Commission, the Government of India bestowed upon it the status of  a “Deemed  University”, Under Section 3 of the UGC Act 1956 on the 5th of April, 1988. Ven. Samdhong Rinpoche was the first Director. Following the recommendation of the Society, the nomenclature of the Institute was revised as Central University of Tibetan Studies (Deemed to be University  under  Section 3  of  the U.G.C. Act, 1956) with the approval of the Government of India, which was publicly released by His Holiness  the  Dalai  Lama on 15 January, 2009, and  notification  to this effect was made on 22.7.2009. For more details, check http://cuts.ac.in/.

It was established in 1971. The library houses rare and valuable collection of Tibetan books, manuscripts, thangkas (scroll paintings), icons, and other artifacts brought from Tibet. It also runs services like Tibetan language and Buddhist philosophical classes for foreigners and modern science workshops for the Tibetan geshes and khenpos. For more details, check www.ltwa.net

It was established in 1995. This institute has schools for thangka painting, embroidery, metal carving, and an academy for Tibetan culture. For more details, check www.norbulingka.org

This was established in 1988 in Darjeeling. It runs services like intensive training on Tibetan language and Buddhist philosophies. For more details, check www.manjushree-culture.org.

Department of Religion and Culture has four main sections:

Administrative Section: This section is the main body of the department whose function is to manage and maintain the overall function of the department. The account, scholarship, and sponsorship come under the supervision of Administrative division. Each sub-section has their own special functions and the concerned persons need to report to an Additional Secretary and the Secretary.

Archives Section: This section’s main responsibility is to maintain records of historically significant documents of Central Tibetan Administration after assortment by a workgroup called history section. This section facilitates all the departments of CTA to find old documents whenever they need and also provide a platform for researchers to assist documents to fulfill their research works on Tibet.

Culture Section: This section was established in July 2021 with the approval of Kashag. The main aim of establishing the culture section is strengthening its activities and programs for the preservation of Tibetan culture and language. 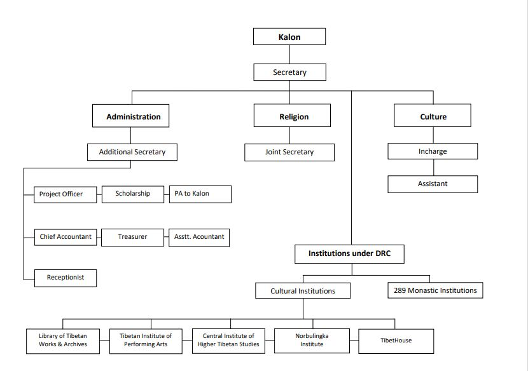 This is support program in which monks and nuns who escaped from Tibet and aged between 11 and 30 years. Such a monk or nun is provided with monthly stipend of Rs. 375 per month for 20 years or until they leave the monasteries and nunneries where they are enrolled. This program was started in 1980s and during the course of its operation the DRC was able to provide support to more than 10000 monks and nuns.

This is a support for destitute monks, nuns, and tantric who are not registered to any monasteries and nunneries and faced with difficulty in livelihood. The department provides stipend of Rs. 300 per month for them to support their lives. As of our past data, we have 48 beneficiaries and we are now in process of updating the list from Tibetan settlements.

The Himalayan region is deeply associated with Tibetans by language, culture and religion. Tibetan Buddhists and the Himalayan region Buddhists share a common culture of practicing and preserving Buddhism. There is growing number of Himalayans enrolling in various monastic institutions to learn and excel Buddhism. Since from FY 2020-21, the Department has been providing scholarship for 562 Himalayans studying in various Tibetan monasteries.

The DRC provides honorarium for Buddhist philosophy teachers, Science, Chinese Language teachers of smaller and financially weaker monasteries and nunneries. As of now we are providing honorarium of Rs. 3000 monthly to 490 Buddhist Philosophy teachers, Rs. 3,500 monthly to 16 Science teachers and Rs. 6,500 to nine Chinese Language teachers of various monasteries and nunneries.

Under this project, the department provides a special fund to the scholar monks and nuns who want to studies and write a thesis on one specific topic. The duration of the specialization course program is four years. During the course, department organize workshop on writing thesis and also pay scholarship. So far the department has provided scholarship to 20 researchers from various schools of Tibetan Buddhism and Bon Tradition.

There are many temples and small monasteries in every Tibetan settlement across India, Nepal and Bhutan for performing ritual services to the Tibetans. Since there is no proper financial source for them other than small amount of venerations offered by Tibetan settlers, the DRC provides monthly stipend to the caretakers of temples and small monasteries.

The erection of Buddhist Stupas project was one of the major activities of the department and it was begun in 2014 under the guidance of His Holiness the Dalai Lama. The project has received financial support from Gaden Phodrang, (Private office of His Holiness the Dalai Lama) Department of Religion & Culture, CTA and General Tibetan Public Donations. The main purpose of erecting eight stupas in eight holy places of Budha is to pay a symbol of gratitude to the Government and People of India for their unflinching support to the people of Tibet and also dedicated for prevalence of global harmony and restoration of natural environment.

The Religious Seminar of four major schools of Tibetan Buddhism and Bon Tradition is the follow up works of resolution passed in the meeting of preservation of Tibetan Buddhism held in 2013. The main aim of the seminar is to share the knowledge and experiences and understand the common goal of Buddhism and Bon as a one among them. The third Religious Seminar will be going to hold soon with speakers and participants from various monasteries and nunneries.

The DRC yearly organizes Chotrul Monlam Chenmo and Guru Bumtsok, conducts “long life prayers” to His Holiness the 14th Dalai Lama and leaders of four major Tibetan Buddhist schools and Bon religion on timely basis, and coordinates other religious services required to be done by Tibetan community for the security of His Holiness the 14th Dalai Lama and for welfare of Tibetan nation. Apart from that, Department also organized special prayer services for Tibetans in Tibet who self-immolated themselves on fire to protest against Chinese government for freedom in Tibet and returns of His Holiness the Dalai Lama to Tibet.

As giving importance of Tibetan youths, coming out from college, to understand the basic knowledge on Tibetan Buddhist philosophy, the DRC initiated the workshop called “Intensive Course on Tibetan Language and Buddhist Philosophy” for the period of six months in collaboration with Snow land School of Tibetan Studies at Gyumed Monastery, Hunsur. As of now the department has successfully organized eight workshop and many Tibetan youths received benefit from it.

Through this project, we facilitate financial support to the individuals and organizations whose works are relating with preservation and promotion of contemporary Tibetan arts and distinct culture of Tibet. The core purpose of this project is to encourage Tibetan artists to continue carry out their works for keeping alive and strengthening Tibetan culture. The Department offering grant fund of Rs. 1, 00,000 to 3, 00,000 based on the applicant’s project proposals and interview.

There are growing numbers of Tibetan students enrolling in Indian private schools. As a student spends more time in schools than with their parents and Tibetan society, their identity gradually fades away with the dominant culture. The first ever summer immersion program for Indian school-going Tibetan students was held in the year 2022 at Sarah, Dharamsala.  The major curriculum of the program includes innovative cultural introductory classes, music and dance classes, and cultural inclusive programs

All the Announcements of the Department of Religion & Culture, Central Tibetan Administration are uploaded in the Departmental website.  Visit www.chorig.org