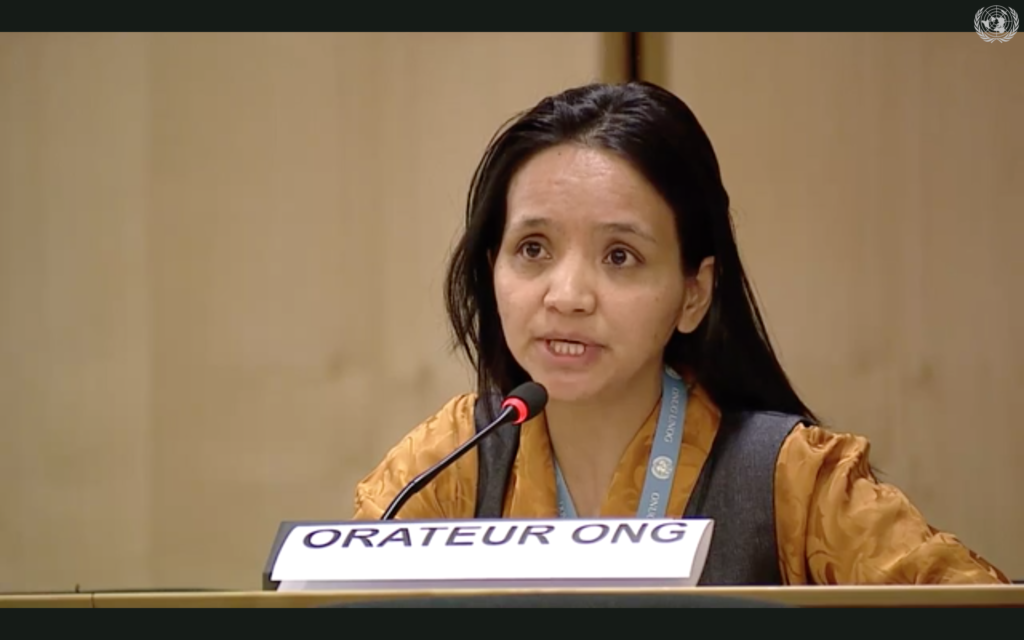 Kalden Tsomo, staff of the Tibet Bureau in Geneva, urges the UN High Commissioner for Human Rights to visit Tibet at the ongoing 43rd regular session of the UN Human Rights Council.

While echoing the voices of Tibetan people whose “rights have been severely curtailed by China”, Ms Kalden drew council’s attention that the “expected visit of High Commissioner is incomplete without a visit to Tibetan areas”. She further added “what China is doing against Uyghur Community is the replication of what China has been doing, and continues to do in Tibetan areas even today”, and urged the High Commissioner to press China for “an unfettered access to Tibet”.

Furthermore, marking the 61st anniversary of Tibetan National Uprising Day of the 10th March 1959, Ms Kalden highlighted the deteriorating situation inside Tibet. “In the past six decades, the space for Tibetans to live without fear from being arbitrary arrests, torture and disappearance is too far from ground reality. In fact, the situation is deteriorating, and has become bad to worse” she added.

Expressing concern and sadness over the global outbreak of COVID-19, she raised concern over China’s crackdown on freedom of speech and absence of transparency due to which an “actual number of affected coronavirus affected cases in Tibet remain unknown”. She concluded her statement by calling for the Council’s attention and urged China to enter into dialogue with envoys of His Holiness the Dalia Lama.

The entire session can be viewed here.

The four- week 43rd regular session of the Human Rights Council commenced on 24th February, and will continue until the 20th March. Due to the global outbreak of COVID-19 and Swiss government’s decision to ban all public gatherings of more than 1000 people, the Bureau of the Human Rights Council has cancelled hundreds of human rights side events scheduled to take place from 3rd March to 20th March, including an event on the human rights situation in Tibet. Side events are mostly organized by UN ECOSOC affiliated non-governmental organizations.