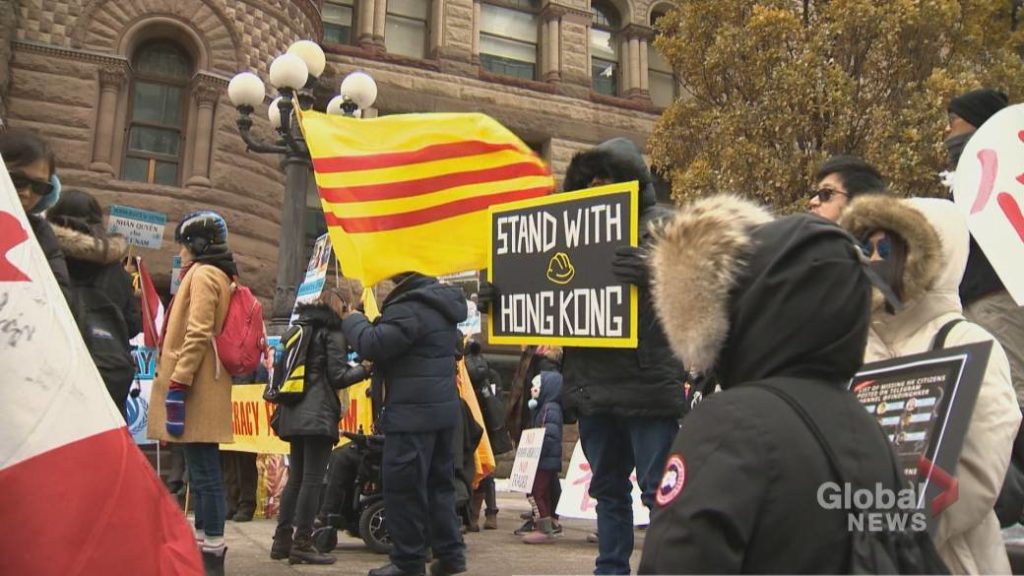 Ahead of International Human Rights Day, hundreds gathered on the steps of Old City Hall to urge the federal government to address what is considered the systematic suppression of human rights in China and beyond.

“We Canadians do care about human rights not only in Canada but also around the world and our Canadian government needs to come up with a much stronger position towards China and Hong Kong,” explained organizer Gloria Fung, who is also a spokesperson with Canada Hong Kong Link.

The rally started with speeches and honed in on standing in solidarity with other human rights defenders not just in Canada but around the world. There were people from Hong Kong, Korea, Tibet and Turkestan.

“If the flame of freedom dies in Hong Kong, Tibet and (the) east Turkestan region, the whole world becomes much darker,” Fung said.

“This struggle is not just about freedom for Hong Kong, Tibet and east Turkestan, it is also about people around the world fighting to defend core values that we all cherish, human rights, freedom, rule of law and democracy.”

For months, there has been political unrest in China. A pro-democracy movement has caused thousands to be jailed, city centres have been closed and police brutality continues to balloon.

“I’m so happy that today a lot of people are gathered around here. Not only Chinese people but also a lot of Canadians,” demonstrator Jason Wang said.

The protest was peaceful and was aimed at showing those abroad that they’re being thought of in the West.

A similar demonstration was held in Vancouver.

“When (the) global society cares about one issue and one specific country, I think it automatically gives pressure to the government and the police state. They’re going to be ashamed for what they’re doing if a lot of people criticize it globally,” added Hyunjin Cho, a participant from Korea.

Demonstrators would like Canada to take a stronger stance on the ever-growing human rights violations in Hong Kong. According to advocates with the Canada Hong Kong Link, they’d like to see the federal government impose sanctions on key officials from China as well as freeze assets.

“This is the most effective way of preventing them from continuing with their violations of human rights,” added Fung.

Hundreds gather on the front steps on Old City Hall this hour, asking for Canada to take a stronger stance on human rights violations in Hong Kong. These men, women and children are sending a strong message that those in the west care and are standing in solidarity. @globalnewsto pic.twitter.com/F7MPG3pG7a