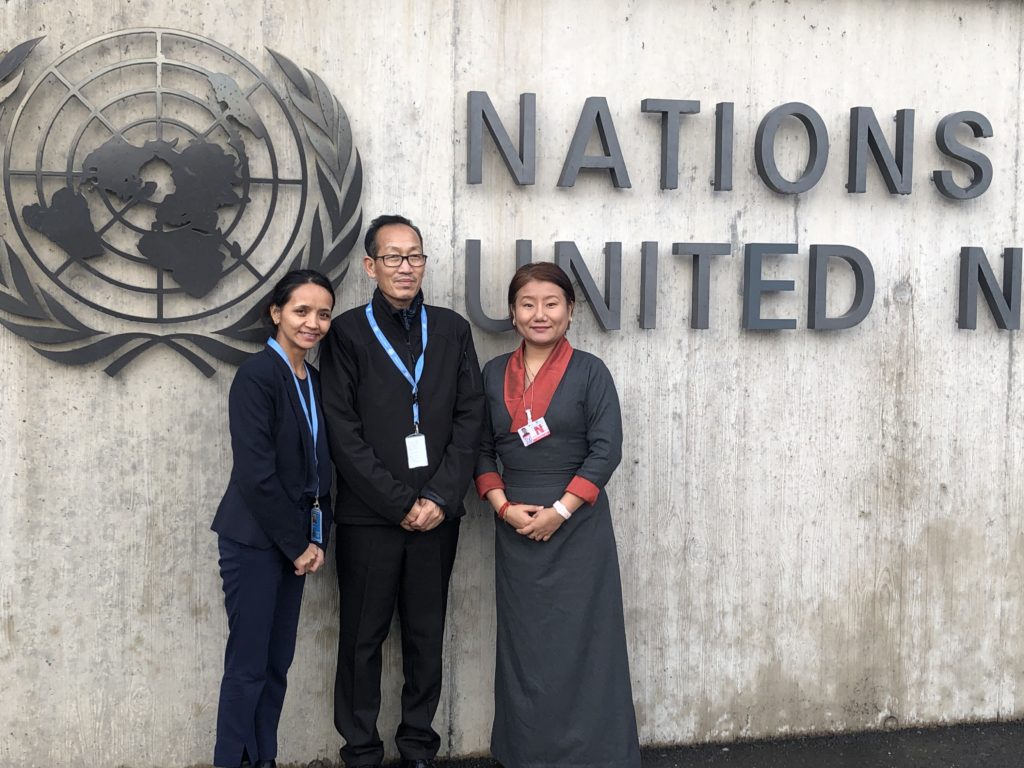 Geneva: The Twelfth Session of the UN Forum on Minority Issues is being convened on 28 and 29 November 2019 at UN Building also known as Palace of Nations (Palais des Nations) in Geneva. This year, the theme of the Forum is “Education, Language and the Human Rights of Minorities.”

The Representative of His Holiness Dalai Lama Mr Chhime Rigzen, the UN Advocacy Officer Ms Kalden Tsomo and Special Appointee for Human Rights Ms Thinlay Chukki all working at the Office of Tibet, Geneva attended the Forum. They met with the Special Rapporteur with briefings about the deplorable state of Tibetan language in Tibet.

Delivering the oral statement at the Forum Ms Thinlay Chukki highlighted the imposition of policy of monolingualism by China on Tibetans. She stated that Tibetans have been ‘minoritized’ by China in their own land and Mandarin language is being imposed on Tibetans.

She further highlighted the retributive policies of Chinese leading to incarceration of language rights advocate like Tashi Wangchuk, the recent arrest of Tibetan monk Sonam Palden from Kirti Monastery and the destruction of Larung Gar and Yachen Gar Buddhist academies which have rendered thousands of monks, nuns and laypersons homeless with no access to study Buddhism in Tibetan language.

The copy of the entire oral statement is available below:

Twelfth Session of the UN Forum on Minority Issues on

“Education, Language and the Human Rights of Minorities”

Statement delivered by Ms Thinlay Chukki on the theme of “Public policy objectives for education in and the teaching of, minority rights.”

One of the greatest challenges faced by minority groups in preserving their culture is the imposition of monolingualism.

Tibetans “minoritized” by China are facing the imposition of mandarin.

Finally, there is retribution against language rights advocates like the incarceration of language rights advocate Tashi Wangchuk and the recent arrest of a Tibetan monk named Sonam Palden from Kirti monastery for highlighting the deplorable state of Tibetan language on social media. The large-scale demolitions of Buddhist academies like Larung Gar and Yachen Gar have rendered thousands of monks, nuns and laypersons homeless with no access to learn Buddhism in Tibetan language.