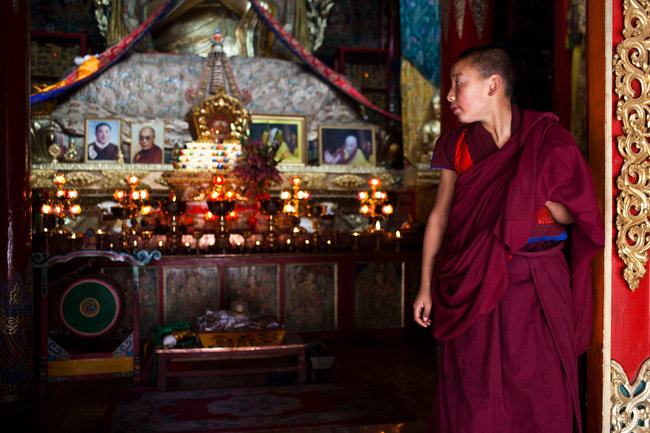 Images of the Dalai Lama, banned by China, at a Tibetan monastery in Qinghai/Photo by Shiho Fukada for The New York Times

MACHU: Like many children of Tibetan nomads, Tsering Kyi started school relatively late, at age 10, but by all accounts she made up for lost time by studying with zeal.

“Even when she was out at pasture with her parents’ flock, there was always a book in her hand,” a cousin said.

That passion for learning apparently turned to despair this month when the Maqu County Tibetan Middle School, in Gansu Province near Tibet, switched to Chinese from Tibetan as the language of instruction. The policy shift has incited protests across the high-altitude steppe that is home to five million Tibetans and a far greater number of ethnic Han Chinese.

On March 3, a few days before the start of the spring semester, Tsering Kyi, 20, emerged from a public toilet at the town’s produce market, her wispy frame bound in gasoline-soaked blankets that had been encircled with wire, relatives and local residents said.

In a flash she was a heap of flames, her fist raised defiantly, before falling to the ground, residents said. She died at the scene.

Over the past year 29 Tibetans, seven of them in the last three weeks, have chosen a similarly agonizing, self-annihilating protest against Chinese policies. Of those, 22 have died.

Beijing, alarmed about the threat to stability in a region seething with discontent over religious and cultural controls, has responded with an assortment of heavy-handed measures. Officials have described the self-immolators as outcasts and terrorists, blamed the pernicious influence of Tibetan exiles and flooded the region with checkpoints and paramilitary police officers in flak jackets.

Communist Party leaders have also introduced a “monastic management” plan to more directly control religious life. As part of the plan, 21,000 party officials have been sent to Tibetan communities with the goal of “befriending” monks — and creating dossiers on each of them. Compliant clergy members are rewarded with health care benefits, pensions and television sets; the recalcitrant are sometimes expelled from their monasteries.

At some temples, monks and nuns have been forced to publicly denounce the Dalai Lama, the exiled spiritual leader whose name is often invoked by self-immolators. The freedom of movement that allowed monks to study at distant monasteries across Tibet and four adjacent provinces has been curtailed.

“They claim we are free to practice our religion but in fact they keep pulling the reins tighter and tighter so we can hardly breathe,” said a 22-year-old monk from Qinghai Province, who like many Tibetans keeps banned pictures of the Dalai Lama in his room and on his cellphone.

Senior officials have trumpeted the new approach, which includes the distribution of one million national flags and portraits of Mao Zedong and other party leaders — with a requirement that they be displayed at homes and monasteries. “Temples have undergone a delightful change since the new management methods were put into place,” Xinza Danzengquzha, a top Tibetan official, said this month in Beijing.

Such measures, however, may be having the opposite intended effect. Robert Barnett, director of the Modern Tibet Studies Program at Columbia University, said that the government’s more intrusive approach to monasteries, the heart of Tibetan society, is a reversal of self-management policies put in place in the 1980s. “History suggests it is unlikely to work,” he said.

The antipathy, never far beneath the surface, is erupting into plain view with greater frequency. In the past week, several protests have broken out, including two in Qinghai Province that were led by students angry over the introduction of Chinese-language textbooks for subjects like chemistry, math and geography. In January, exile groups say 31 people were shot, at least one fatally, when police officers opened fire on demonstrators in Drango County, in Sichuan Province. In Diru County, in the Tibet Autonomous Region, 20 of the 22 monasteries have been closed, according to the Tibetan Center for Human Rights and Democracy.

Spasms of unrest have coursed through modern Tibetan history with some regularity since 1959, when the Dalai Lama fled to India after a failed uprising. Between 1987 and 1989, the region was rocked by protests that were brutally crushed. The most recent crackdown began in March 2008, when rioting in Lhasa, the Tibetan capital, led to the death of at least 19 people, most of them Han Chinese. In the weeks and months that followed, exile groups say a far greater number of Tibetans died.

But Tibetan scholars and exiles say the current resistance campaign is unlike anything seen before. The tactic — public, fiery suicides that do not harm bystanders or property — has profoundly moved ordinary Tibetans and bedeviled Chinese officials. Just as significant, they note, is that the protesters are mostly young — all but nine of them under 30.

Tsering Kyi was one of them. According to family members, she was a thoughtful student whose hard work earned her a place on the school’s honor roll. But in 2010, she joined classmates who took to the streets of this dusty county seat to protest the new Chinese-language textbooks and the decision to limit Tibetan to a single class. In the clampdown that followed, several teachers suspected of encouraging the protest were fired and the headmaster, a popular Tibetan writer, was sent to work on a dam project, according to local residents.

Tsering Kyi’s death has been widely publicized by Tibetan activist groups eager to draw attention to the self-immolations. The Chinese state news media, which has ignored most of the cases, reported that she was mentally unstable after hitting her head on a radiator. Her grades started to sag, the official Xinhua news agency said, “which put a lot of pressure on her and made her lose courage for life and study.”

In interviews, several Tibetan residents and relatives of Tsering Kyi’s contemptuously waved away such assertions. Instead, they were eager to discuss her devotion to her Tibetan heritage and the final moments of her life. When she emerged from the public toilets in flames, they said, the market’s Han Chinese vegetable sellers locked the front gate to prevent her from taking her protest to the street. No one, they claim, tried to douse the fire.

When the police arrived, they forced witnesses to remain inside the market and returned Tsering Kyi’s body to the bathroom. Then, after collecting everyone’s cellphones, they methodically went through the devices and deleted any photographs of the incident.

In interviews last week with two dozen monks and ordinary Tibetans in Qinghai and Gansu Provinces, many said that they expected the fiery suicides and protests to continue to spread beyond Aba, the county in Sichuan Province where the majority of the self-immolations have taken place. “From the outside, everything looks so pretty here, but on the inside, everyone is boiling,” said one lama at a monastery in Rebkong, a major tourist draw in Qinghai famous for its intricate thangka paintings.

The lama, who asked for anonymity because speaking to foreign reporters can lead to severe punishment, said monks were expected to attend “patriotic education” sessions that consist of pro-government propaganda. “I don’t want trouble with the authorities, but I can’t control their rage any longer,” he said of the monks.

In Gansu Province, security at the sprawling Labrang Monastery was visibly tighter, and emotions more raw. Monks there said the accumulation of indignities, years in the making, was followed by two days of street protests in 2008 that led to a wave of detentions and beatings.

Many Tibetan monks are unable to get passports and the Han, they said, often treat them with contempt. “We can’t even speak our minds on the phone because the police are listening in,” said one 39-year-old who ducked into a reporter’s hotel room to share details about life for Labrang’s 1,400 monks.

He described how the police had raided the white-walled monastery complex one night as everyone slept, kicking in doors, smashing computers and tearing up photographs of the Dalai Lama. At least 180 monks were detained that night. “They ran out of handcuffs, so they started tying our wrists with rope they found in the monastery,” he said.

The monks were eventually released but Labrang, one of the most important religious sites in Tibetan Buddhism, is a changed place. Video surveillance cameras hang from the eaves of hallowed temples and plainclothes police officers mingle with the faithful. “They never fool us because they hold their prayer beads with their right hand, and every Tibetan knows to hold them in their left hand,” one monk said.

A version of this article appeared in print on March 23, 2012, on page A1 of the New York edition with the headline: Tibetan Self-Immolations as China Tightens Grip.