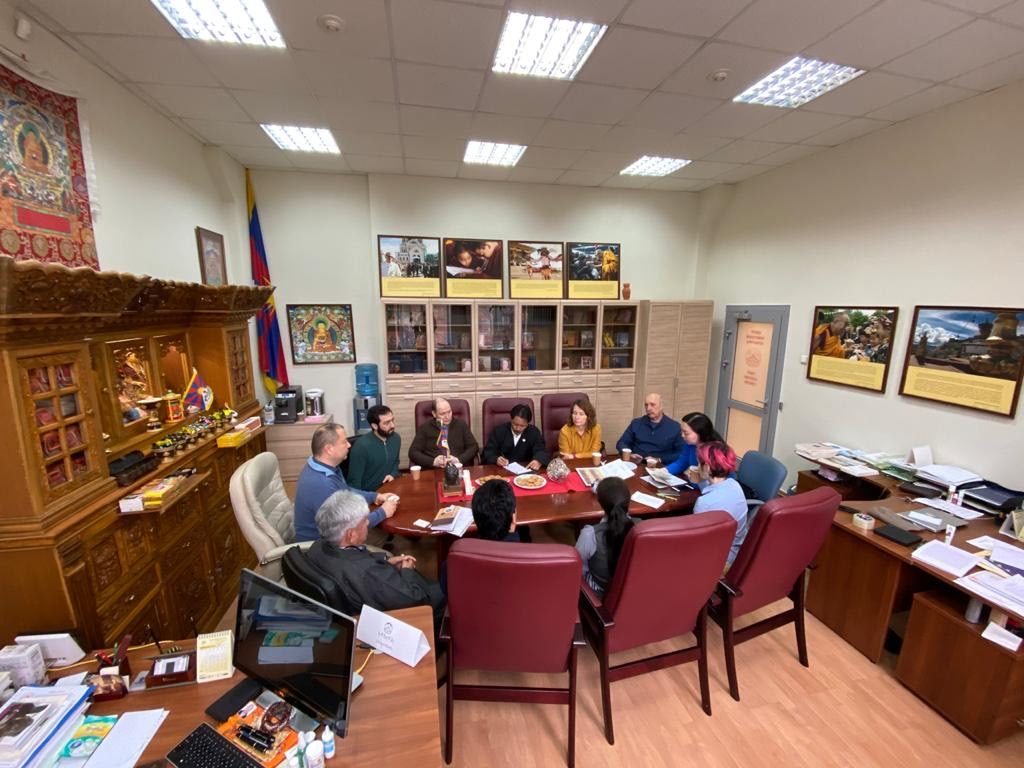 Interaction with Moscow based Tibet groups and Dharma Centers.

Moscow: Members of the Tibetan Parliament in Exile paid an official visit to the Russian Federation from 2 to 11 March with the purpose to meet with old friends, parliamentarians, media, Tibet supporters and think tanks as well as to reinvigorate support for Tibet. The delegation consisted of MPs Dawa Tsering, Tsering Youdon, Dhondup Tashi and Tsanetsang Dondup Tashi.

Upon arrival at the Moscow Airport, they were greeted by Karma Tenzin, Secretary of Moscow based Office of Tibet, Mr Dawa Tsering, president of Moscow Tibetan Association and local Tibetans living in Moscow.  In the evening of the 2nd, the Moscow Tibetan association hosted a dinner to welcome the Parliamentarians and brief them of the Tibetans living n Moscow. Honorary representative Telo Tulku Rinpoche introduced the Parliamentarians and introduced each of the members’ background to the delegation members. MP Dawa Tsering was introduced to give a speech to local Tibetan Community and he informed them the purpose of the Parliamentarians visit and advised all Tibetans to live in unity and never forget the rich heritage of the Tibetan Plateau. The speech was followed by a Q&A session by the Tibetans and shared their concerns of the TPIE and CTA.

On 3 March, the Parliamentarians paid a visit to Office of Tibet which is registered as ‘Tibet Culture and Information Center’. They met with representatives of the Tibet Support groups and Dharmas centers. The delegates thanked each representative with a Tibetan scarf and appreciated them for continuous support.

Save Tibet Foundation hosted a lunch in their honour which was followed by a working meeting at Office of Tibet where Representative Telo Tulku Rinpoche briefed the Parliamentarians on the Political challenges in Russia as well as the other countries under the jurisdiction of the Moscow based Office of Tibet.  In the evening a dinner was hosted by a group of Russian State DUMA (Russian Lower house parliament) Deputies to welcome the TPIE delegation to Russia and exchange views on Tibet and learn more about each other’s system of parliament. 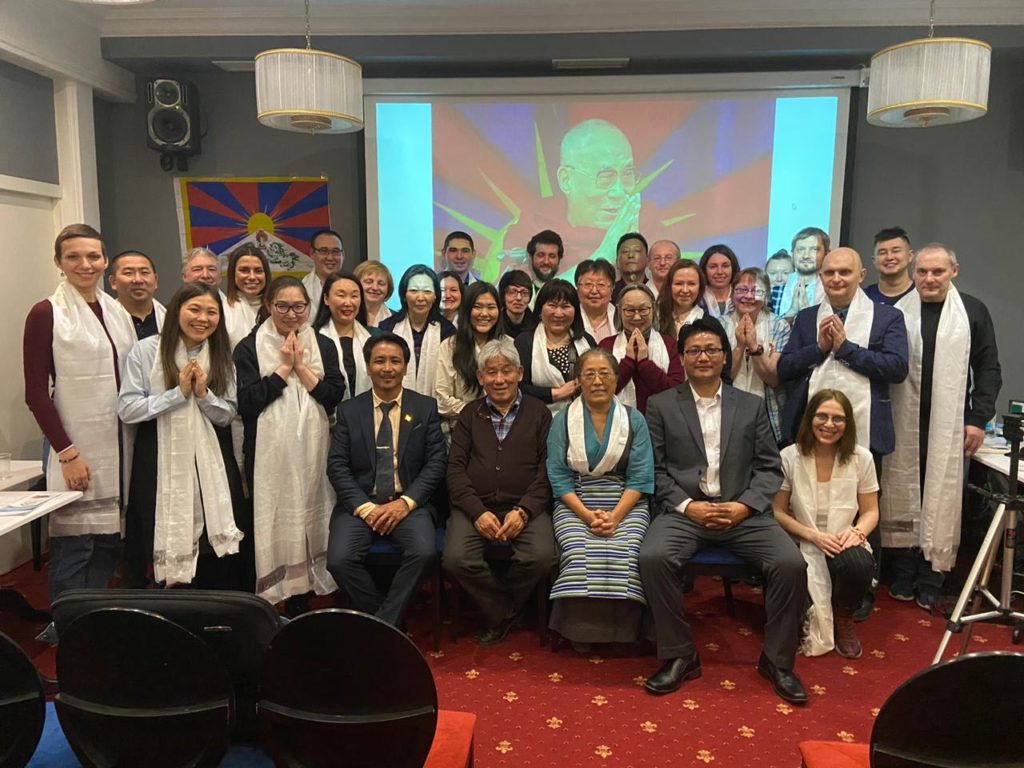 From 4 to 7 March, the Delegation visited St Petersburg where they held meeting with the local Tibet supporters and they briefed the public about the current situation. It was followed by a Q&A Session. The following day the paid a visit to the historic Buddhist temple built by contributions of the 13th Dalai Lama and local Buddhist community of the Russian Empire where they held a productive meeting with the Abbot.

In the afternoon the held a media briefing which was held at “RosBalt” news agency. The briefing was attended by 7 different media outlets. On the last day, they paid a visit to “Institute of Oriental Studies” to view the large Tibetan Buddhist canon collection and discussed future collaborations strengthening the academic ties. The meeting was followed by intensive interaction with students at the University of St Petersburg particularly with the Department of Asian Studies head of Faculty. 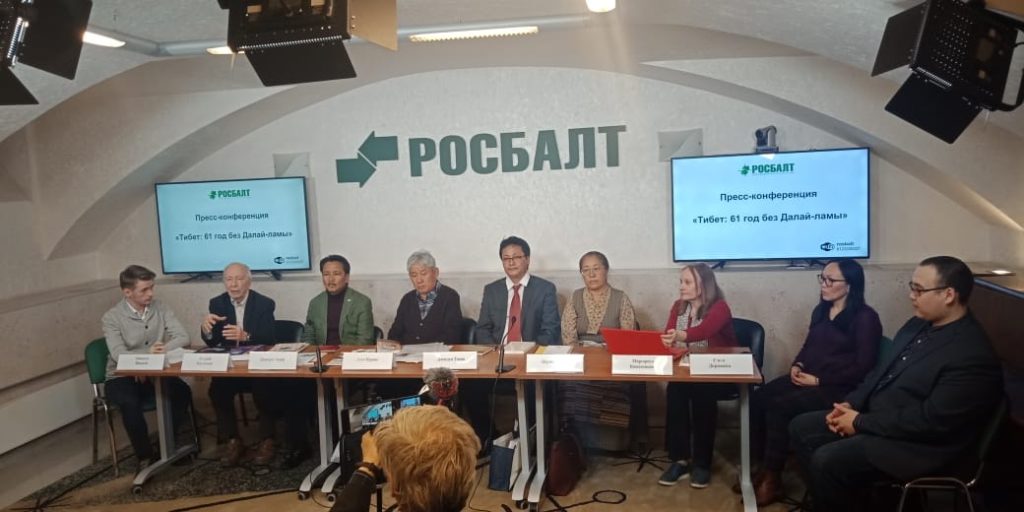 Meeting with the press at “RosBalt” News agency in St Petersburg.

From 7 to 10 March, the TPIE delegation visited one of the Buddhist Regions in the Russian Federation, Kalmyk Republic. The host was “Kalmyk Friends of Tibet”. In the afternoon of the arrival, they met with the Rector of Kalmyk state university where he briefed the delegation of the history of the Kalmyk people’s deportation and shared stories of Tibet and Kalmyk People historical relations. The following day delegation had excursion of the Central Buddhist monastery and had a dialogue with the abbot and monks of the administration.  In the afternoon the National Museum welcomed them and gave an excursion of the exhibition of Kalmyk culture and traditions. Also, they met with former Deputies of the Kalmyk republic and NGO members to brief them of the situation in Tibet. The next day they paid a visit to “Lonely tree” which a sacred place of worship for the Kalmyk people and made Incense Offering to the Buddha’s and deities. The prayer ceremony was followed by meeting with local government officials and local businessmen, the official day ended with paying respect and offering Khatak at the memorial of the Kalmyk People deportation called “Exodus & Return”. 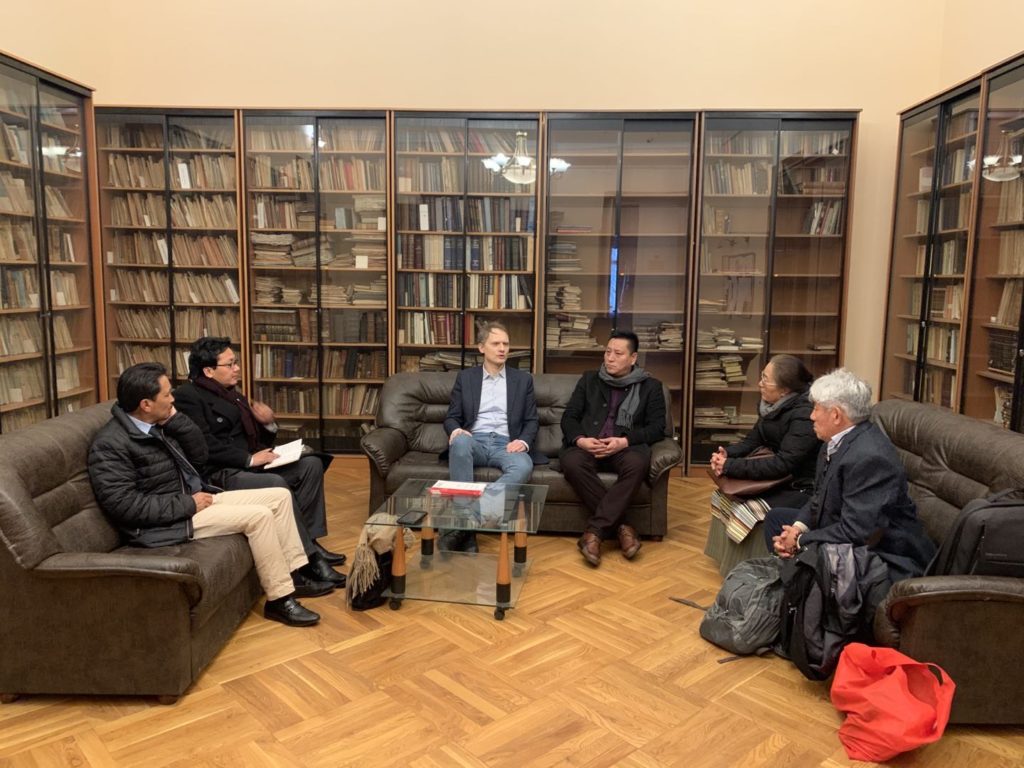 Dialogue at the Institute of Oriental studies in St Petersburg.

On 10 March, the 61st anniversary of the Tibetan National Uprising Day, the TPIE delegates held a press conference and briefed the media of March 10th occasion and gave detailed information about the current situation.  In the afternoon near the Kalmyk Government building where a Buddha statue was built to commemorate H.H. the Dalai Lama’s 70th birthday, a prayer service was held to commemorate the 61st anniversary of National Tibetan Uprising which was well attended by Buddhist monks and supporters.  The successful program of the Tibetan Parliamentarians delegations’ visits ended with a dinner hosted by the Tibetans living in the Kalmyk Republic. Memento was given to President of “Kalmyks Friends of Tibet” as a gratitude for their unwavering support and standing for justice and peace. 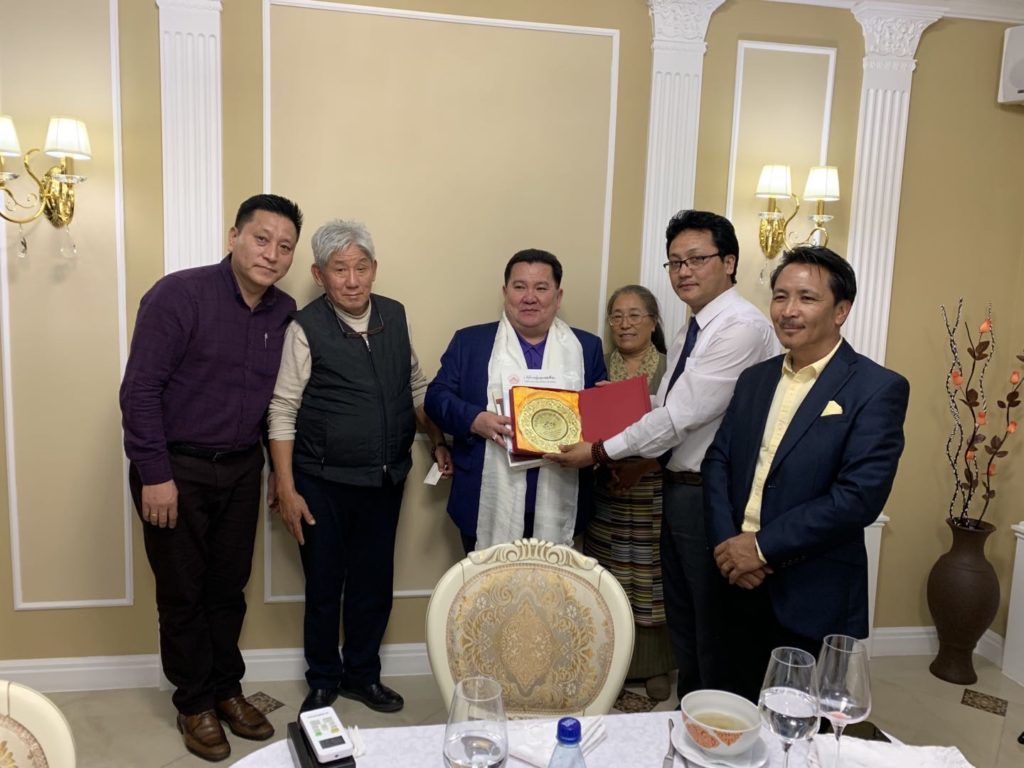 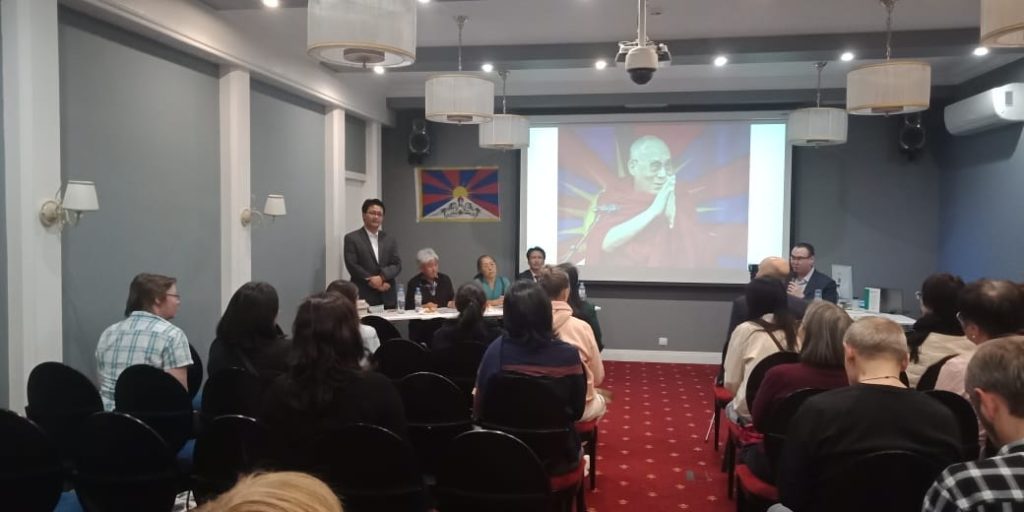 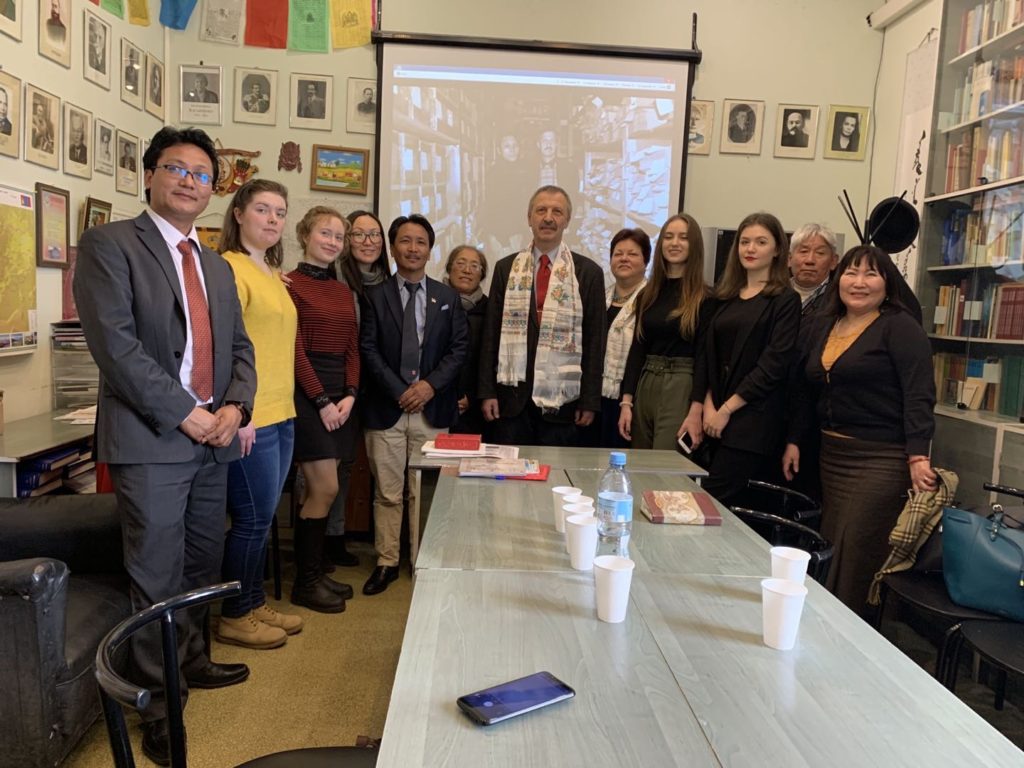 Delegation with students of Tibetan Language and faculty members of the St Petersburg University. 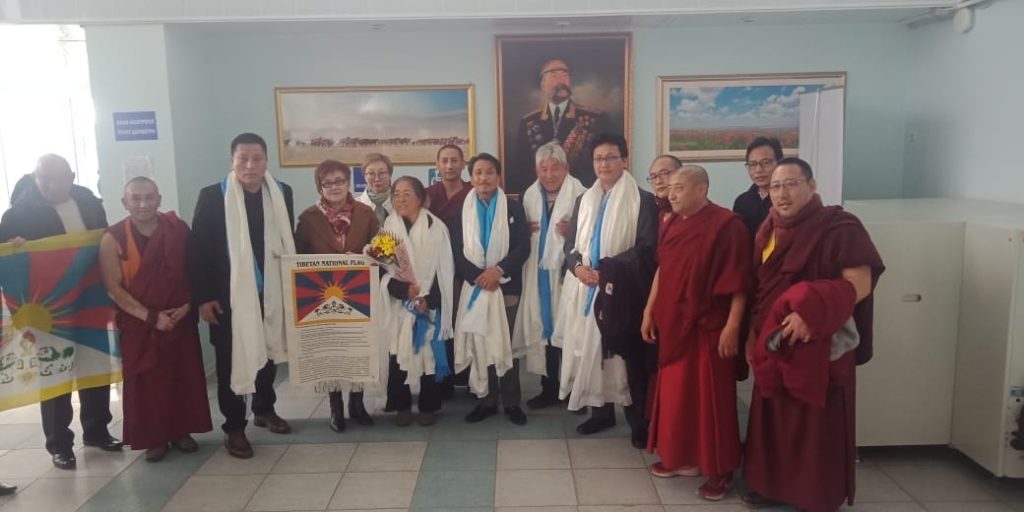 Reception for the TPIE delegates on arrival at the Republic of Kalmykia. 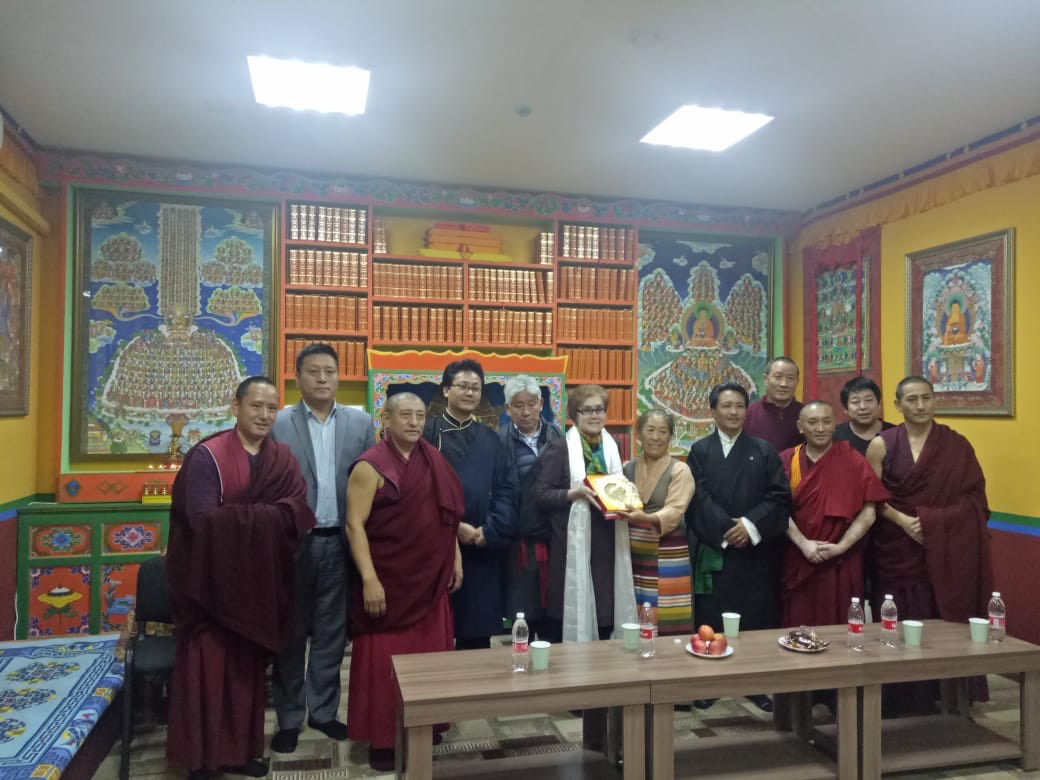