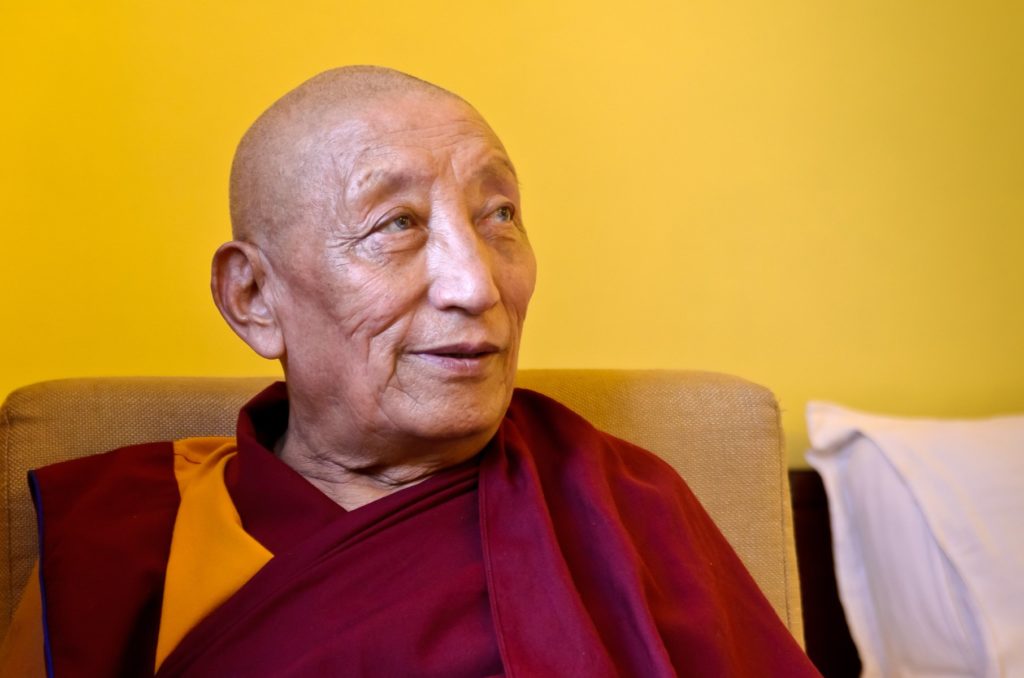 A picture of Geshe Jampa Gyatso in life. Photo/OOT, Taiwan

Taiwan: Geshe Jampa Gyatso, a Tibetan Buddhist scholar and former political prisoner has entered rare spiritual meditative state of thukdam after being declared clinically dead on 14 July, according to Office of Tibet, Taiwan. Geshe Gyatso was a spiritual guide at OOT, Taiwan.

Thukdam (Tib: ཐུགས་དམ་) is a Buddhist phenomenon in which realised master’s consciousness remains in the body despite its physical death. Though they are declared clinically dead, their bodies show no signs of decay and are found to remain fresh for days or weeks without preservation. Scientific inquiry into this phenomena has begun a few years ago under the initiative of His Holiness the Dalai Lama. (Read more)

After his clinical death on July 14, the mortal remains of Geshe Gyatso was returned to his funeral home. His close friend, Geshe Norbu of Sera Jey Monastery who had arrived for the prayer services held on the first and second day observed that his body emitted no signs of death in hue or odour, and assessed that the deceased had entered the state of thukdam.

On the third day, President Abbot Jigme Namgyal of the International Tibetan Buddhist Centre had seconded the observation.

At the time, Taiwan was in the midst of peak summer, yet nothing could be detected from an observation of the mortal remains.

The staff of the Office of Tibet revisited the body on the 5th day to determine signs of decay and decomposition. Similarly, it was examined by medical professionals who expressed their complete astonishment at the phenomenon, and the account of which was subsequently apprised to the Office of His Holiness the Dalai Lama.

Secretary Tsegyam who relayed His Holiness’ instruction on the matter advised that a detailed report of the observation of the medical professional and a scientist’s if possible be conducted for research purposes.

Accordingly, Geshe’s students approached Taiwan’s research centre, Academia Sinica which in turn requested a scientific examination of the meditating monk. In this regard, the Gaden Phodrang Office via Secretary Tsegyam advised that conducting the examinations would be of benefit to the ongoing research on thukdam and Buddha dharma in general.

On 24 July, the physicist and his assistants from Taiwan’s research centre, Academia Sinica arrived and conducted the first scientific examination on the monk.

Physicist Prof Ting-kuo Lee had previously participated in a 2018 dialogue conducted between His Holiness and Chinese scientists on effects of Quantum Physics held in Dharamsala. Professor Lee expressed his bewilderment and noted its similarity to the description provided by His Holiness during the dialogue.

On examination, it revealed the level of oxygen of the body to be at 86, quite close to a living human. Additionally, the suppleness of the skin, the apparently undecomposed state of the internal organs, the facial glow and warmth was noted under close examination. It was supplemented by an examination of the neural activity of the brain of the deceased on 28 July and 1 August by Taiwan University’s Psychology Professor and his assistants who noted significant activity.

Similarly, Office of His Holiness the Dalai Lama directed Dr Tseten Dorje of Delek hospital to guide the physicist, which was coordinated with the photographic documentation of the gradual changes in the body which were shared with Dr Tsetan Dorje and his guidance was followed through by the assistant.

According to astrological reading, the body will be cremated on 21 August.

The observations of the scientists, professors, medical professionals along with the photo and video documentation, accounts of caretaker and students on the Geshe’s 28 days of thukdam will also be submitted to the Office of His Holiness the Dalai Lama.

Read the report in Tibetan here.

The scientists from Academia Sinica examine closely for signs of decay and decomposition. Photo/OOT, Taiwan

The vital statistics are examined for noticeable differences. Photo/OOT, Taiwan