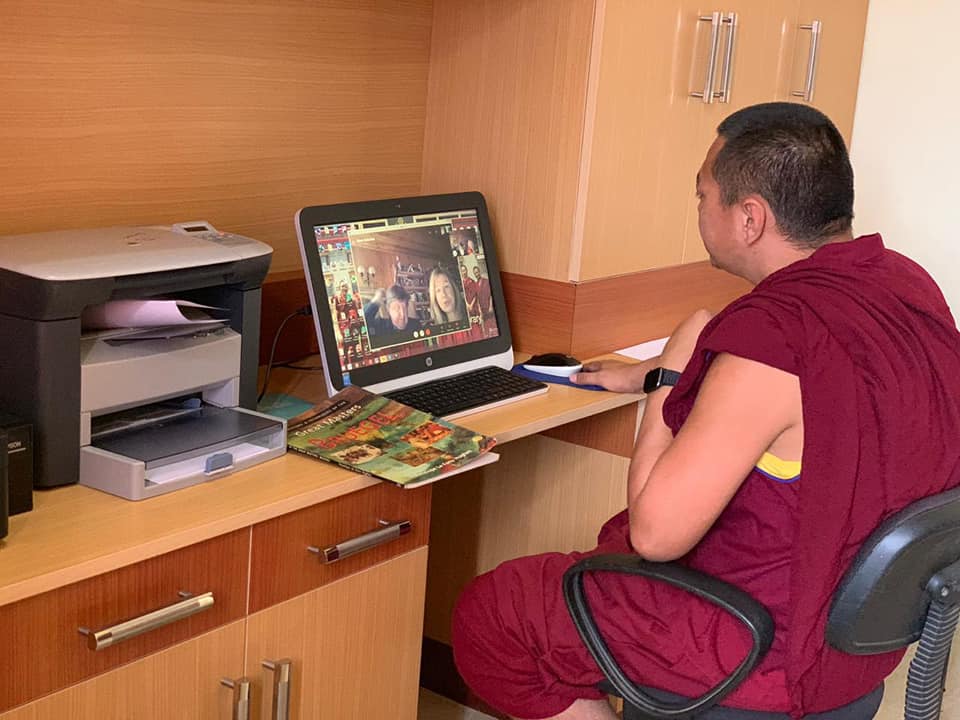 Moscow: Monk researchers are invited to enrol for training and further work on the joint project of Russian scientists and Buddhist monasteries aimed at studying the altered states of consciousness and the thukdam phenomenon. The interviews with candidates have already been started.

The initiative is based on His Holiness the Dalai Lama’s idea that the Western scientific methods of studying meditation should be applied by the followers of Buddhism themselves in collaboration with Western researchers. From this perspective, the Russian science, particularly its physiological and neurophysiological schools, holds a special place in the world as it combines technological and holistic approaches and explores the subject on the basis of a hypothesis (of a whole), which in many ways brings it closer to Buddhist science and the approaches it implements.

Following the theoretical course “Middle Way Approach in Neuroscience”, which includes the basic principles of brain structure and functioning, psychophysiology and Western scientific methods of brain study, selected monk researchers will receive practical training to operate scientific equipment so that they can begin research at the laboratories of their monastic universities next year.

The joint Russian-Buddhist research centre consists of two conglomerates of seven Buddhist monastic universities in Karnataka state, South India. They are called Unit A and Unit B within the structure of this unique project. The abbots of Sera Jey, Sera Mey, Tashi Lhunpo (Unit A) and Drepung Gomang, Drepung Loseling, Gaden Jangtse, Gaden Shartse (Unit B) monasteries signed an agreement to cooperate with the Russian side, and namely with Academician N.P. Bekhtereva Foundation for support of brain research, Save Tibet Foundation (Moscow) and Tibetan culture and information centre (Office of Tibet Moscow).

“We already had an opportunity to host the first batch on monks to undergo training in Russia. – said Honorary Representative of His Holiness the  Dalai Lama in Russia, Mongolia and CIS countries Telo Tulku Rinpoche. –  The collaboration of Buddhist monks and Russian scientists so far has been a great success. Since we signed an agreement with all major monastic institutions, the joint work has brought many positive results and to do further research we need to increase the number of monks researchers.  Therefore, we are in the process of selecting the second batch of monks to come to Russia for training”.

In September 2019 eight monks from these monasteries have already completed training in Russia under the “Middle Way Approach in Neuroscience” program. Another group of monk researchers have been completing their studies on the spot and will join the project in autumn 2020.

“I had some knowledge about brain structure, neuroplasticity and Western neuroscientific ideas before I went to Russia, – says Lobsang Phuntsok, monk researcher from Sera Jey monastery, – but two weeks in Moscow and St. Petersburg as well as further classes in our monasteries made my mind wide open: I deepened my understanding of the philosophy of science and new methods of brain studies. The most interesting things I have learnt were strong evidence of how differently Buddhist philosophy and Western science see the concepts of mind and consciousness; information about micro and macro levels of human brain processes; various methods of investigating the human brain, like CT, MRI, PET, EEG. We attended lectures of the leading neuroscientists – Prof. Konstantin Anokhin, Prof. Alexander Kaplan, Prof. Svyatoslav Medvedev. As a result of studying at Moscow State University and Institute of Human Brain of the Russian Academy of Sciences, I discovered lots of interesting ideas and enjoyed the beauty of the Russian scientific evolution.

“There are several reasons why I decided to join the group of monk researchers, – Lobsang Phuntsok continues. – I have been always keen to study science, particularly physics and neuroscience. My feeling is that being a monk and Buddhist spiritual practitioner, I can help to introduce to scientific field techniques of achieving a happy life by means of spiritual practices. This is very much in line with His Holiness the Dalai Lama’s vision and advice he has been given to all monks of 21st century”.

“Also, even though there are different definitions and concepts of consciousness and mind in Buddhist science and Western science, I am sure that in fact there must be substantial correlations of these different explanations. A lot of Western scientists have already started to investigate those correlations and I am interested to learn about their findings”.

“I think neuroscience research work will definitely become an important part of monastic life. However, it will be more effective if new scientific equipment is developed in the future that will be more appropriate to meet the objectives of conducting experiments in Tibetan Buddhist monasteries”.

In addition to specially trained monks, there are dozens of Buddhist practitioners who are involved in the project as volunteer test subjects. “They practice a huge variety of meditations. And we study how this or that type of meditation, this or that state of consciousness manifests itself in physiological reactions, – explained Svyatoslav Medvedev, head of the project, full member of the Russian Academy of Sciences. – We hope and dream that in the coming years, in accordance with His Holiness’s vision, the monastic community will have a whole cohort of monk researchers who will study meditation and related processes that occur in the human brain from the first-person position. The knowledge gained as a result of this work will be of great benefit for humanity”.

–Filed by the Office of Tibet, Moscow 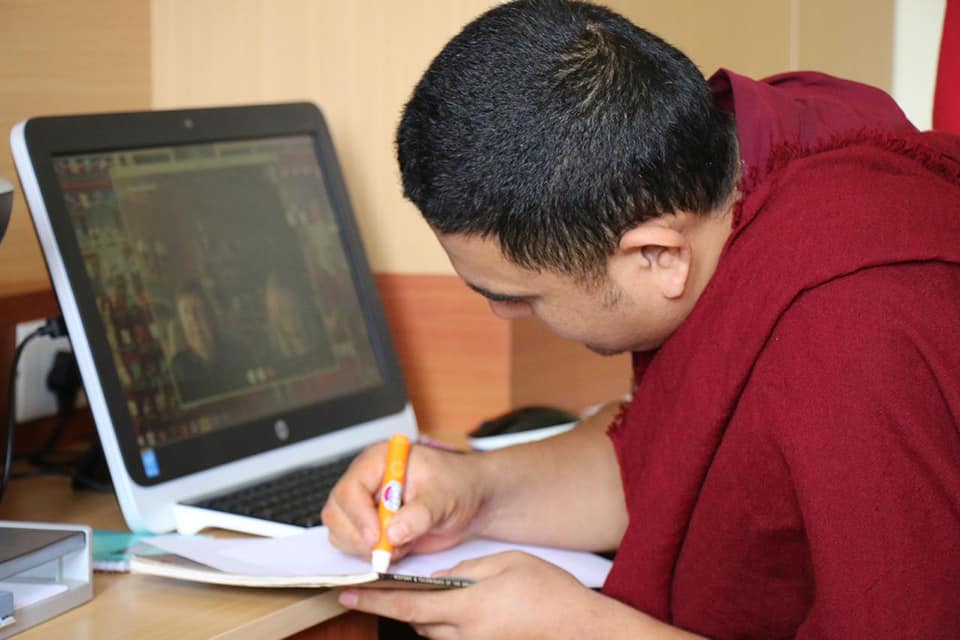 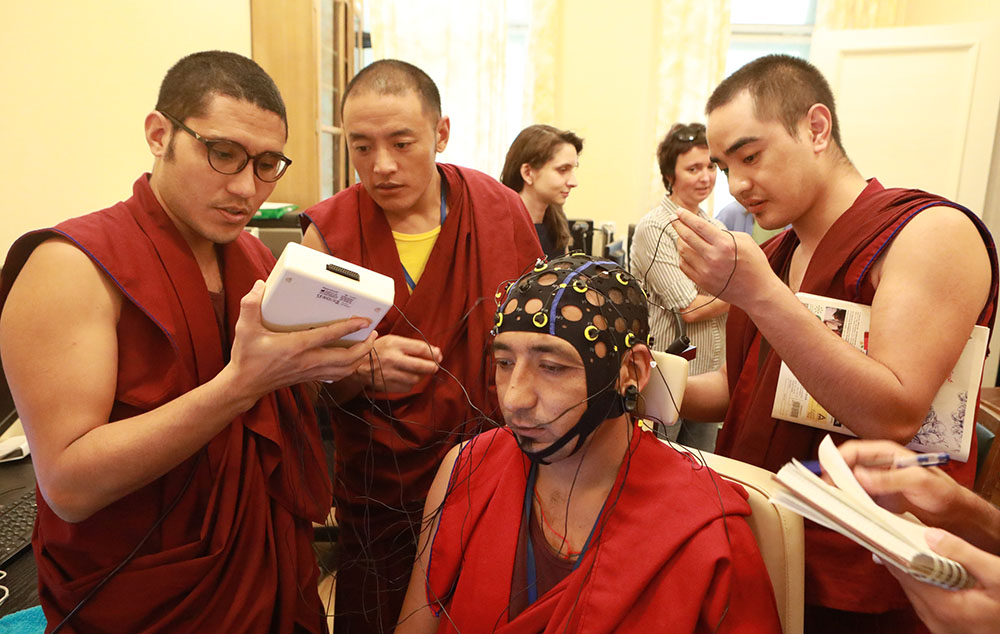 Tibetan monks of the first batch are undergoing training at the Moscow State University. 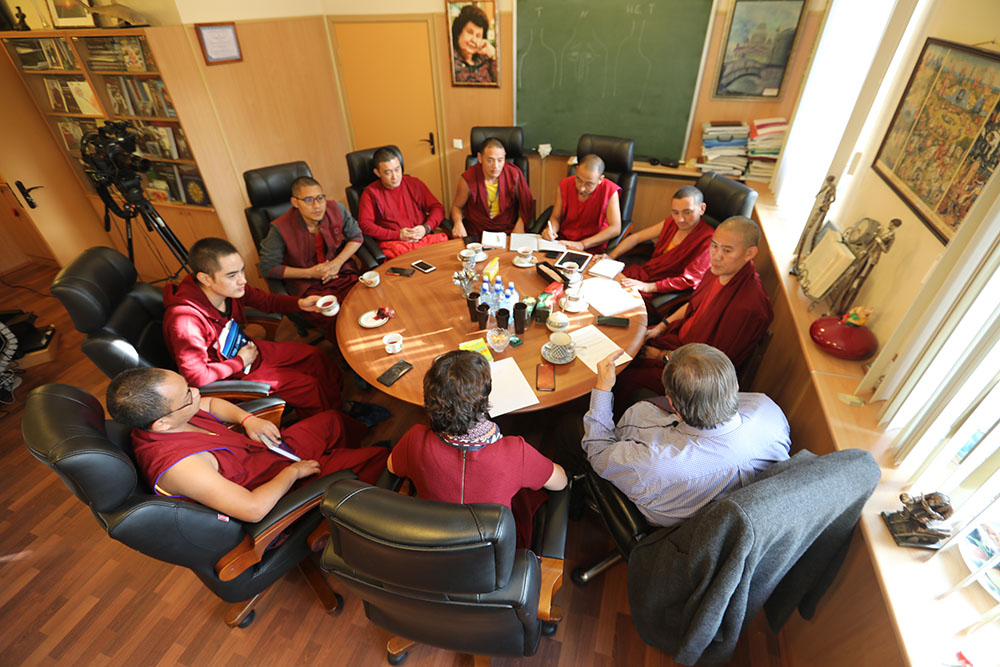 Tibetan monks of the first batch are having a discussion with Prof. Svyatoslav Medvedev, head of the project, full member of the Russian Academy of Sciences at the Institute of Human Brain (St. Petersburg).