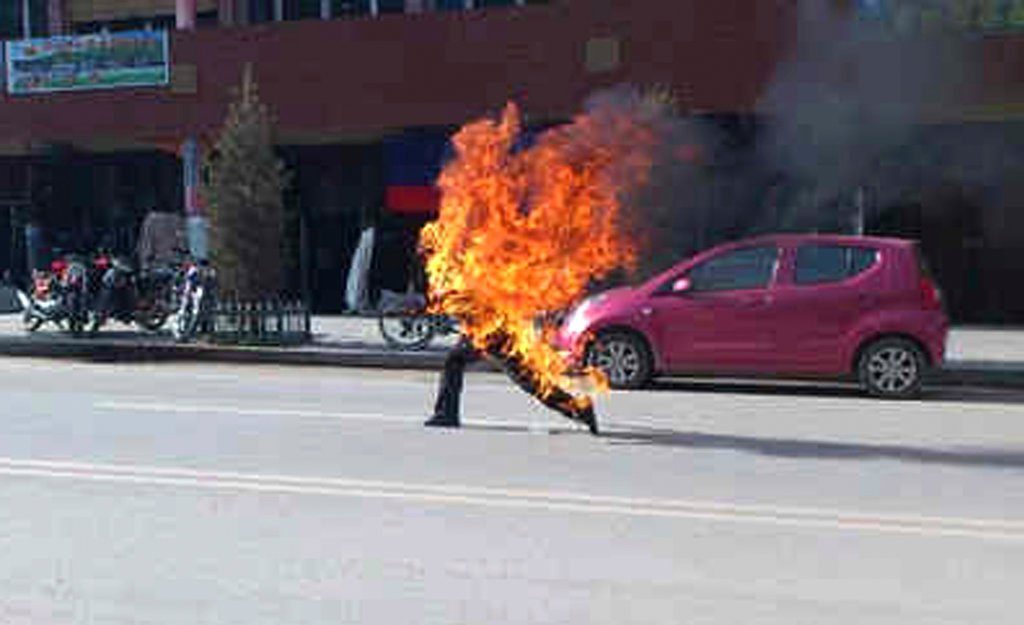 A Tibetan burns himself in an apparent self-immolation protest in eastern Tibet. (file pic)

As the wild fires that engulf southern California continue to grab headlines across the world, another fire, seemingly larger and more widespread, has been silently raging on in Tibet, the roof of the world.

Of the 151 people who have been forced by circumstances to set themselves on fire, the burning flame has consumed 129 lives. The sweeping wave of self- immolation began in 2009 in the aftermath of the nationwide uprising against China in 2008. Between 2012-13 alone, over a hundred people resorted to this desperate act to express their anguish at China’s increasingly repressive policies in their homeland.

The spate of self-immolations abated since last year after the Chinese government imposed heavy security measures and resorted to criminalization of self-immolators and family members in a bid to curtail this expression of discontent. However, news of sporadic incidents of self-immolation still trickles from inside Tibet. Last month, when the rest of the world was in a festive mood to ring in Christmas, elsewhere in northeast corner of Tibetan plateau, Konpe, a former Buddhist monk in his 30s, set himself alight and a day after, on the eve of Christmas, succumbed to his injuries.

The burning question is, why do Tibetans, young and old, resort to such painful act of setting themselves on fire and risk their precious lives? The President of Central Tibetan Administration Dr Lobsang Sangay attributed the genesis of Tibetan self-immolations to the repressive policies of the Chinese government in Tibet.

Religious repression, social marginalization, treating Tibetans as second-class citizens in their own land, exploitation of the poor, discriminatory policies undermining Tibetan language, among others, have been some of the key facets of China’s six-decade rule in Tibet. These failed policies have time and again exposed China’s disregard for the legitimate aspirations of the Tibetan people, and evinces China’s imperialist designs over Tibet and establishes its position as a colonial master.

With history dating back to more than 2,000 years, Tibet existed as an independent nation prior to China’s illegitimate occupation. However, despite Tibet’s unique cultural and linguistic heritage, China has looked at Tibet solely through a constricting prism of safeguarding their territorial integrity and maintaining stability.

In their quest to maintain this cult of stability, China has devised numerous policies, a combination of reward (economic) and punishment strategies to induce a desired behavior from the Tibetan people.

However, the truth of Chinese rule in Tibet is that, despite its arm-twisting, economic and financial inducements, the Tibetan people have defied and resisted and instead expressed unflinching faith in His Holiness the Dalai Lama and allegiance to Central Tibetan Administration which is the moral and legitimate representative of Tibetan people inside and outside Tibet.

For Tibetans inside Tibet, His Holiness is the custodian of their cultural identity and the symbol of freedom in Tibet.

Moreover, the Chinese government’s efforts to assimilate Tibetans into the mainstream Han culture and undermine Tibetan language and expressions of cultural identity has left the Tibetan people deeply suspicious of China’s motives.

By encouraging mass migration of Han Chinese people into Tibet, China has effectively made Tibetans a minority in their own land. As a result, the six million Tibetans are vastly outnumbered today by Chinese immigrants, who are given preferential treatment in education, jobs and private enterprises, making Tibetan language redundant and leaving the Tibetan people disenfranchised and marginalized in almost all sectors.

In the field of education, Tibetan students bear the brunt of prohibitive and discriminatory fees set in place by Chinese authorities, and inadequate facilities in rural areas.

It is because of such predatory nature of the Chinese rule in Tibet and the lawlessness it spawns that has driven Tibetans to resort to extreme measures such as self-immolation to protest against the very policy that threatens their identity and engenders cultural annihilation.

On the other hand, Tibet’s traditional leaders, the lamas and spiritual teachers who, preaching simple living, has given them a sense of identity, unity and spiritual belonging at a time of great uncertainty and disorientation.

And this is China’s real dilemma in Tibet. Although China physically rules Tibet, it could not win the hearts of the Tibetan people. It is the very conquering nature of Chinese rule in Tibet that has alienated Tibetans from their colonial masters.

The Chinese government is wary of the self-immolation protests, and is sensitive to anything that can be remotely interpreted as challenging Chinese rule.

Speaking about the self-immolation protests, Sonam Norbu Dagpo, Secretary of International Relations and official spokesperson of the Central Tibetan Administration, said: “China is obsessed with controlling every aspect of Tibetan lives. The fact that China monitors virtually every step of Tibetans has left Tibetans with no alternate agency to express their dissent but through self-immolation.”

In the Buddhist world, self-immolations have been one of the long-standing forms of protests. The image of Thich Nhat Hanh’s lotus in a sea of flame still resonates across the world. In Tibet, the self-immolations are an expression of anguish and dissent. It is also symbolic of Tibetans reclaiming their control over their lives.

It in a way has sent a message to China that that they may control Tibet, but they cannot control the hearts and minds of Tibetan people.

China’s handling of the self-immolations: complete censorship and criminalization of self-immolators evince China’s growing insecurity, and needless to say, their embarrassment over the same.

Vivid images of the red and yellow flames that have engulfed Tibet over the last nine years has captured the imagination of Tibet in the world’s eye. The only way forward for Chinese leadership to stop the self-immolation protests is to review their six decade old failed policies in Tibet and address the genuine and legitimate grievances of the Tibetan people inside Tibet, that is, freedom for Tibetan people and the rightful return of His Holiness the Dalai Lama back to Tibet. These demands have been echoed by every Tibetan self-immolator as they breathed their last amid the fiery flame that blazed and razed their body to ashes. 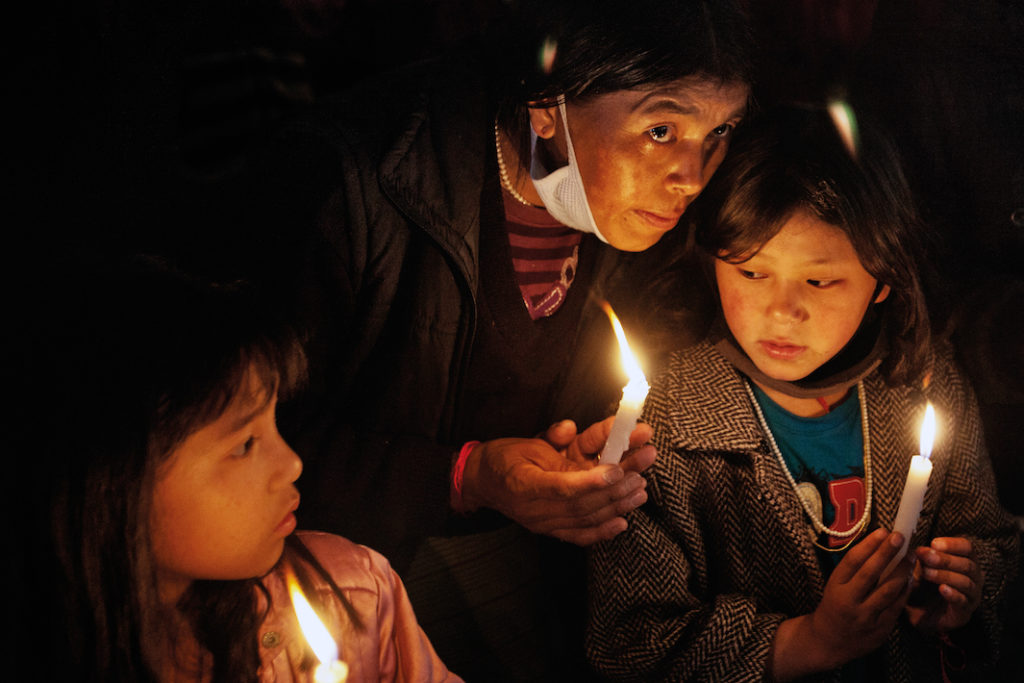 A Tibetan woman with her two children participate in a candle light vigil to mourn and honor Tibetans who have carried out self-immolations in order to protest the chinese occupation. Bodh Gaya, Bihar, India, 2012.