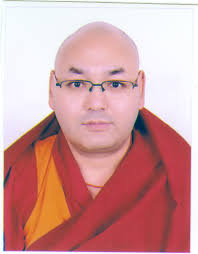 Dharamsala: The Speaker of Tibetan Parliament-in-Exile, Khenpo Sonam Tenphel will be going to attend the long life offering (Tenshug) conferred to His Holiness the 14th Dalai Lama as a guest per invitation on the auspicious 82nd Birth Anniversary of His Holiness at Ladakh on 6th July.

He is leaving for Ladakh via Delhi on 4th July and will be returning back to Dharamsala on 8th July.