Panel discussion: Renewing global advocacy for the release of the 11th Panchen Lama 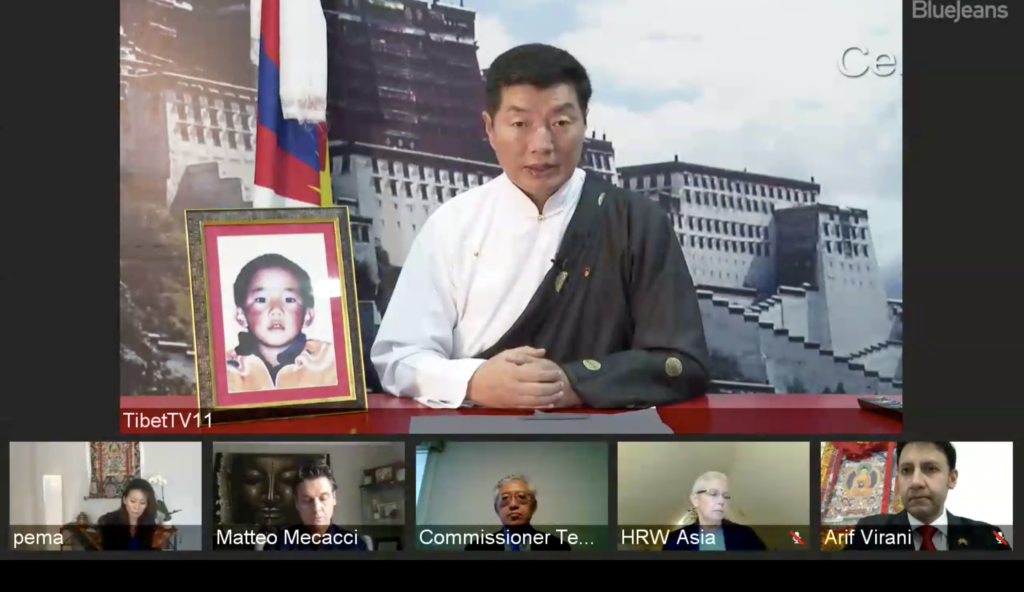 Dharamshala: China abducted six-year-old Kunzik Gedhun Choekyi Nyima on 17 May 1995 from his home in Nagchu region of Central Tibet days following His Holiness the Dalai Lama identified him as the 11th Panchen Lama, the second highest spiritual authority in Tibetan Buddhism. Today he is recognized as the world’s longest-held prisoners of conscience.

The enforced disappearance of the Panchen Lama for more than 2 decades not only symbolises China’s egregious violation of the religious freedom of Tibetan Buddhists, but also a politically driven effort to undermine and control Tibetan Buddhism.

As the Tibetan Buddhist community once again celebrate his 31st birthday in absentia, the Central Tibetan Administration, Tashi Lhunpo Monastery, the exile seat of the missing Panchen Lama, Tibet Support Groups, world leaders and parliamentarians, international bodies for religious freedom and rights groups have renewed the call for his immediate release.

The discussion was hosted online by the Tashi Lhunpo Monastery in Bylakuppe, on their Facebook account in keeping with the COVID-19 lockdown. The panel was moderated by Pema Tulotsang, Asia Officer, National Endowment for Democracy.

“Even though it is a day of celebration, however, unfortunately, the day also coincides with the 25 years of Gendun Choekyi Nyima’s disappearance,” said Sikyong Dr Lobsang Sangay remarking on the day’s significance while asserting that in the abduction of Gendun Choekyi Nyima, the Chinese government has denied his basic rights for 25 years in a row. Not only were the restrictions imposed on him but his family also had to suffer the injustice.

Despite the numerous appeals made by the Central Tibetan Administration, Tibet support groups, and Tibetan associations around the world to the U.N, the whereabout of Panchen Lama is still not identified said Sikyong, and noted that even today the Panchen Lama case continues to remain tragic. Unarguably, the situation of Gendun Choekyi Nyima reflects the tragic reality in Tibet.

In this particular reference, Sikyong highlighted that the 10th Panchen Lama was fearless, straightforward, and critical about the Chinese government’s policies which are undeniably reflected in his 70,000 words petition against the communist party leadership.

In the petition, explained Sikyong, the 10th Panchen Lama has highlighted in detail the number of monasteries destroyed, disrobement of monks and nuns, genocide of Tibetan culture, language, and identity, to name a few and argued that the report significantly repudiates China’s narrative on Tibet. The petition submitted by the 10th Panchen Lama clearly indicates that the oppression of Tibetan people was a deliberate attempt and strategy on the part of the Chinese government to destroy the very existence of Tibetan civilization and identity. Because of this report, he was incarcerated till 1977 and suffered enormously in prison often in solitary confinement. All this is well recorded in the autobiography of Bawa Phuntsok Wangyal.

“For Tibetans, Panchen Lama is a highly revered figure and for him to go through such level of torment is really heartbreaking and therefore, we owe a great deal to him,” Sikyong said.

Meanwhile, he urged the younger generation of Tibetan people to always remember the great contribution of the 10th Panchen Lama while rallying to support the case of Gedhun Choekyi Nyima.

Lastly, Sikyong thanked the U.S State Department, and the governments around the world that have responded and issued statements pressing China to release Gedhun Choekyi Nyima. He appealed that the campaign demanding the immediate release of 11th Panchen Lama must continue so that he is soon united with his people and be able to play his spiritual role in the Tibetan Buddhist world.

Abbot of Tashi Lhunpo Monastery, Zeekyab Rinpoche expressed grave concerns over the wellbeing of the Panchen Lama, as the Chinese government continues to refuse any reliable information on Rinpoches wellbeing even after 25 years

He sounded the urgency to give a clarion call for the immediate release of the Panchen Lama given the worsening state of situation and reluctance from the Chinese government.

“The CTA, Tashi Lhunpo Monastery, and sympathetic governments and NGOs have all collectively intensified their demands for the same. And, we will not rest until the issue is resolved!”. He concluded with prayers and strong resolve to bring the Panchen Lama to his rightful seat in Tibet and to his followers who await his safe return.

Sophie Richardson, China Director at Human Rights Watch spoke on the stance of HRW in the case of the disappearance of Gedhun Choekyi Nyima. Sophie vehemently asserted that the abduction and the consequent disappearance of the 11th Panchen Lama was ‘longest-running’ and ‘most egregious’ human rights violations of a quarter-century-long enforced disappearance. In doing so, she stated reflects the Chinese government’s extent to not only control the religion but to remake it to suit their political agenda.

“It is also an example of collective punishment not just for the Panchen Lama and his family but for Gyaltsen Norbu (Chinese elected Panchen Lama) and his family. Their lives were radically changed and their rights seriously violated essentially in order to control the appointment of the next Dalai Lama”, she attested.

She further explains that HRW is committed to continuing advocacy for Tibet just like it had for the last 25 years documenting serious human rights violations of Tibetan people including the forceful relocation of nomads, severe restrictions on community lives, and increasing restrictions on the religious activity.

In the meantime, she believes that it is also important that governments continue to pressurise Chinese authorities to free all of those Tibetans who have been unjustly detained including specifically the Panchen Lama.

Member of Canadian Parliament and Chair of Canadian Parliamentary Friends of Tibet Arif Virani, said, “At the time the world’s youngest political prisoner having disappeared on May 1995, three days after His Holiness recognized him as the 11th Panchen Lama. As Sikyong mentioned, this May 17 will mark 25 years in detention which is 25 years too long.”

Drawing in on the gravity of the case, MP Arif Virani agreed that it is a grave situation, “of Nelson Mandela-like proportion at this stage which is an egregious stain on the international human rights record.”

The former Constitutional human rights lawyer and the member of Canadian parliament said he has spoken consistently about the Tibetan cause, Tibetan religious freedom, His Holiness the Dalai Lama, the Middle Way Approach and significantly raised the case of Panchen Lama in the Canadian parliament. He also participated in 2018 hearing at the Canadian Parliamentarians’ Subcommittee on Foreign Affairs and International Development Foreign Affairs committee to question the Chinese delegation representing the Tibet Autonomous Region on the whereabouts of the Panchen Lama.

“The response I received is the simple response we have heard repeatedly since 2015 that Gedhun Choekyi Nyima is living a simple and normal life and he and his family do not wish to be disturbed,” he recalled.

Outlining Canda’s track record of International advocacy since Panchen Lama’s abduction in 1995, MP Virani said the Canadian government raised the case of Panchen Lama with the Chinese authorities in 1995 and have repeatedly sought from the Chinese government information on location, level of education and expected date of his return along with his parents. In 2014, Canada called to the United Nations High Commission for Human Rights and UN Special Rapporteur for Freedom of Religion to enable a visit to the Panchen Lama and addressed statements at the UNHRC criticizing China’s persecution of religious and ethnic minorities “specifically in Xinjiang and Tibet”.

Speaking briefly on the ongoing persecution of both the Tibetan Buddhists and Uyghur Muslims, MP Virani stressed that a commonality needs to be reinforced in terms of the two ongoing religious persecution. “I say that as a Muslim Canadian, as a Muslim parliamentarian representing a lot of Tibetans and I say that during the month of Ramadan which we are now in.”

He ended his comments by expressing his personal commitment as a member of parliament in Canada for the community of Parkdale—High Park and as Chair of the Parliamentary Friends of Tibet Group, “to personally raise the issue of Tibet wherever or whenever possible.”

“Not just with regard to the whereabouts of Panchen Lama, but with regards to also promoting he basic religious and linguistic freedoms of Tibetans as well as the Middle Way Approach. Thuje Che and Kadrin Che!”

Dr Tenzin Dorjee, Commissioner of the USCIRF expressed sadness at the paradoxical situation that both Tibetans and the Panchen Lama wouldn’t be able to celebrate his birthday while wishing him. He then spoke about his efforts as a USCIRF member where he adopted the Panchen Lama as a prisoner of conscience along with his colleagues VC Nadine Maenza and Congressman James McGovern. He added that he has been advocating for the Panchen Lama for 4 years demanding China to share the status of Panchen Lama’s health and whereabouts. Especially now, with the pandemic situation, he demanded videographic evidence of the Lama’s wellbeing.

Noting the Panchen Lama’s case as reflective of the larger religious freedom violations of Tibetans, he cited Article 22, a recent amendment by China, enabling Chinese government authority to interfere in matters of appointment of religious heads.

He urged the US Congress and President to implement the Magnitsky bill on Chinese officials responsible for the persecution of religious minorities, specifically referring to the Panchen Lama.

The Commissioner also thanked the Ambassador at large for International Religious Freedom and former USCIRF official Sam Brownback who travelled to India last year to meet with His Holiness the Dalai Lama to raise attention to the importance of religious freedom, the issue of reincarnation and its significance for the Tibetan people. He ended by wishing for Panchen Lama’s immediate release on behalf of all the Tibetans.

Lastly, President of the International Campaign for Tibet, Matteo Mecacci highlighting the systemic issues concerning Panchen Lama’s illegal detention, pointed at China’s efforts to control Tibetan society by seizing their centuries-old cherished institutions which includes the Panchen Lama and the Dalai Lama institution with the given objective of destroying Tibetan cultural identity which has benefited millions of Tibetan Buddhist practitioners across the world.

He referred to China’s geopolitical campaign, its attempt to rewrite history and engage in disinformation campaigns to further its colonialist interests. Though China has economic might and can temporarily suppress other countries with its economic muscle, it ultimately does not have control over human spirit and conscience, he said.

China’s lack of transparency with the world in case of the coronavirus pandemic is something Tibetans have continued to face for 60 years since Chinese occupation, he said, urging the world to support Tibet in its cause for basic freedoms from which the world also would gain.

Unless China ushers political reforms, he warned that it would continue to bring such catastrophes upon its own public and the world at large.

Stating ICT’s leadership in advocating in the US Congress for the passage of the Tibet Policy Act of 2019 which mandates sanctions on the Chinese government for egregious violations, Matteo noted the ripple effect of the important passage in the strengthening the discourse on the Tibet issue, the issue of the succession of the Dalai Lama and the religious freedom of Tibetans.

He hoped that this would force the UN to act accordingly and bring attention to the case of the disappearance of the Panchen Lama.