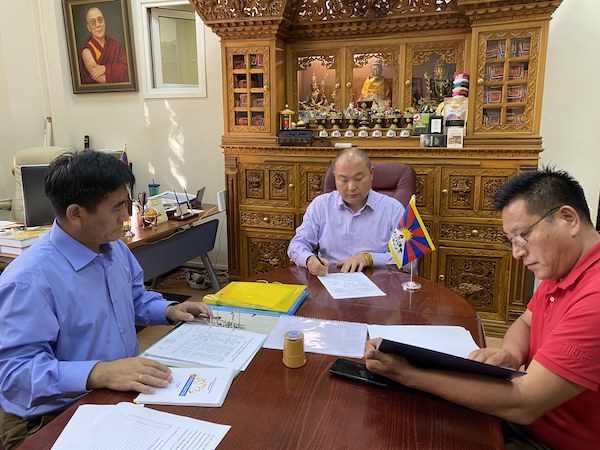 Karma Tenzing said “The last few years have given me a golden opportunity to serve CTA and H.H. the Dalai Lama, though my previous occupation was not as a civil servant of the CTA. The term as secretary widen my perspective of our struggle and movement and I learned a great deal about the vision of CTA mainly of the Middle way approach. I will always cherish the time served and personally commit to continue serving as a private citizen”. Incoming secretary Mr. Dava Tsering has previously served as Vice president and later as President of the Moscow Tibetan Community Also he has been regional coordinator for the “Central Council of Tibetan Medicine” to Russia since 2018.

Mr. Dava Tsering said “While I was given orientation, I was just amazed and overwhelmed by the responsibility as well as the task of our Office of Tibet. In the beginning, it made me a bit nervous but Karma Tenzin la helped me tremendously and boosted my confidence, and to know that Telo Rinpoche as the Honorary representative gave me even more confidence. It is a great honor and I am humbled to have this opportunity. Coming out of Tibet as a refugee in the late 1990s and later immigrating to Russia in 2004 which has been my second home for the last 17 years, I always wondered how I can serve CTA more broadly. This opportunity will give me what I wished for and I am looking forward to doing my best as a Tibetan”.