To reduce the raw material production cost, the Chinese have started using the local Tibetan population in Driru and other parts of Tibet extensively as labour. 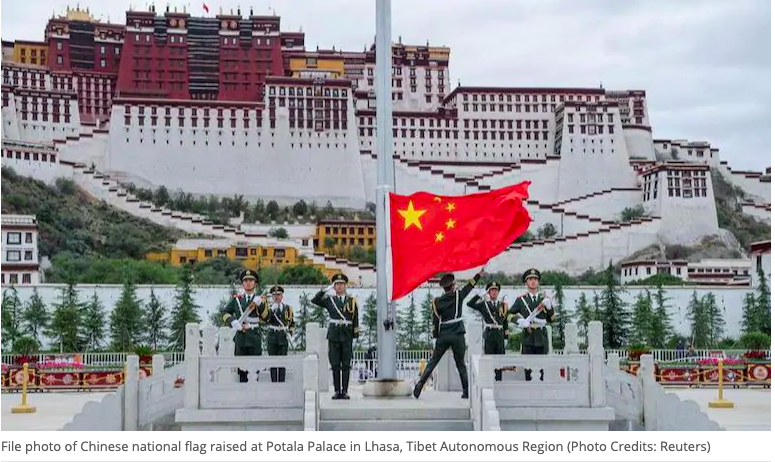 China continues to treat Tibet not as an autonomous region but as a colony, with rabid exploitation of its natural resources, forced labour camps and cultural subjugation.

The exploitation of minerals from Tibet and East Turkestan, now called Xinjiang, makes no meaningful contribution to the booming Chinese economy.

The mineral extractions and mining began in these occupied areas with small projects in Tsaidam Basin which was believed to be worth around $100bn or Yuan 600bn.

Chromium, copper, boron, lithium and many other rare earth minerals are found in Tibet. A large number of deposits varying in sizes, amounting to more than 120 minerals, including precious metals like uranium and gold have been found in the region. 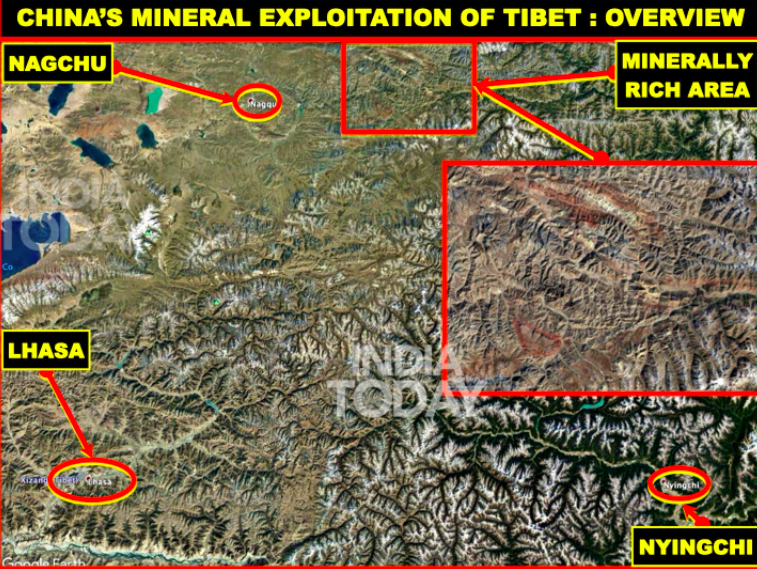 Latest satellite images of Driru county in Tibet’s northeastern prefecture of Nagchu provide a clear vision of how China is exploiting not only minerals but human resources in this area too.

Satellite images show that China has possibly found huge resources of minerals in Driru county. New roads have been constructed for ease of transportation of these minerals from the mining project sites.

The Chinese government had been exploiting mineral resources with impunity due to lack of communication channels, but commercially available satellite images now make it rather obvious. 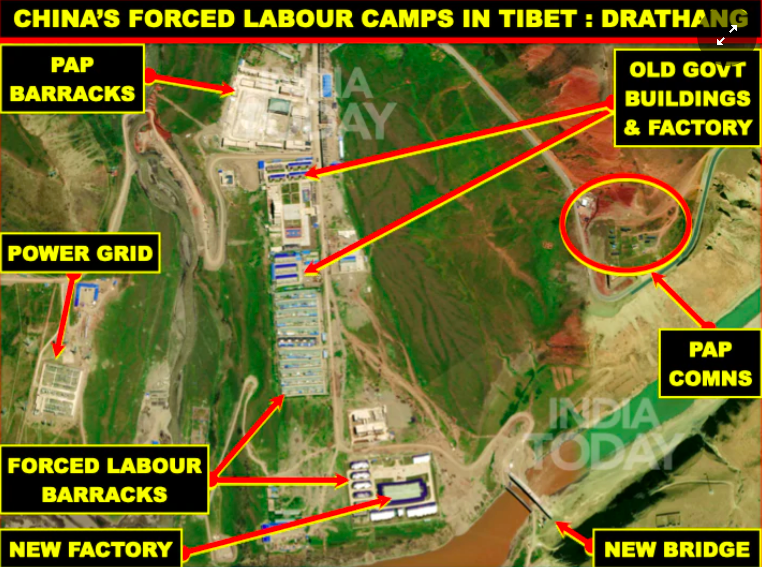 The Chinese government in Tibet under the previous secretary Chen Quanguo and the present one, Wu Yingjie, who was Quanguo’s deputy since 2011 before he was shifted to East Turkestan, has undertaken many harsh decisions such as the establishing Gulag-type concentration camps.

To reduce the raw material production cost, the Chinese government has started extensively using the local population as labour.

Villages and settlements have been neglected for the past 50 years and their population yearning for better lives.

Such vulnerable people are being exploited by the Chinese Communist Party (CCP) to work for a pittance thrown at them by the government-owned enterprises.

Large CCP buildings have been built in villages that impress the locals who have not even visited Nagchu town. The employment prospects override the pathetic living conditions provided by companies in barrack-type accommodations.

The layout of the newly built government buildings indicates that these are probably held by the People’s Armed Police (PAP) under the People’s Liberation Army.

Drathang village is a classic example. The new factory in this village has barracks for accommodating labour. The exact goods manufactured in these factories are not visible at this resolution. 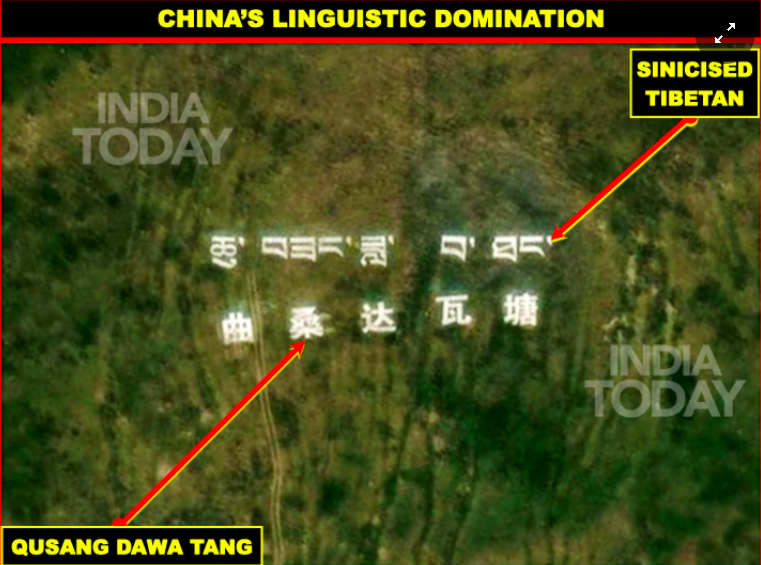 The area east of Nagchu town is completely mountainous, with villages located in valleys 4,000-4,500m high and mountains ranging from 5,000 to 6,000m.

The population in this area mainly consists of farmers and herdsmen who are very gullible. Their education is mainly religious, imparted by Gompas which was stopped by the Chinese government for more than 50 years after they occupied Tibet.

Now, the Chinese have started forcing Tibetans to learn only through the medium of the Chinese language. Tibetan is not studied even as a second language.

However, in these remote areas, China has begun a new type of domination of the local population by sinicising Tibetan language.

The chants of ‘Om Mane Padme Hum’ written on mountains is being changed to Chinese proverbs written in Chinese and sinicised Tibetan as shown in the image above. 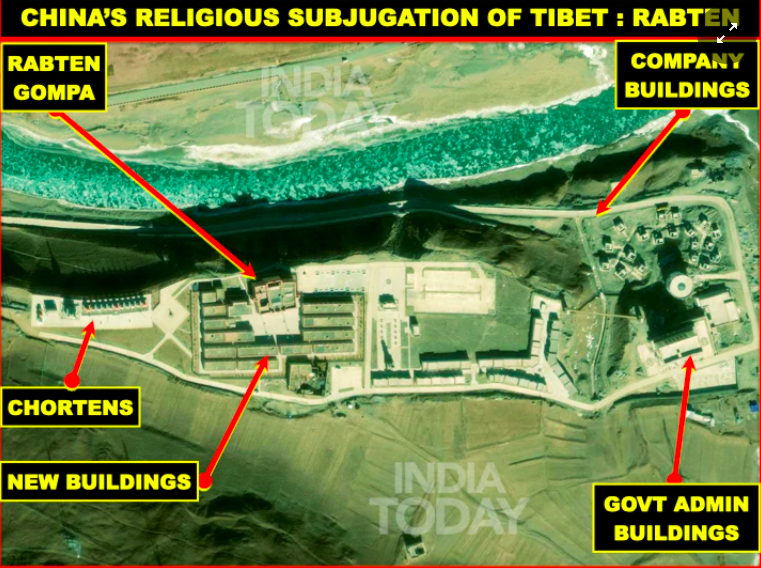 The Chinese government has been taking over the administration of all newly-built Gompas in this area. These Gompas were destroyed during 1950s Chinese occupation and later in 1960s so-called Cultural Revolution.

The main cultural custom followed by people in this area of preserving skulls of the dead after sky burial was banned by China for over 60 years is now being revived.

The Dodoka Gompa has now probably been merged with Rabten Gompa and sky burial system brought under government control.

The old buildings around the Gompa have been destroyed and now replaced with modern buildings for controlling the monks more effectively with security walls all around.

Cultural domination and religious subjugation assist the Chinese government-run agencies and companies to force locals to work for a pittance in the mining and other projects, most likely to produce cheap goods.

(Col Vinayak Bhat (Retd) is a consultant for India Today. A satellite imagery analyst, he served in the Indian Army for over 33 years)