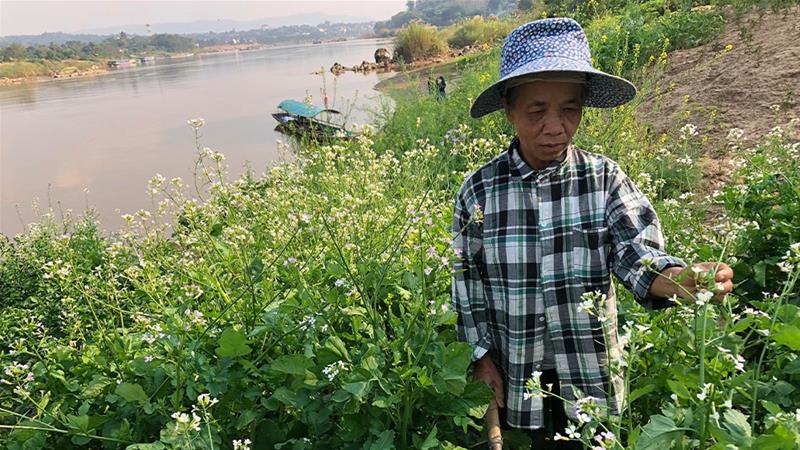 People along the Mekong are struggling with sharply fluctuation water levels as China tests dam equipment. This Thai woman said her garden on the river bank was damaged by flash floods as water was released from the upstream dam [International Rivers via Al Jazeera]

Phnom Penh, Cambodia – Water levels on the Mekong River, which flows through China and five other countries before emptying into the South China Sea, have dropped once again after Beijing revealed it was testing equipment at one of its 11 dams in the upper reaches of the vital waterway.

The Mekong River Commission (MRC), an inter-governmental body made up of representatives from Laos, Cambodia, Thailand, and Vietnam, said on December 31 that China would be testing its equipment, warning of a potential 50 percent drop in water outflows.

In Thailand, the lack of water has had severe consequences, said Pianporn Deetes, Thailand campaign coordinator for international rivers.

“In Chiang Khong, northern Thailand bordering Laos during the first week of this year, locals witnessed sudden water fluctuation; water in the Mekong increased then sharply dropped within a couple of days,” she told Al Jazeera in an email. “I was there [on Tuesday] and found that some local farmers lost their crops due to non-seasonal water fluctuation.”

Not only crops were affected, she said.

“Riverbank erosion is also severe. The water fluctuation also affected migratory fish that depend on the seasonal flood-drought circle of the river. Less fish, less or no income for fisherfolks. They told me this kind of damage has been ‘more of the same’.”

The Mekong is the world’s 12th-longest river, stretching 4,350 kilometres (2,703 miles) from China in the north to Vietnam in the south. 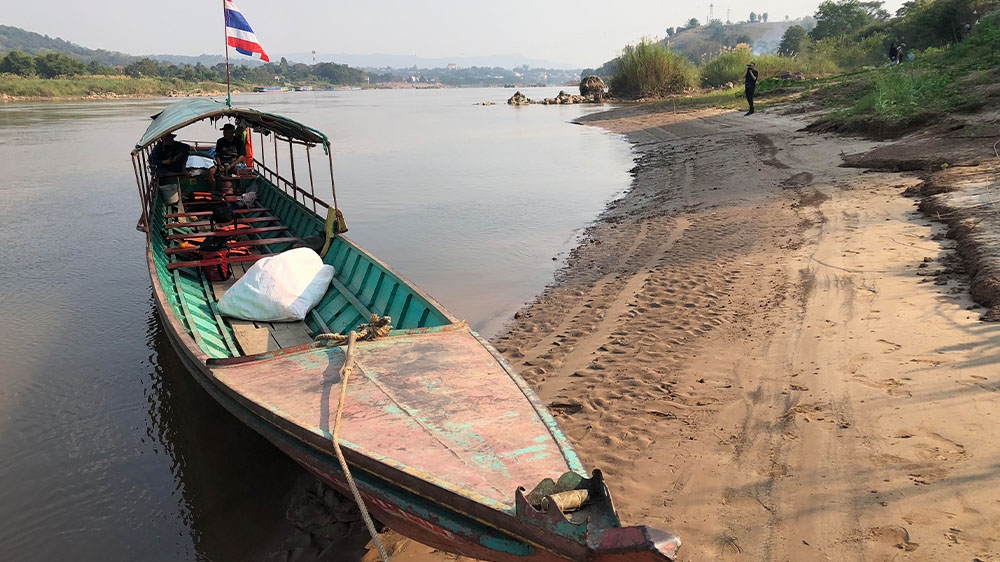 The water level covered the sand at the start of January. Picture taken on January 7 in northern Thailand [International Rivers via Al Jazeera]

Despite the worrying fluctuations and its impact on the river, experts said they were encouraged that China – for the first time – made its plan known beforehand, extending the hope of better coordination over the Mekong with countries downstream.

Brian Eyler, director of Stimson Center’s Southeast Asia programme, said while it remained unclear what kind of equipment testing was conducted, the notification suggested that dam operators were probably turning off turbines when testing their equipment, which led to the sudden drop in water levels downstream.

The water level in the Golden Triangle, where Thailand, Laos and Myanmar meet, had been reduced by approximately 40 percent from three metres to less than one, he said.

While the river would probably return to higher levels with the end of the testing, such fluctuations were a problem.

“For a river to be healthy it needs regular flow and not to be shocked with unnatural ups and downs,” Eyler said.

Such sudden drops and rises, he said, confused the natural fish movement in the river, leading to a drop in fish stock.

“This, in turn, results in depleted fish stocks for fishers in the Golden Triangle which traditionally thrives on fishing for their livelihood,” he told Al Jazeera in an email.

“Erratic operations at the Jinghong Dam have also caused sudden rises in the water level over the years and this has major implications for the Mekong’s ecological processes,” he said.

The Jinghong Dam began operations in 2008 and is one of the biggest in China, located in southern Yunnan province on the upper reaches of the Mekong.

With the dam in operation, the ecosystem of the river has also been affected, with river grass not growing during the dry season if water is released from the dam because it prevents sunlight from reaching the riverbed, Eyler added. 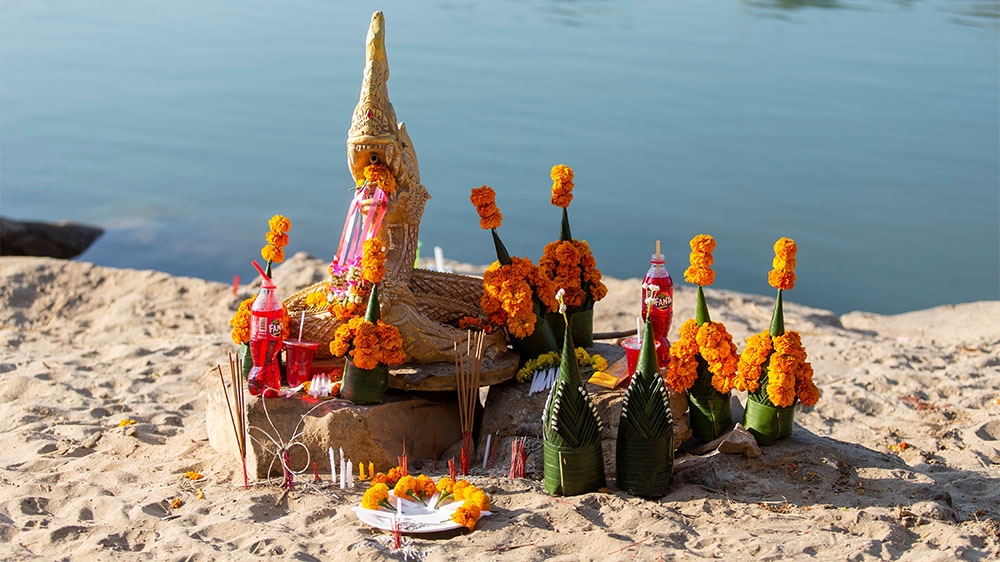 Offerings to the gods left by people praying for an increase in the water level on the banks of the Mekong outside the Lao capital, Vientiane [Phoonsab Thevongsa/Reuters]

“If they stored equipment along the river bank or grazed livestock there, these are often swept away due to the sudden releases. Millions of dollars of damage are incurred and this hits poor rural farmers in ways that are hard for us city folk to understand.”

Ian Baird, a University of Wisconsin researcher who studies the Mekong, echoed similar sentiments. He explained that even the short-term holding of water could have long-term consequences if the water level got too low. For example, the sun can heat low-level water to a point where some species find it difficult to survive, Baird said.

The situation was difficult to assess without more information, which had been a problem for years with China traditionally disclosing little information about its hydropower energy policy, Baird said.

Previous testing of dam equipment had led to flash floods and drops in water levels without China informing the public in advance.

The fact that China announced it would be testing equipment this time, he said, could indicate a shift in relations between China and MRC-countries.

“I think this is an interesting case because of the fact that China has publicly announced that this is going to happen, and this is rather unusual,” he said. “I’m not sure if this is a result of the MRC-China dialogue. This sort of thing has been going on for many years, and typically China doesn’t announce it.”

At the end of last year, the MRC and Chinese Lancang-Mekong Water Resources Cooperation Center signed a memorandum of understanding for increased cooperation.

Another scenario, Baird said, could explain the warning: this year’s drought. Given water levels had already declined, the consequences of not warning downstream countries could have been even greater.

“So I’m not sure if it’s because the impacts are going to be especially serious this year, or is it because they’re just being more open about what they’re doing?” he said.

A third reason, Baird said, could be that the traffic of bigger cargo ships had increased and China did not want to leave them stranded in the middle of the river between China and northern Thailand if water levels dropped. 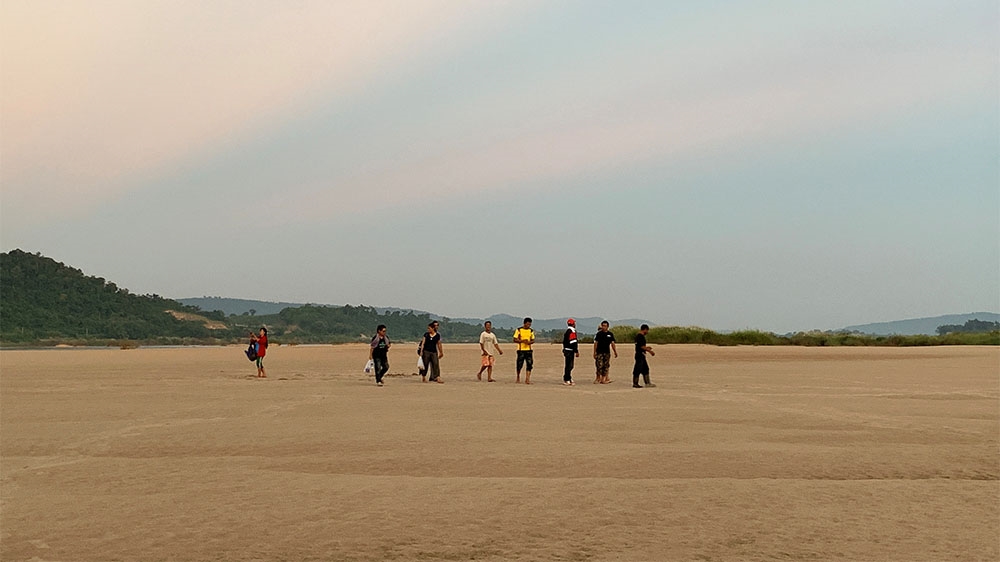 The Chinese embassy did not respond to requests for comment and multiple departments in the Chinese Ministry of Water Resources could not be reached.

The MRC Secretariat said in a statement to Al Jazeera that the announcement came because of enhanced cooperation between China and the MRC.

“The cooperation between the MRC and China has changed for the better in recent years,” the statement read. “We have deepened our technical and political cooperation through many ways.” The MRC cited joint studies and regular meetings among other forms of cooperation.

“With many hydropower projects now on the main stream (of the Mekong), the dams will require a proper coordination of cascade operation. In this case, an early warning or information sharing mechanism is now becoming more and more important than ever. And the public can expect regular flows of information around this in the future.”

But Eyler said that – despite it being a step in the right direction – the warning had not been issued early enough for communities to prepare properly for water shortages.

And Pianporn said simply releasing information was not enough.

“Thai authority and MRC might have announced what they received from China, but a critical question is: Are we accepting this as a new normal for the Mekong, its ecosystems, and its dwellers in the entire basin?” she asked.

“An announcement and warning is not enough. We need accountability and better management for the Mekong River.”