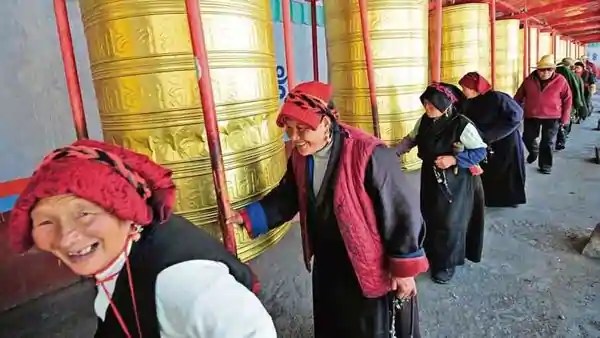 He is not wrong in thinking so. Over the past two decades, Beijing has used its growing power to limit the Dalai Lama’s global outreach, severely constrain protests in Tibet, and change the demography of the region. Transforming the Tibetan landscape and economy, it has created vested interests in favour of Beijing’s rule among Tibetans and Han Chinese alike. It has found numerous ways to put pressure on New Delhi to limit formal interactions with the Dharamsala-based Central Tibetan Administration. Even as the PLA has increased transgressions across the length of the India-Tibet border, Beijing has become more forceful in pressing its claims to the Indian state of Arunachal Pradesh, which it claims as “South Tibet”.

There is one major inescapable event that stands in the way of China having its way—that of identifying the next Dalai Lama once the ageing Tenzin Gyatso, the 14th Dalai Lama, passes away. Beijing’s plan to manage this is by invoking the so-called Golden Urn process—a bureaucratic device used by Emperor Qianlong of the Qing dynasty to manage the politics of reincarnation in the late-18th century by drawing lots. Just in case the lottery doesn’t go the way Beijing wants it to, it has declared that all reincarnations require the approval of the Chinese government. With the Panchen Lama, who by tradition is the preceptor of the Dalai Lama, already under Chinese control, Beijing has decided to wait out the Dalai Lama rather than negotiate with him. If things go by China’s plan, its problem with the institution of the Dalai Lama will end with Tenzin Gyatso’s departure.

Once it has Tibet completely in its bag, there is nothing to stop Beijing from asserting territorial claims all along the Himalayas, from Ladakh to Arunachal Pradesh. It is in this context that we must see Xi’s desire to shape a historical narrative that retrospectively legitimises the People Republic of China’s (PRC) annexation of Tibet. There was a time when Zhou Enlai and even Deng Xiaoping were amenable to a settlement where Beijing would accept Arunachal Pradesh as part of India were New Delhi to surrender claims to Aksai Chin. Now, and presumably in the future, with the balance of power shifting massively in favour of China, Beijing believes it can realize its claims without conceding anything to India, Nepal, Bhutan or Pakistan.

It is for this unsentimental reason that it is in India’s interests to ensure that China does not consolidate its hold over Tibet. To the extent that Beijing is insecure about the loyalties of ethnic Tibetans under its rule and about the external legitimacy of its annexation, it will find it harder to actively pursue territorial ambitions in the Himalayas. India’s interests with regard to Tibet are thus subtler than mere support for Tibetan aspirations for autonomy or freedom from Chinese rule. The Kautilyan logic of the rajamandala, after all, is structural.

There is no doubt that China is in as strong a position in Tibet than it ever was. It does not mean that the future it desires is a foregone conclusion. Beijing still does not control two important factors: how the Tibetan people conduct politics; and the existence of credible, legitimate spiritual and political leadership outside China’s control. India’s Tibet policy should concern itself with shaping these to our advantage. On the latter, New Delhi should ensure that senior lamas of all sects of Tibetan Buddhism, including the Dalai and Karmapa, remain free to pursue their religion and politics. With India hosting the largest population of ethnic Tibetans outside their homeland, there is no reason why the next incarnation of the Dalai Lama cannot be from, say, Karnataka.

The Indian government must neither accept the legitimacy of the Golden Urn process nor Beijing’s self-arrogated authority to recognize religious reincarnations. Even if the patron-priest relationship that Chinese emperors had with Tibetan high lamas might sometimes have given them privileges in religious matters, by no stretch of imagination can the atheist leaders of today’s PRC claim any.

India’s own policy on Tibet suffered a lack of focus over the past decade because New Delhi did not want to offend Beijing. This led to a degree of incoherence in the way different government departments and political actors approached the matter. There have been periodic, isolated acts of symbolism. However, unless backed by purposeful policy and substantive actions, symbolism alone is dangerous and can be counterproductive. The time has come for India to review its approach towards Tibet.

Nitin Pai is co-founder and director of The Takshashila Institution, an independent centre for research and education in public policy