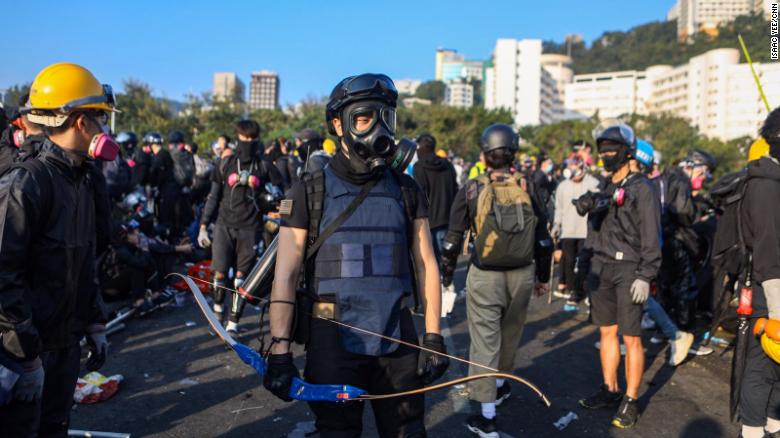 A protester armed with a bow is seen at the Chinese University of Hong Kong campus in Sha Tin on November 13, 2019.

Hong Kong (CNN)Hong Kong woke to a third consecutive day of travel chaos and debris littering the streets Wednesday, following fiery clashes across the city overnight and a prolonged and violent standoff at a university campus.

On Tuesday, hundreds of black-clad protesters, many of them students, attempted to block riot police from entering the prestigious and largely isolated Chinese University of Hong Kong (CUHK) near Tai Po. Under a barrage of constant tear gas, protesters hurled bricks and petrol bombs at police.
Smoke could be seen across parts of the New Territories, as protesters built massive bonfires from barricades and an abandoned car. The fierce confrontation continued well into the early hours, as police kept threatening a clearance of the campus. As of Wednesday mid-morning, several thousand students were on campus, many armed with petrol bombs, bows, and other impromptu weapons, as more supplies were brought to campus by car and on foot.
Also on Wednesday morning, police attempted to clear barricades in Kowloon Tong, and local residents and government workers cleared up debris and barricades in Mong Kok, where clashes between police and protesters — which saw numerous rounds of tear gas fired in the heavily built-up area — lasted until around 3 a.m.
The eruption of violence at CUHK follows some of the worst unrest seen in the semi-autonomous Chinese city since anti-government protests began nearly five months ago, with police describing the situation as on the “brink of a total breakdown.”
Unrest is expected to continue throughout the day, with CUHK as the main focus. Attention in the city has been focused on the campus, and dramatic pictures coming out of it overnight largely replaced those from earlier this week on front pages and social media, including the shooting of a protester by a police officer and the setting on fire of a man following a dispute with protesters Monday. 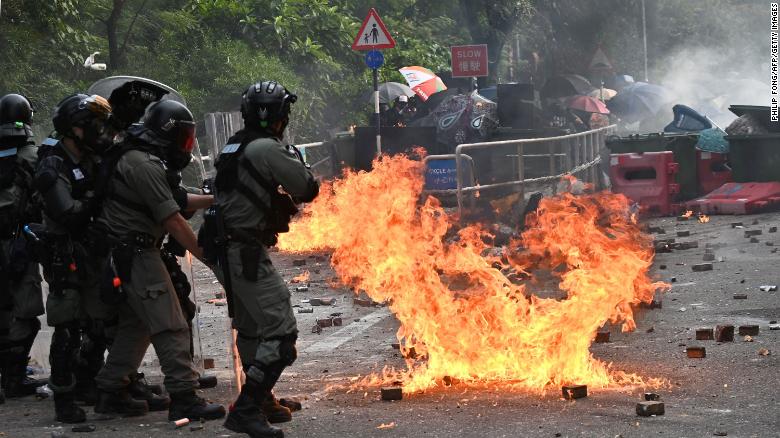 In one of the densest cities in the world, CUHK is a world apart. Its sprawling campus sits in the hills of city’s New Territories, accessed only by a handful of roads and one train station, which, combined with the fact that many students live on-site, give it a self-contained, small town-like feel.
Police had attempted to access the campus following demonstrations there as part of a call for citywide strikes. Many students regarded Tuesday’s police operation as an unwarranted encroachment and a threat to academic freedom, and reacted fiercely, circulating a message accusing police of laying “siege” to the university.
As it is private property, police can only enter the campus with a warrant, or if they are pursuing a suspect. The stand-off, which according to those on campus resulted in multiple injuries to protesters, continued into the early hours of the morning, as university officials tried to negotiate with police to get them to leave. In one dramatic incident, CUHK Vice-Chancellor Rocky Tuan was teargassed as he attempted to approach police lines to talk.
Protesters gather at the CUHK campus on Tuesday, November 12. Numerous fires were set and barricades were thrown up to prevent police advance.
Around 11:30 p.m. Tuesday, police said they had “reached a consensus in search for a peaceful solution,” but blamed students for spoiling it by throwing “bricks, petrol bombs, launched arrows and even fired a signal flare at Police officers.'”
“Such violence has reached a deadly level, posing a serious threat to Police officers and everyone at the scene. The rioters threw hard objects and petrol bombs onto Tolo Highway, endangering road users’ safety,” police said. “Police warn all rioters to stop all illegal and violent acts, and to leave immediately.”
Repeated rounds of tear gas were used by police, and there were reports of rubber bullets and other non-lethal rounds. In a statement, Amnesty International said the “scenes of police targeting CUHK with tear gas and rubber bullets are a disturbing escalation in tensions that increases the risk of further casualties.”
With protesters determined to continue defending the campus Wednesday, there was a strong likelihood of further clashes. In a statement, CUHK said, “the risk of conflict is extremely high, and many nearby roads are blocked, and many places and facilities on the campus have been severely damaged.”

This week has seen a major escalation in political unrest that has rocked the Asian financial hub for almost six months after the government introduced a now-shelved extradition bill with China.
Since then, demonstrations have expanded to include five major demands, including an independent inquiry into alleged police brutality and wider democratic reforms.
In response to the demands, the city government appointed a panel of overseas experts to assist Hong Kong’s longstanding Independent Police Complaints Council (IPCC), which is conducting a fact-finding study into alleged police misconduct during the protests.
But on Saturday, one of the experts tweeted a copy of the panel’s progress report, criticizing the IPCC’s investigative capabilities, and saying it needed to “substantially enhance its capacity” to assess evidence from witnesses and assemble a coherent account of the facts.
The nonstop protests have also sent retail and tourism numbers plunging, with the city falling into recession in October.
That violence reached new heights Monday, with three shocking incidents that seemed to demonstrate just how out of control the situation was getting on all sides. Early that morning, a traffic officer pulled his revolver on protesters and ended up shooting one in a scuffle. Soon afterward, another police officer was filmed driving his motorbike repeatedly at protesters in an apparent attempt to run them over — he has since been suspended.
In the same day, another shocking video showed a man being doused with a flammable liquid and set on fire after a dispute with protesters. He remains in hospital in a critical condition.
Hong Kong leader Carrie Lam said Monday that the city was being brought “to the brink of no return” by the violence, adding that “if there is any wishful thinking that by escalating violence the (Hong Kong) government will yield to pressure to satisfy protesters’ so-called demands, I’m making this clear that will not happen.”