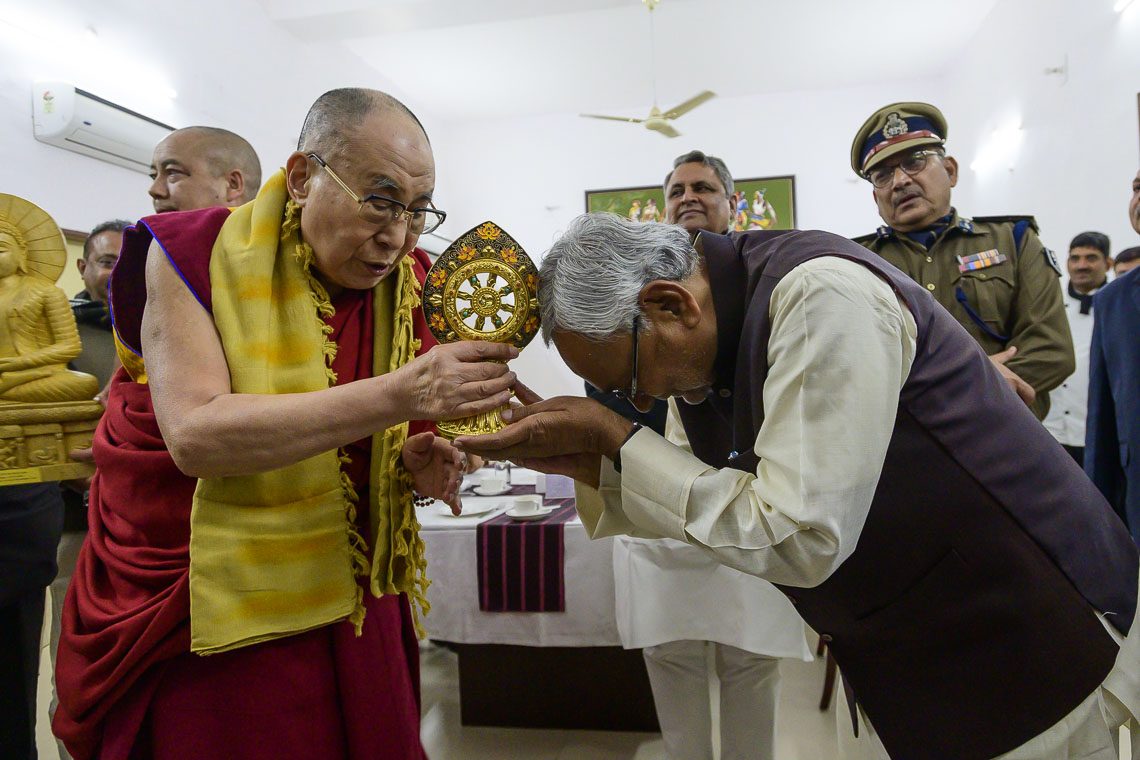 His Holiness the Dalai Lama presenting Bihar Chief Minister Hon Nitish Kumar with a Dharma wheel at the conclusion of their meeting at the Chief Minister’s residence in Patna, Bihar, 17 January 2020. Photo/Lobsang Tsering/OHHDL

Bodhgaya: Among His Holiness the Dalai Lama’s key commitments, the most recent concerns a revival of the value of ancient Indian knowledge among young Indians and the world at large. His Holiness has been a firm advocate of the rich ancient Indian understanding of the workings of the mind and emotions, which provides the techniques of mental training, such as meditation, developed by Indian traditions which are of great relevance today.

While this long-cherished commitment of His Holiness is reflected in his countless engagements and dialogue within the academic circles, the scientists and scholars, His Holiness very recently announced his latest endeavour towards the revival of the ancient Indian tradition—the establishment of an institute of Nalanda ancient studies.

During his address to the devotees in Bodhgaya on 16 January, His Holiness spoke about his plan to establish a Nalanda institute in Bodh Gaya, emphasising that the learning of Ancient Nalanda studies would be an “academic subject and not a religious one”.

He shared with the audience about the new developments in this project and his discussions with the Chief Minister of Bihar on the matter who had expressed keen interest to follow up with it.

His Holiness also appreciated the efforts of the CTA President Sikyong Dr Lobsang Sangay towards this initiative.

His Holiness asserted that India’s ancient knowledge which is based on logic and reasoning, seen from a secular and academic perspective, can be combined with modern education. He believes in India’s potentiality to create a more integrated and ethically grounded way of being in the world.

His Holiness has always expressed his regard for India as the “spiritual home of the renowned Nalanda Buddhist tradition” and his initiative is based on his keen desire “to have a second one near Bodhgaya”.

His Holiness’ proposal for inclusion of ‘secular ethics’ in the academic curriculum, has been adopted by the Delhi government into its ‘Happiness Curriculum’ in 2018, which turned into a great success, receiving widespread interest and acclaim nationally as well as globally.