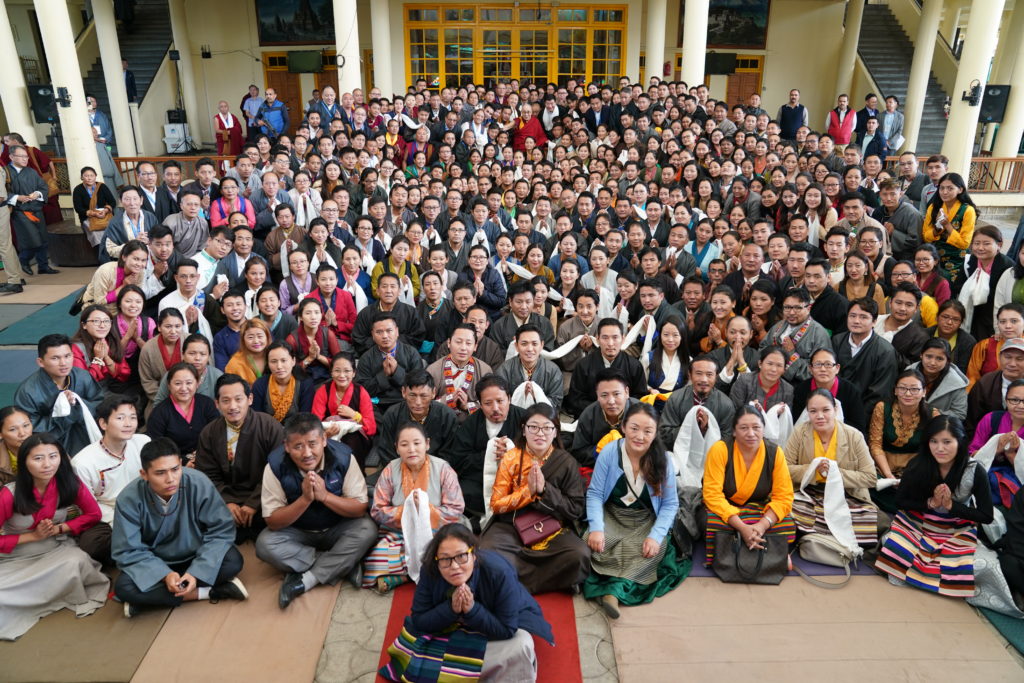 His Holiness the Dalai Lama with the staff of CTA led by the representatives of the three pillars of Tibetan Democracy and the Kalons. Photo/Tenzin Choejor/OOHHDL

Dharamshala: “If Tibetans inside Tibet who risk arrest and death on a daily basis are not losing hope, then we Tibetans in exile must not either. Together we have to keep up with them using freedoms and democratic rights we have here,” pronounced His Holiness the Dalai Lama during a special audience to the staff of Central Tibetan Administration yesterday at Tsuglakhang.

His Holiness acclaimed that the story of Tibetan refugees stands unique among the affairs of other refugees as he noted that Tibetans today have reached a milestone where they have not only preserved their culture and tradition but have successfully established a full-fledged democratic government in exile.

His Holiness deemed that part of this major accomplishment is attributed to the contributions of both the present and ex-officials of the Central Tibetan Administration.

“When the People’s Liberation Army first invaded Tibet in 1959 and carried out mass oppression of the Tibetan people, they didn’t expect Tibetans to come back stronger than ever after 60 years of oppression. They believed they had destroyed the core existence of Tibetans,” said His Holiness.

His Holiness extolled the determination and commitment of his people for not having lost a speck of hope in the fact of gut-wrenching hardship of 1959 and the subsequent escape into exile.

Further speaking, His Holiness mentioned that with the support of the Indian government, Tibetans were able to establish schools and monasteries preserving Tibetan language, culture, and religion inspired by Nalanda tradition. But the Tibetans didn’t just stop there for they have promoted that knowledge to the outside world. He assured that Tibetans can take pride in themselves for that.

His Holiness commended the staff of CTA and the Tibetan leadership for working extra hard in particular for the cause and further urged them to continue the noble work.