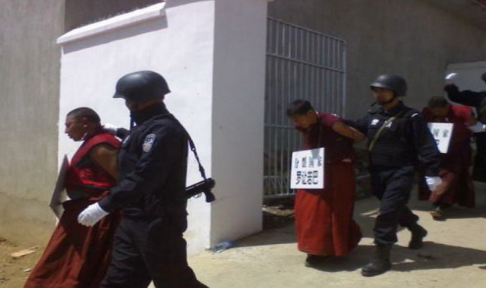 Tibetan monks with placards around their neck being forcibly taken away by Chinese police in 2011.

The Intergroup in its fourth annual report has analysed 122 countries on quantitative basis with 30 focal countries assessed both on quantitative and qualitative perspectives. The first group of focal countries were selected based on the countries’ track record of being the worst FORB violators and China is part of this. The assessment criteria of the Intergroup were “drafted on the basis of international law”, which in principle means that countries like China which is categorised as “severe violations” “are likely to be in breach of international law” where there are “systemic attacks against person exercising Freedom of Religion or Belief.

The Intergroup in its report has raised specific concerns about the “severe restrictions faced by Tibetan Buddhists in the country including outside the Tibet Autonomous Region (TAR).” The Tibetan Buddhists are “not free to venerate the Dalai Lama openly, to proselytise in public or meet in unregistered places of worship.” The destruction of the Larung Gar Buddhist Institute in 2016 was “Beijing’s desire to eviscerate the teaching and study of Tibetan Buddhism.” It further noted that the Chinese Government during 2016 has “repeatedly vilified the Dalai Lama and accused him of blasphemy and reinforced its restrictions against lawyers and human rights defenders” and also highlighted its concern of China using the new Counterterrorism law to “criminalise peaceful expressions of religious belief.”

It further raised concerns about the severe societal discrimination faced by Uighur Muslims and Tibetan Buddhists in employment, housing and business opportunities and that the Government of China physically abuses, detains, arrests, tortures, sentences to prison or harasses adherents of both registered and unregistered religious groups for activities related to their religious beliefs and practices. It has reported the documented evidences that “at least 65,000 organs each year are extracted from prisoners of conscience, primarily Falun Gong prisoners (and) are sourced for wealthy Chinese citizens and foreigners.”

The intergroup presented the report to the European Parliament and has recommended the European Union (EU) to “use its dialogue with China to raise concerns about the deteriorating situation.” In the light of the pending negotiation process between EU and China on the Comprehensive Agreement on Investment, the Intergroup has recommended that “EU should ensure that a chapter on human rights includes a meaningful dialogue between the EU and China on the promotion and protection of human rights and fundamental freedoms as laid down in international human rights instruments.”