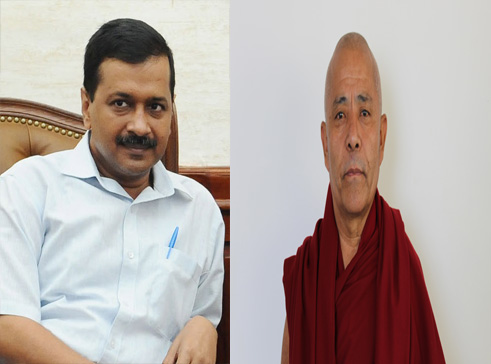 Dharamshala: Deputy Speaker Acharya Yeshi Phuntsok, on behalf of Tibetan Parliament in Exile, congratulates CM Arvind Kejriwal and the Aam Aadmi Party (AAP) for the victory of Delhi Legislative Assembly election and for being re-elected as the Chief Minister of Delhi for the third consecutive term.

In a congratulatory letter to Shri Arvind Kejriwal, Deputy Speaker wrote, “Your Excellency and your political party have rendered unwavering support to the cause of Tibet. We express our sincere gratitude for the support. Our Tibetan Parliamentary Delegations have also had the privilege of meeting you several times in Delhi, for which we are extremely thankful.”

“According to the vision of His Holiness the Dalai Lama, Your State government has adopted and incorporated Happiness Curriculum in the government schools from nursery to class 8 with an aim to train the young minds to make them happy, confident and content human beings and for developing their personality, which was also officially inaugurated by His Holiness the Dalai Lama. Now that it is practically being carried out in the schools, I would like to extend my sincere gratitude and appreciation. This will undoubtedly be beneficial for future generations,” he wrote.

He further wrote, “Government of Delhi has also provided support and facilities for the Tibetans residing in Delhi particularly in New Aruna Nagar colony and Budh Vihar. Your government has especially helped the Tibetan Winter Market of Lal Quila after the unfortunate incident of fire mishap in 2016. I would like to thank you from the depth of my heart and I hope you will continue to support the Tibetans in Delhi.”

“Your Hon’ble sir and your party have supported the just cause of Tibet. I hope that you will continue the support. I wish you great success in meeting the hopes and expectations of the people of Delhi. I pray for success in all your future endeavours.”

Deputy Speaker concluded the congratulatory letter stating, “Our Parliamentary Delegation also look forward to meeting you in the near future. Once again on behalf of Tibetans in and outside Tibet, I heartily congratulate you on being re-elected as the Chief Minister.”