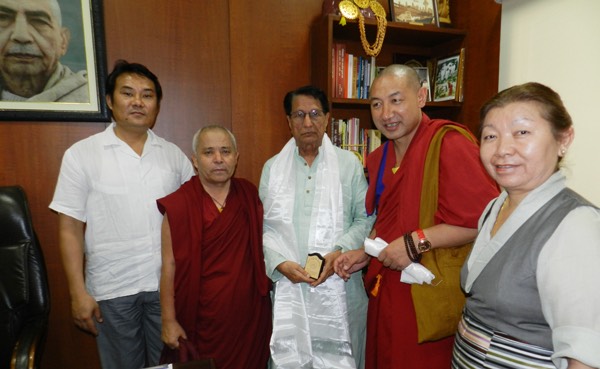 In a letter written to Shri Jayant Chaudhary, former MP and son of Shri Ajit Ji, the Deputy Speaker wrote, “It is with immense sorrow that we learned the sad news of demise of your beloved father hon’ble late. Shri Chaudhary Ajit Singh ji. Shri Ajit ji was an Indian politician, founder and chief of the Rashtriya Lok Dal, a political party in Uttar Pradesh. Through his long and rich career, he served as a Member of Parliament for eight terms, including one term as a member of Rajya Sabha and also served as the Union Minister four times. He was also a former member of All Party Indian Parliamentary Forum for Tibet (APIPFT). He will always be remembered as one of the influential leaders who served selflessly for the nation and the people of this country.”

“Hon’ble Sir, your family’s unwavering and genuine support towards the just cause of Tibet started with your late forefather his excellency Chaudhary Charan Singh ji who was the former Prime Minister of India. Therefore, we Tibetans regard your family as one of the treasured and a great family who always stood up with the truth and genuinely supported our cause. Shri Ajit ji had the honour to audience with His Holiness the 14th Dalai Lama in 1990’s in Dharamshala, Himachal Pradesh. During Shri Ajit ji’s term as the union Minister and Member of Parliament, Tibetan Parliamentary delegation and I personally had the privilege to meet and interact with your late father and your kind self in Delhi several times. He was one of the prominent leaders that we Tibetans turn to for advice and guidance. Shri Ajit ji and your kind self has taken part in numerous Tibetan Political movements and conventions related to Tibet issues. Accordingly, I would like to convey my heartiest gratitude to your late forefather Shri Chaudhary Charan Singh ji, your late father Shri Ajit ji and the whole family for the genuine and unwavering support. We are hopeful to receive an opportunity to meet with you again in the succeeding years.”

“The sad demise of your father hon’ble Shri Ajit ji is a huge tragedy and a great loss to your family, to the Party and to us Tibetans. On behalf of the Tibetans residing all over the world and the 16th Tibetan Parliament-in-Exile, I take this time to express my deepest condolence to your family and his followers. We Tibetans will always remember his long-standing support to our cause. I pray to god to embrace you and your family in comfort during this difficult time. May the departed soul rest in peace.”