New Delhi, Berlin, Canberra and Dharamshala: “The respect and influence earned by the Dalai Lama over past six decades of his exile is not only a great asset just for the people of Tibet and their freedom struggle against Chinese colonialism, but he has also emerged as a great asset for other nations like East Turkistan and South Mongolia who are fighting the same enemy for their own freedom,” this was one of many common observations made by leading experts in an international webinar, organized to commemorate the 87th birthday of HH the Dalai Lama.

This webinar was organized jointly by the Centre for Himalayan Asia Studies and Engagement (CHASE) and Tibetan Youth Congress (TYC) on subject “CHALLENGES BEFORE THE DALAI LAMA” on 3rd July evening. Panelist experts who participated in their presentations were Mr. Kai Mueller, the Executive Director of the International Campaign for Tibet (ICT) for Germany from Berlin; Ms. Nurgul Sawut, a leading Uyghur leader and the Executive Chairperson of Uyghur Freedom Forum (UFF) from Canberra, Australia; and Ms. Lhagyari Namgyal Dolkar a popular Tibetan leader and a Member of Tibetan Parliament from Dharamshala. Mr. Vijay Kranti, Chairman of CHASE and a veteran Tibetologist moderated the discussion.

Some major issues which were discussed included China’s claims about its exclusive rights to select the next incarnational of Dalai Lama and how the Dalai Lama is meeting this challenge; significance of Dalai Lama for people of Tibet, East Turkistan (Xinjiang), South Mongolia (Inner Mongolia), Hong Kong and the Democracy Movement inside China; the ongoing cultural genocide inside Chinese occupied Tibet and the resulting oppressive policies of Beijing government on Tibetan language, Tibetan Buddhism, forcible brainwashing of Tibetan children and the destruction of social fiber of Tibet; and the severe ecological damage happening in Tibet due to reckless exploitation of natural resources of Tibet.

Ms. Nurgul Sawut pointed out that besides leading the Tibetan people in their liberation struggle against China’s colonialism he has also emerged as an equal asset for other nations like East Turkistan and South Mongolia who are fighting the same enemy for their own freedom. She said that she and her fellow Uyghur countrymen are highly impressed by the discipline and organization skills demonstrated by the Tibetan people under the leadership of His Holiness the Dalai Lama in establishing and the functioning of their government-in-exile. She said that the Uygur people are also hoping to establish an equally effective government-in-exile to fight back against China’s colonial rule on East Turkistan. She especially pointed out the Dalai Lama’s wisdom in separating politics and religion from Tibet’s freedom struggle.

Ms. Nurgul said that before China started its current campaign of destroying the religious and other cultural institutions in East Turkistan and widespread internment of Uyghur and other Turkic people, it had already refined these skills in Tibet over past decades. The world did not realize the impact of these policies on Tibet because of very small population of Tibet. But these internment camps and destruction of mosques in East Turkistan have come to international attention because of the massive size of affected population. She recalled terrifying memories of July 2009 when Chinese Army and police shut down electricity in Urumqi city of East Turkistan, pulled out thousands of Uyghur citizens from their homes and massacred them in the streets. “It was the Dalai Lama who was the first among those international personalities who spoke in favour of and supported the Uyghur people in this tragic moment,” she said.

Mr. Kai Mueller’s main focus was on the ongoing cultural-genocide in Tibet which, he says, is one of major challenges facing the Dalai Lama and his countrymen today. ”The onslaught of the Chinese Communist Party (CCP) onto the Tibetan culture is systematic, gradual and tremendously consequential for the Tibetan culture”, he said. He spoke in details about China’s onslaught on three major areas which are education and language, religion and the Tibetan way of life. Beijing’s policy of replacing Tibetan language with the Chinese in schools as the language of instruction has caused serious damage to the Tibetan society. At the same time, new campaign of China to forcibly put very young Tibetan children into Chinese boarding schools is aimed at brainwashing an entire generation of Tibetans with Chinese communist propaganda.

Mr. Mueller expressed concern over China’s policy of relocating nearly two million Tibetan citizens, especially the nomads, from their traditional places to distant ones just to grab their productive lands and to detach them from their social and cultural roots. “Unfortunately, all this is being done on false pretexts like saving the environment or improving their socio-economic condition,” he said.

He gave examples to show how many though leaders who include intellectuals and writers, are being persecuted just for peaceful expression of opinion. In many cases their expression is not even of political nature. He expressed concern that the CCP is now claiming its authority over the appointment of the next Dalai Lama. “This strikes at the heart of Tibetan Buddhist religion. It is a protected standard of international law to determine and appoint one’s clergy without state interference,” he said.

However Ms. Lhagyari Namgyal Dolkar, a leading Tibetan Parliamentarian, assertively claimed that the people of Tibet are not going to let China’s plans to install a puppet Dalai Lama as the ‘reincarnation’ of present one succeed. Emphasizing the centrality of the institution of Dalai Lama in the Tibetan system and the achievements of the present 14th Dalai Lama she said that he has empowered the Tibetans and the Tibetan nation, both inside Tibet as well as in exile, so well that they can stand up to all challenges from the Chinese regime. Giving examples of this empowerment she said that by the establishment of a democratic system and by winning hearts of millions of people across the world the present Dalai Lama has given a new self-confidence and determination to all Tibetan generations, especially during his six decades of exile.

Referring to frequent use of insulting and aggressive language against the present Dalai Lama the Chinese leaders have not only once and again proven the centrality of the Dalai Lama to the Tibetan issue, but they have also exposed their own failure and vulnerability as compared to him.

Challenging China’s claims that Tibet has been always a part of China and the Chinese rulers’ demand from Tibetans to accept this claim, she said that the communist rulers of China want us to change the history which Tibetans have refused to accept.

In his vote of thanks Mr. Sonam Tsering, the co-host of the webinar and General Secretary of TYC, said that the present Dalai Lama’s towering personality has won praise of not only the Tibetan people but of the entire world community also. His message of peace, non-violence and Universal Responsibility has become a guiding light for the world community today. He assured the audience that the present Dalai Lama himself and the Tibetan community whom he has empowered enormously over recent decades, are capable of handling the Chinese onslaught on Tibet successfully. 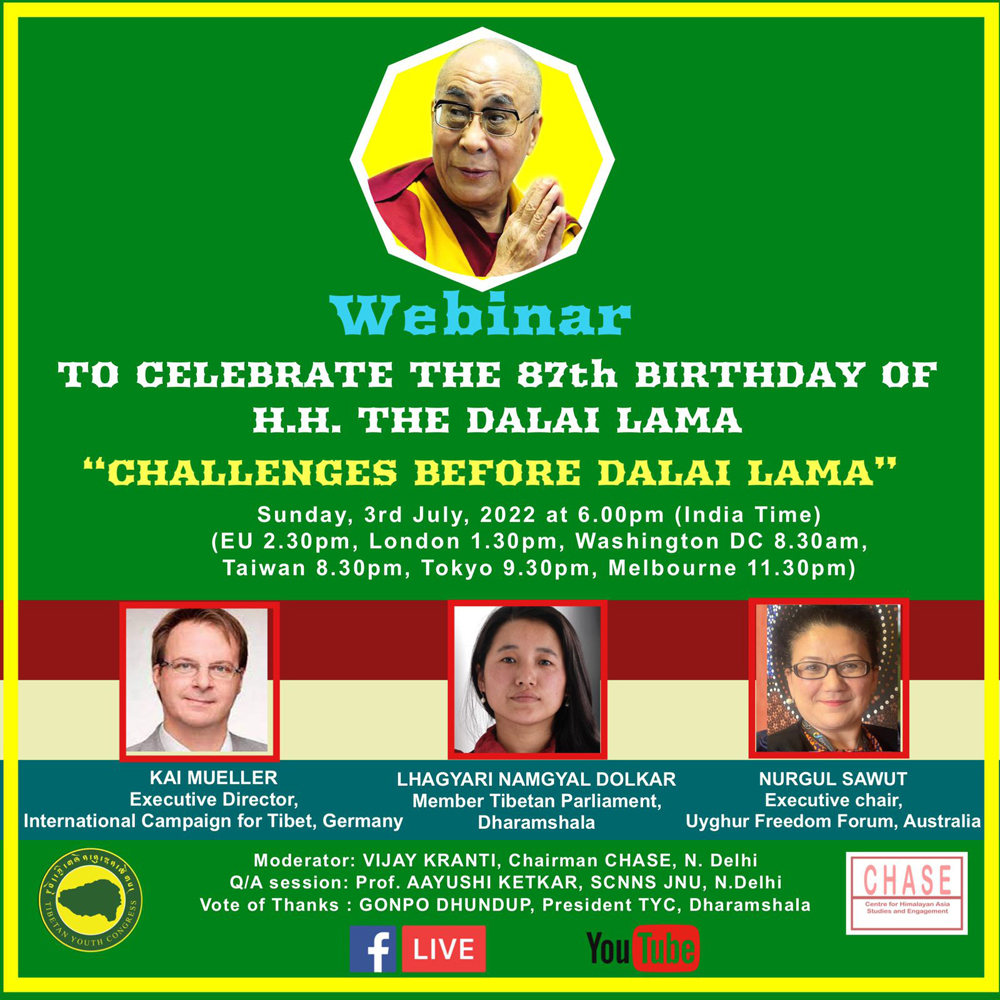