As the legitimate representative of the six million Tibetans, the Central Tibetan Administration (CTA) launches a month-long global advocacy initiative through its Offices of Tibet. This global advocacy will be carried out from 25 April, the birthday of Gedhun Choekyi Nyima, through 17 May, marking the 25th year of his enforced disappearance.

With the whole world spread under the jurisdiction of the 12 Offices of Tibet, the CTA aims to amplify the call for Gedhun Choekyi Nyima’s release and for China to disclose verifiable information on his current well-being and whereabouts.

CTA President Dr Lobsang Sangay remarked, “As we celebrate Gedhun Choekyi Nyima’s birthday, we also remember his disappearance for the last 25 years. To press on the Chinese government for his immediate release, the CTA has launched a global campaign demanding his immediate release. Unfortunately, because of the coronavirus pandemic which originated in Wuhan, we are not able to do the physical lobbying but we are doing virtual lobbying all over the world. Mainly our Offices of Tibet around the world, in partnership with Tibet Support Groups and Tibetan Associations, will participate in month-long events all over the world from 25 April to 17 May, the day he disappeared or got kidnapped. We will have petitions submitted at various governments particularly to the United Nations and specifically to the Commission on Rights of Child, and Working Group on Enforced Disappearance in Geneva.”

While urging the United Nations to hold a hearing about the case of Gedhun Choekyi Nyima and demand his immediate release, President Sangay said, “I hope the Chinese government will pay heed to the global appeal and at least allow Gedhun Choekyi Nyima to be with his family members, to be with the Tibetan community in Tibet. I want to thank our friends, Tibet Support Groups and Tibetan Associations around the world for participating in this effort. This is a case of human rights; this is a case of religious freedom, which are fundamental rights of the Tibetan people and humanity as a whole.”

The UN, EU & Human Rights Desk of the Department of Information & International Relations, CTA undertakes the month-long global advocacy campaign, including at the United Nations, to press China further on the case of the “missing” Panchen Lama and to sensitize the freedom-loving people across the world, including friends of Tibet, to stand in solidarity in this endeavour to free him.

To this day, the fate of Tibet’s Panchen Gedhun Choekyi Nyima remains unknown. Concerns will linger on for as long as the Chinese government continues to arbitrarily detain and disappear Tibetan political prisoners, including Gedhun Choekyi Nyima, his parents and Chadrel Rinpoche.

Tibet has been under iron-fist control of China for over six decades now and generations of Tibetans have endured immense hardship at the hand of Chinese authorities. The Chinese government continues to be blatant in violating basic human rights and freedoms in Tibet. The repressive nature of the Chinese rule is best reflected by the series of self-immolations committed by ordinary Tibetans in the recent years, the enforced disappearance case of the 11th Panchen Lama, and the systematic human rights violations including religious repression suffered by the ordinary Tibetan population in Tibet on a daily basis. 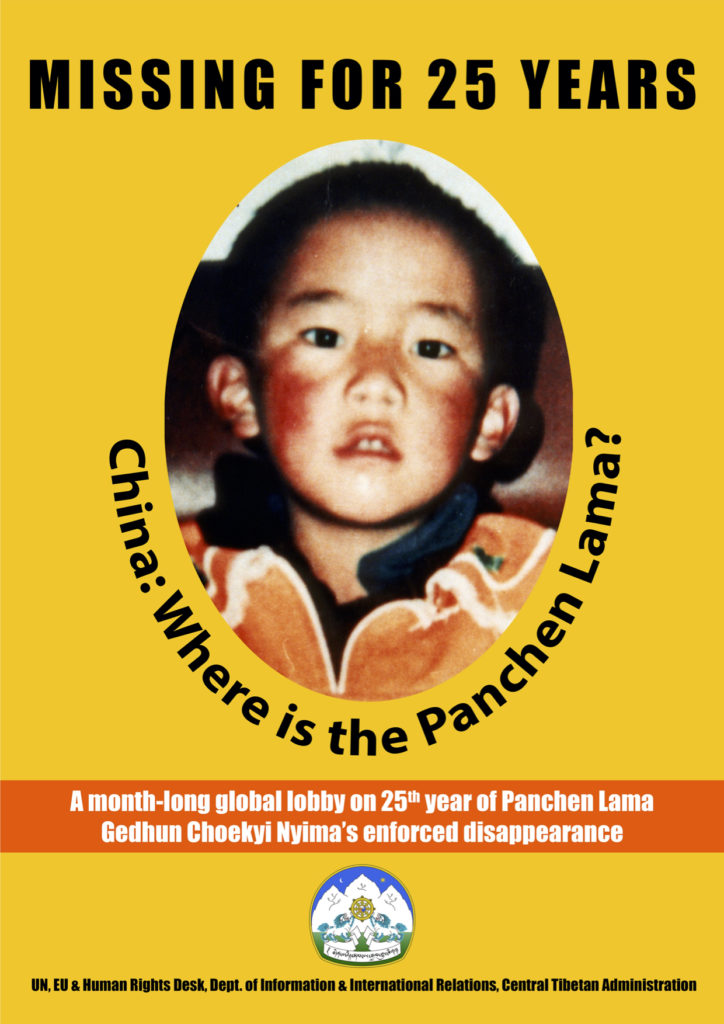