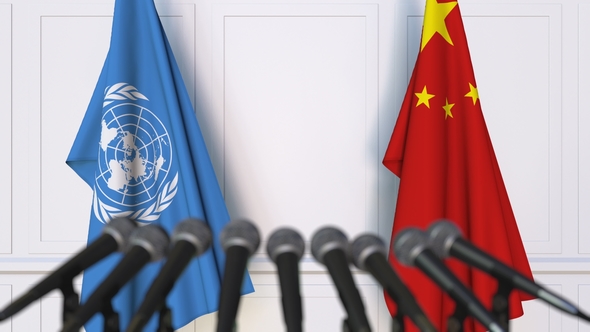 Flags of the United Nations and China at international meeting or negotiations press conference. Photo/VideoHive

United Nations, Jun 30 (PTI) Describing China’s human rights record as “deplorable”, the US on Tuesday said Beijing’s efforts to disguise it must be countered with more transparency, discussion and truth, as Washington applauded several UN human rights independent experts for “courageously” expressing concern over Chinese moves against the people of Hong Kong, minorities in Xinjiang and Tibet.

“The world has known about the Chinese Communist Party’s gross and systematic abuses of human rights for decades, but too often turned a blind eye. I salute the United Nations special rapporteurs and human rights experts for courageously breaking this silence and standing up for the Chinese people,” US Permanent Representative to UN Ambassador Kelly Craft said in a statement.

Craft was referring to the June 26 statement issued by a number of UN human rights independent experts and rapporteurs in which they had raised concerns over a “range of issues of grave concern”, from the collective repression of the population, especially religious and ethnic minorities, in Xinjiang and Tibet.

They also raided concerns to the detention of lawyers and prosecution and disappearances of human rights defenders across the country, allegations of forced labour in various sectors of the formal and the informal economy, as well as arbitrary interferences with the right to privacy, to cybersecurity laws that authorise censorship and the broadly worrying anti-terrorism and sedition laws applicable in Hong Kong.

The People’s Republic of China’s “human rights record is deplorable, and its efforts to disguise that record must be countered with more transparency, more discussion, and more truth, as the UN’s founders envisioned,” she said adding that the Trump administration will “continue to lead those efforts, and will take every opportunity to give voice to those in Xinjiang, Tibet, Hong Kong, and elsewhere who are prevented from using theirs.”

Craft said the experts revealed the true state of human rights in China and their statement outlined the Chinese Communist Party’s “systematic repression of religious and ethnic minorities, the disappearance and detention of lawyers and human rights defenders, and the regime’s use of forced labour.”

Craft urged all her counterparts at the United Nations and in international organisations around the world to take note of the statement.

The independent experts urged China to “invite mandate-holders”, including those with a mandate to monitor civil and political rights, to conduct independent missions and to permit those visits to take place in an environment of confidentiality, respect for human rights defenders, and full avoidance of reprisals against those with whom mandate-holders may meet.

They had further urged the UN Human Rights Council (HRC) to act “with a sense of urgency” to take all appropriate measures to monitor Chinese human rights practices.

They said these measures could possibly include a special session to evaluate the range of violations indicated in this statement and generally, the establishment of an impartial and independent United Nations mechanism – such as a United Nations Special Rapporteur, a Panel of Experts appointed by the HRC, or a Secretary General Special Envoy – to closely monitor, analyse and report annually on the human rights situation in China, particularly, in view of the urgency of the situations in Hong Kong, Xinjiang and Tibet.

They said all member states and UN agencies in their dialogues and exchanges with China could specifically demand that China fulfills its human rights obligations, including with respect to the issues the experts noted.