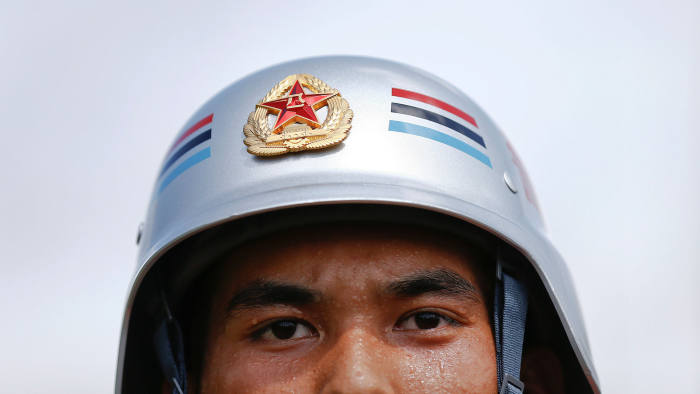 A soldier from the Chinese army’s Hong Kong garrison in 2017. China’s unbending response to the recent protests has only reduced Beijing’s popularity © Damir Sagolj/Reuters

There was a time when Beijing knew how to make concessions in its own interest. It made many to the US to gain accession to the World Trade Organization in 2001, enabling economic take-off. In the same decade it showed flexibility towards Hong Kong and Taiwan because, as former premier Zhu Rongji said, concessions to fellow Chinese are concessions to the Chinese nation.

But the art of conceding to reap benefits now seems lost. In its place an unbending, autocratic regime led by Xi Jinping, the strongman leader of the Communist party, has grown up. This authoritarian lurch may suit Beijing at home but it is bedevilling China’s relationship with much of the outside world, not only in Washington but also in European and Asian capitals.

The issue highlights a paradox. The international acceptance towards Beijing that underpinned its rise during the “reform and opening” era that began 40 years ago this month is now in retreat, imperilling the ecosystem that allowed China to prosper.

Hong Kong shows the dynamics of the backlash. Six months of mass protests were inspired in part by opposition to Beijing’s increasingly authoritarian bearing. But the unbending response of the Beijing-backed Hong Kong government has only further reduced its popularity; the pro-Beijing camp suffered an overwhelming defeat in district elections in November.

Similar trends are visible in Taiwan. Not only is President Tsai Ing-wen, whose ruling Democratic Progressive party advocates formal independence from mainland China, the frontrunner for next month’s presidential election. She is also using popular antipathy against Beijing’s heavy-handedness as a key part of her campaign platform.

Ms Tsai points to Hong Kong to try to convince her electorate that “one country, two systems” — the formula under which Hong Kong was allowed to maintain a “high degree of autonomy” after its return to mainland rule in 1997 — would never work for Taiwan. Beijing, however, insists on applying the formula to Taiwan in the event of any future unification.

So much for relations in China’s own backyard. The hardline posture of Mr Xi’s administration is also having a palpable impact on the wider world.

In truth, this year has been an annus horribilis for Chinese soft power; the imprisonment without trial of two Canadians in Beijing, the repression of Uighur minority people in mass incarceration camps, public spats against Arsenal footballer Mesut Özil and basketball’s Houston Rockets manager Daryl Morey, and several other issues have all besmirched China’s image.

It is unclear, however, that Beijing cares greatly about the diplomatic headwinds it has helped to create for itself. Perhaps the concentration of power around Mr Xi is such that nuance is being lost from the Communist party’s internal debates. Or perhaps the US-China trade war and rivalry has created a bunker mentality that does not allow for concessions.

More likely is another interpretation: that this is now the way that China wants to be. A government white paper published in time for national day celebrations in October was crystal clear in its convictions about the superiority of China’s “centralised, unified and firm leadership”.

So proud of this is Beijing that it now wants to export its development model. In one example, officials held a forum in November called “The Significance of China’s Social Governance to the World”, attended by 200 experts from 20 countries. Xinhua, the official news agency, praised the conference as providing “wisdom to a world that is in need of new governance models”.

As Elizabeth Economy noted for the US Council on Foreign Relations this month, China has been training officials from neighbours on how to suppress dissent and attract foreign investment, while accessing and retaining foreign technologies and skills.

If this view persists, it will fall upon the rest of the world to decide to what extent an authoritarian, at times draconian, China can and should be engaged. It will force uncomfortable reviews that seek to balance commercial imperatives against cherished national values such as freedom of speech and human rights.

China should realise that public perceptions can be crucial to future policy in democratic countries. If it persists in trying to get its way through browbeating others, it may end up achieving the very opposite of its aims.