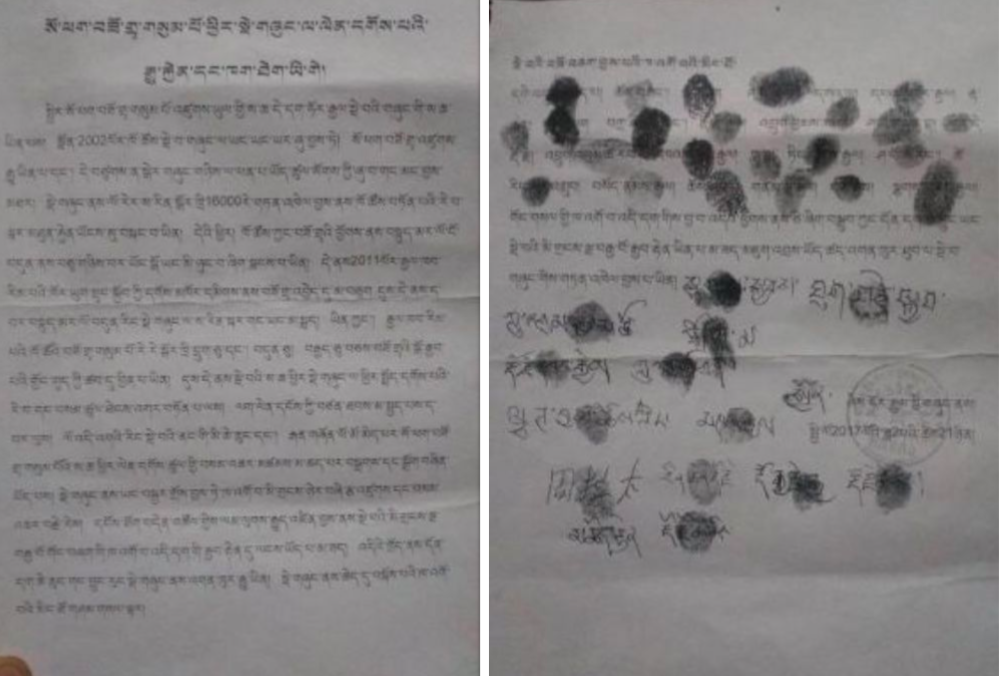 A copy of the petition as published on TCHRD website.

Dharamshala: A Chinese court has sentenced nine Tibetans for creating an informal organization urging authorities to return community land taken by authorities in Rebgong County, Malho (Chinese: Huangnan) Tibetan Autonomous Prefecture, in the traditional province of Amdo. They were sentenced around mid-April for three to seven years.

The nine Tibetans, identified by the Tibetan Centre for Human Rights and Democracy, are Gendun Soepa, Choesang, Bhende Dorje, Tashi Tsering, Sonam Gyal, Dhargye, Shawo Tsering Khajan Gyal, and Dukbum Tsering. They were convicted for starting an informal organization which the Rebgong County Court held “illegal” and for engaging in “forced business transaction”, “extortion and deceit” and for “disturb[ing] social order by mobilising support from the public”.

The court accused the nine Tibetans of having “maliciously obstructed the government’s land acquisition work and normal construction operations, committed serious crimes that constitute a crime of gathering people to disturb social order,” reported the Centre on its website.

The nine Tibetans, all residents of Horgyal village in Rebgong, Malho were detained in July 2018 and formally arrested about a month later in August for running a campaign “to reclaim community land expropriated by local government for a failed business enterprise” – where three brick factories were run in exchange for lease payments to the village that ended in 2011 after the government closed the factories. However, TCHRD noted that their arrests were reported by Chinese state media only in November 2018. The authorities reportedly compensated the factories annually for the loss of business but the payments to the village stopped, which then led to the villagers’ call for the return of their land, stated TCHRD.

TCHRD has also released images of a petition dated 21 February 2017, with 24 signatories complaining the overdue compensation for seven years which was endorsed and supported by the Village Committee.