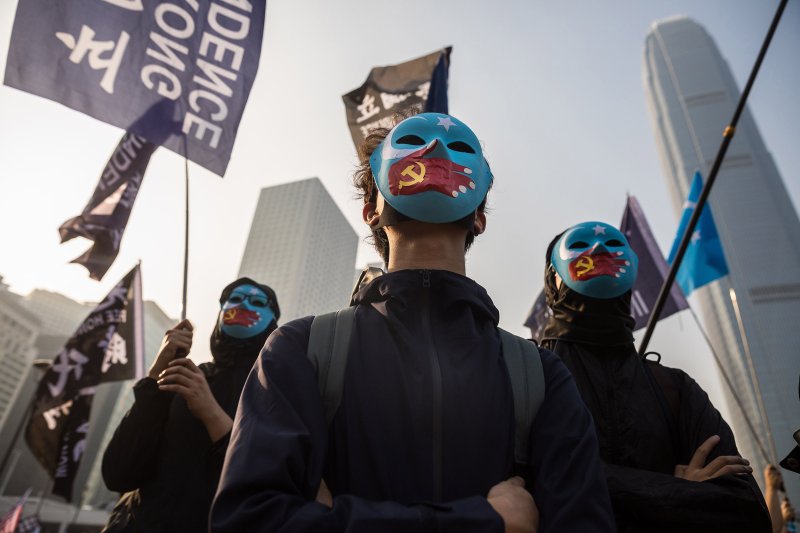 Protesters attend a rally in Hong Kong on December 22, 2019 to show support for the Uighur minority in China. – ong Kong riot police broke up a rally in solidarity with China’s Uighurs on December 22 as the city’s pro-democracy movement likened their plight to that of the oppressed Muslim minority. (Photo by DALE DE LA REY/AFP via Getty Images)

China poses an “existential threat” to the international human rights system, according to a new report released today by Human Rights Watch (HRW) after the organization’s executive director was denied entry to Hong Kong at the weekend. “It’s not simply a suppression at home, but it’s attacks on virtually any body, company, government, international institution that tries to uphold human rights or hold Beijing to account,” HRW’s executive director Kenneth Roth told TIME ahead of the report’s release.

That’s the message Roth intended to highlight in Hong Kong on Wednesday, where World Report 2020, HRW’s annual survey of the global state of human rights, was originally due to be launched in Hong Kong. “I had hoped to hold this press conference in Hong Kong but the Chinese authorities had a different idea and they blocked me at the airport,” Roth said during a press conference held instead in New York. “This is the first time I have been blocked entering Hong Kong.”

Roth said he had been in Hong Kong to release a report on gender discrimination in the Chinese job market less than two years ago. He said he believes this year was different because the Chinese government “made the preposterous claim that Human Rights Watch is inciting the Hong Kong pro-democracy protests.”

However, Hong Kong authorities denied Roth, who is a U.S. citizen, from entering the city on Sunday; the following day, China’s Foreign Ministry defended the decision. Roth tells TIME that upon arrival at Hong Kong International Airport, he was immediately stopped by immigration agents and held in a room for around two hours by three agents.

“It was clear the decision was being made someplace else, and then it became clear that it was in Beijing,” says Roth, who has entered Hong Kong on past occasions. When told that he would be denied entry, Roth asked for justification. “The only thing they would say was that it was for ‘immigration reasons’.”

“The Chinese government is terrified of admitting this genuine desire for democracy on territory that they rule,” said Roth during the press conference. He said that China is concerned “what’s happening in Hong Kong might spread to the mainland.” “That’s really the big fear.”

China’s detention of a million members of the Uighur ethnic minority group in Xinjiang province, and an “unprecedented regime of mass surveillance” designed to suppress criticism are among the human rights violations described in the mainland, while the report also Beijing’s intensifying attempts to undermine international human rights standards and institutions on a global scale.

The effective barring of Roth from entering Hong Kong is not an isolated incident, happening days after a U.S. photographer covering the pro-democracy protests was also banned from entering the financial hub. “I think it’s worth stressing that what happened to me pales in comparison to what is happening to the pro-democracy protesters on the streets of Hong Kong. They’re the ones who are facing tear gas, beatings and arrest, and I just had another 16 hour flight [back to New York],” Roth says. “But what it does reflect is a real worsening of the human rights situation in Hong Kong.”

The semi-autonomous territory has been rocked by pro-democracy protests since June 2019, triggered by a controversial extradition bill that has since been withdrawn. Over the past seven months, the city has been rocked by escalating force; as of early December, official figures stated since the protests began more than 6,000 protesters have been arrested, and police have fired around 16,000 rounds of tear gas and 10,000 rubber bullets.

At a press briefing on Monday after the incident involving Roth, a Chinese foreign ministry spokesman said that “allowing or not allowing someone’s entry is China’s sovereign right,” adding that foreign NGOs were supporting “Hong Kong independence separatist activities.”

“The justification they put forward was laughable, and insulting to the people of Hong Kong,” says Roth. “They don’t need me to tell them to take to the streets — they are looking to defend their own human rights, their own political freedoms and their own rule of law.” In December, China announced that it would impose sanctions on several U.S.-based NGOs, including HRW, in retaliation for legislation aimed at protecting human rights in Hong Kong. Roth says Beijing’s explanation for barring him shows how fearful the authorities are of demonstrations in the city, and is an attempt to persuade those in the mainland not to emulate the pro-democracy protests. “They simply cannot admit to people on the mainland that hundreds of thousands Chinese citizens would take to the street in opposition to the increasingly dictatorial rule that is coming from Beijing.”

The incident, as well as the broader obstacles to HRW’s work in China and Hong Kong, “is part of a trend in which the Chinese government is trying to impede efforts to defend core human rights principles,” says Roth. The Chinese government has attempted to deter, track and deport journalists and foreign investigators from reporting on forced indoctrination and detention of at least a million Uighur Muslims in internment camps in China’s western province of Xinjiang, highlighted in Roth’s lead essay in the HRW report. On Monday, Chinese state media reported that the semi-autonomous region of Tibet would introduce forthcoming regulations to “strengthen ethnic unity;” echoing language used in regulations introduced in Xinjiang four years ago. 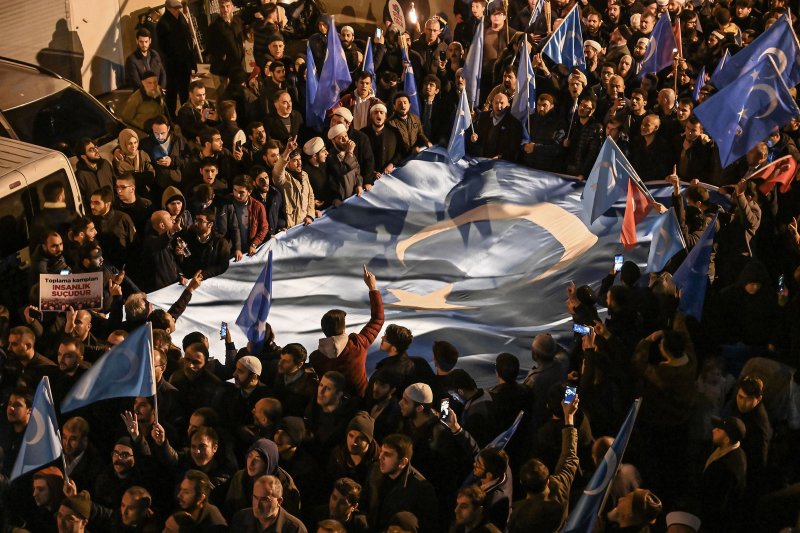 Supporters of China’s Muslim Uighur minority march with flags of East Turkestan during a demonstration in Istanbul on Dec. 20, 2019.

Beyond the worrying crackdown within China’s own borders, HRW’s report highlights Beijing’s efforts to deter the international community from scrutinizing its human rights abuses, taking “full advantage of the corporate quest for profit to extend its censorship to critics abroad.” In the world of sports, high-profile figures including Arsenal soccer player Mesut Ozil, New Zealand rugby player Sonny Bill Williams, and Houston Rockets basketball team manager Daryl Morey have all faced backlash from Beijing in recent months after voicing concerns over the human rights situations in Xinjiang and Hong Kong. International companies including McDonald’s, Marriott and GAP have all offered profuse apologies to China after “offending” the country by not portraying Taiwan and Tibet as part of the mainland. And at the individual level, the export of censorship is reaching dissidents and even universities in Australia, Canada, the U.K. and the U.S.; the report notes that students from China who wanted to join campus debates felt unable to do so for fear of being monitored or reported to Chinese authorities.

The export of the Chinese censorship system also permeates governments and international institutions, and has “transformed into an active assault on the international human rights system,” according to Roth. The report argues that Beijing’s pressure has been felt “all the way to the top” of the U.N., leading to Secretary-General Antonio Guterres failing to publicly demand an end to the detention of Uighurs. China has also consistently worked with Russia at the U.N. Security Council to block efforts to investigate human rights abuses in Syria, Myanmar and Venezuela. “China worries that even enforcement of human rights standards someplace else will have a boomerang effect that will come back to haunt it,” says Roth.

Aside from China, the report also looks at several other concerning situations around around the world, including civilians at risk from indiscriminate bombing in Idlib province in Syria, the desperate humanitarian crisis resulting from Saudi-led coalition’s actions in Yemen, the refugee crisis emerging from Maduro’s grip on power in Venezuela, and Myanmar’s denial of the genocide of the Rohingya at the International Court of Justice. And while Roth is encouraged by a growing international response to China’s actions in Xinjiang, particularly from Muslim majority nations, there remains much more to be done. From a U.S. perspective, the report notes that strong rhetoric from officials condemning human rights violations in China is “often undercut by Trump’s praise of Xi Jinping and other friendly autocrats,” as well as the Trump-administration’s own policies in violation of human rights, including forced separation at the U.S.-Mexican border.