China has no historical, religious and political rights to interfere in Dalai Lama’s reincarnation issues 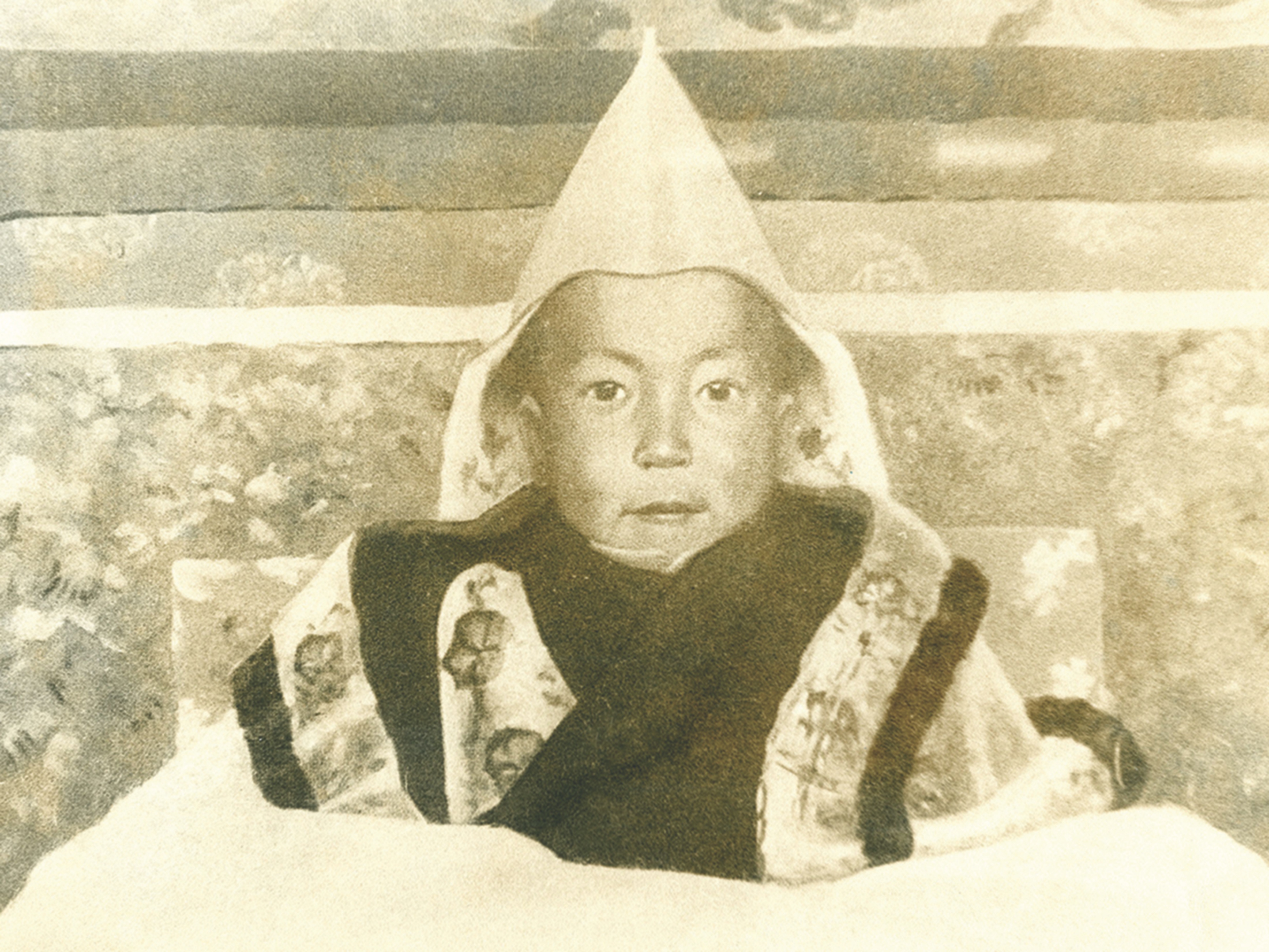 His Holiness the 14th Dalai Lama at his enthronement ceremony, February 22, 1940, in Lhasa, Tibet. Photo courtesy of Tibet Museum

Oblivious to the international uproar over the growing repression in Tibet and Uighur region, and Hong Kong unrest, China invited journalists from India this month and condescendingly warned India on the Dalai Lama and Arunachal Pradesh issues. They explicitly conveyed in no less intimidating terms that China will select the 15th Dalai Lama within the country and any interference by India on the issue will not be tolerated!

The inspiration behind the move seems to be from the two dictums in the Sun Tzu’s Art of War tactics. The first, “The further you penetrate into a (enemy’s) country, the greater will be the solidarity of your troops, thus the defenders will not prevail against you.” The second, “Reduce the hostile chiefs by inflicting damage on them; make trouble for them, and keep them constantly engaged; hold specious allurements, and make them rush to any given point.”

The Chinese officials pointed out two things as important historical criteria for the selection of the Dalai Lama’s reincarnation. First, the selection should be within China based on the 200-year old historical process. Second, it should have the approval of the Chinese Central government. Wang and Xiao further went on to explain that the incumbent 14th Dalai Lama is Dalai Lama because of the Chinese Central government’s recognition.

With due respect to the three learned Chinese officials, we beg to differ, because the fact is otherwise. This is a blatant deliberate attempt by the Chinese leadership to distort historical and religious fact.

When they said “200-year old historical process”, it should be around 1819 AD during the reign of the Qing emperor Jiaqing [r.1796-1820]. However, the history and Institution of the Dalai Lama dates back to more than 500-year, when the first Dalai Lama was born in 1391. It existed much before the emergence of the Qing dynasty [1644-1911] in China. Therefore, the purported indirect assertion that the Qing emperor’s decree governed the reincarnation of the Dalai Lamas is unfounded and baseless. Now, let us have a glimpse of the history of the Dalai Lamas’ reincarnation.

In 1792, during the reign of Manchu emperor Qianglong [r.1736-1795], Tibet requested Manchu’s help to fight the invading Gurkha force. As this was the fourth time the Tibetans asked for the Manchu’s help, the Manchu officials suggested 29-point regulation for the effective administration of Tibet. This was based on the Priest-patron relationship; it has no ruler-subject context. One of the points was to use the Golden Urn method to select reincarnation of Dalai lamas and Panchen Lamas. But except for the selection of the 11th Dalai Lama, this method was never used. For the 10th Dalai Lama, Tsultrim Gyatso, the selection was already done, but to humor the Machus, it was announced that the Golden Urn was used. For the 12th Dalai Lama also, Golden Urn was used as a formality only, as the selection was already confirmed as per Tibetan religious tradition.

Therefore, the three Chinese government officials’ statement emphasizing the method of Golden Urn and approval of Chinese central government as mandatory criteria for the recognition of reincarnation of the Dalai Lama is not true and baseless. It is an aggressive and ignominious attempt on the part of the Chinese leadership to distort the ancient religious tradition of Tibet to serve its current political agenda.

To make the historical record straight, it was the Manchu Qing dynasty with whom the Tibetans had been dealing with, China was only a part of the dynasty at that time. If China’s claim on Tibet is based on the Manchu’s relationship with the Tibetans, then Mongols have a better reason to make claim over Tibet.

Sun Yatsen, the father of Chinese republic has stated that the Chinese nation had fallen twice under foreign rule: the first time under the Mongol Yuan dynasty [1271-1368] and the second time under the Manchu Qing dynasty [1644-1911]. So, where is China? What central government are Wang and Xiao talking about? The People’s Republic of China of Communist China came only in October 1949.

His Holiness the Dalai Lama has on numerous occasions explained his stance clearly on the reincarnation. Here is what he has said in September 2011, it is on the official website:

“As I mentioned earlier, reincarnation is a phenomenon which should take place either through the voluntary choice of the concerned person or at least on the strength of his or her karma, merit and prayers. Therefore, the person who reincarnates has sole legitimate authority over where and how he or she takes rebirth and how that reincarnation is to be recognized. It is a reality that no one else can force the person concerned, or manipulate him or her. It is particularly inappropriate for Chinese communists, who explicitly reject even the idea of past and future lives, let alone the concept of reincarnate Tulkus, to meddle in the system of reincarnation and especially the reincarnations of the Dalai Lamas and Panchen Lamas. Such brazen meddling contradicts their own political ideology and reveals their double standards. Should this situation continue in the future, it will be impossible for Tibetans and those who follow the Tibetan Buddhist tradition to acknowledge or accept it.

When I am about ninety I will consult the high Lamas of the Tibetan Buddhist traditions, the Tibetan public, and other concerned people who follow Tibetan Buddhism, and re-evaluate whether the institution of the Dalai Lama should continue or not. On that basis we will take a decision. If it is decided that the reincarnation of the Dalai Lama should continue and there is a need for the Fifteenth Dalai Lama to be recognized, responsibility for doing so will primarily rest on the concerned officers of the Dalai Lama’s Gaden Phodrang Trust. They should consult the various heads of the Tibetan Buddhist traditions and the reliable oath-bound Dharma Protectors who are linked inseparably to the lineage of the Dalai Lamas. They should seek advice and direction from these concerned beings and carry out the procedures of search and recognition in accordance with past tradition. I shall leave clear written instructions about this. Bear in mind that, apart from the reincarnation recognized through such legitimate methods, no recognition or acceptance should be given to a candidate chosen for political ends by anyone, including those in the People’s Republic of China.”

While the international community respects His Holiness the Dalai Lama as a great spiritual master and accorded Nobel Peace Prize for his contribution in promoting peace and non-violence, the Chinese leadership has condemned him as a devil, a terrorist, a separatist, and a wolf in a sheep’s skin. The important question here is: then why are they so desperate to have the devil, terrorist, separatist and the wolf to be reborn?

The concept of reincarnation is based on the Buddhist and Hindu belief of existence of past and future lives. Chinese communist leadership should first learn and accept the existence of past and future lives before meddling in the reincarnation of Tibetan lamas. China’s State Religious Affairs Bureau Order No. 5 should be withdrawn. Buddhists and devotees around the world including those in China will not tolerate this communist blasphemy!

Therefore, the leaders of the free world and the advocates of freedom, justice and democracy around the globe should uphold the words of His Holiness the Dalai Lama as final in his reincarnation issue, and collectively urge the Chinese leadership to refrain from any act of sacrilege against the highest order of Tibetan Buddhism. The fact is that communist China has no historical, religious and political rights to select the Dalai Lamas.

*Tsewang Gyalpo Arya is the Information Secretary of Department of Information and International Relations (DIIR), Central Tibetan Administration. Views expressed above are the author’s own.