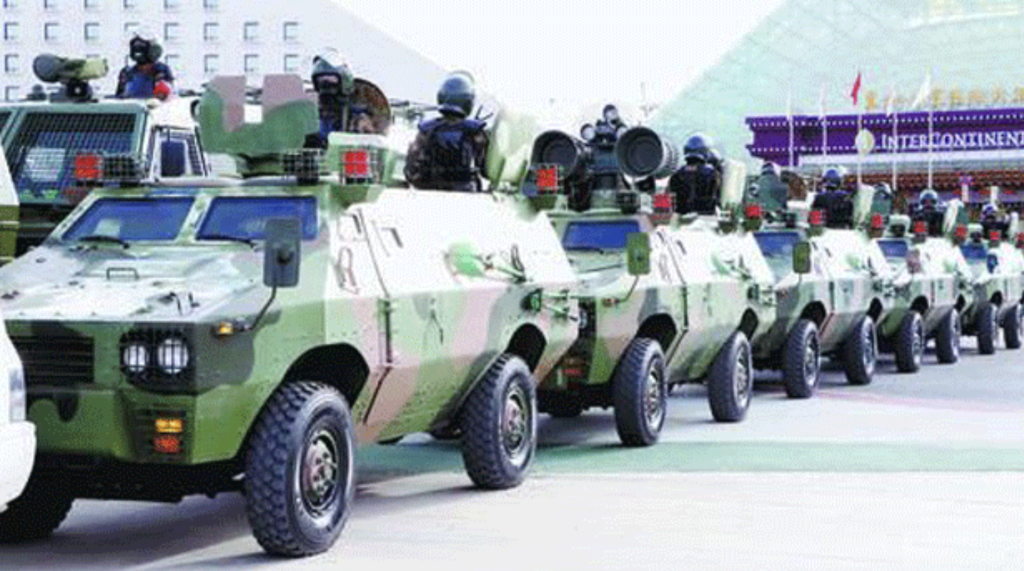 A military drill held on March 6 in Tibet’s regional capital Lhasa to demonstrate China’s control of the formerly independent country has instead revealed Beijing’s anxieties over the stability of its rule, observers say.

The large show of force, including what state media called “combat-ready” troops, firefighters, and People’s Armed Police, came in the run-up to the politically sensitive March 10 anniversary of a 1959 Tibetan uprising against Chinese rule.

Earlier in the week, state media said, the Communist Party Secretary of the Tibet Autonomous Region (TAR), security officials, and representatives of the TAR Stability Leadership Committee met to criticize what they called the “reactionary activities” of exiled Tibetan spiritual leader the Dalai Lama and his supporters.

Lower-ranking officials were meanwhile warned at the March 1 meeting to be vigilant in eliminating threats to the “stability and security” of the TAR, with anyone deemed to be failing in their duties threatened with disciplinary action, according to a March 2 report in the official newspaper Tibet Daily.

The language used at the meeting and the later show of military force in Tibet’s capital reflects deep worry over the stability of Beijing’s rule in the region, which China annexed by force over 70 years ago, Tibetan observers told RFA’s Tibetan Service this week.

“The month of March has always been a huge concern to the Chinese government because it’s National Uprising Month for the Tibetans, which prompts huge security measures, especially inside Tibet,” Australia-based Tibet analyst Bawa Kalsang Gyaltsen said.

“On the one hand, the Chinese Communist Party says that Tibetans in Tibet live freely and comfortably, but in reality, Tibetans are constantly living under scrutiny and threat from the Chinese government,” Gyaltsen said.

Also speaking to RFA, Jampel Monlam—former director of the Dharamsala, India-based Tibetan Centre for Human Rights and Democracy—said that in spite of curfews and restrictions in place because of the spread of coronavirus, “Tibetans’ determination and resistance have become a threat to the Chinese government.”

“This is why they have been sending Chinese ‘working groups’ into Tibetan monasteries and even regular households in the villages ahead of Uprising Day,” Monlam said.

A month of anniversaries

China regularly tightens security in Tibet’s regional capital Lhasa and in other Tibetan areas of China during important political gatherings in Beijing and in March, a month of politically sensitive anniversaries.

On March 10, 1959, Tibetans in Lhasa rose up in protest of Beijing’s tightening political and military control of the formerly independent Tibet, sparking a rebellion in which thousands were killed.

And on March 14, 2008, a riot in Lhasa followed the suppression by the Chinese police of four days of peaceful Tibetan protests and led to the destruction of Han Chinese shops in the city and deadly attacks on Han Chinese residents.

The riot then sparked a wave of mostly peaceful protests against Chinese rule that spread across Tibet and into Tibetan-populated regions of western Chinese provinces.

Hundreds of Tibetans were detained, beaten, or shot as Chinese security forces quelled the protests, sources said in earlier reports.

Meanwhile, the Tibetan Welfare Office in Nepal has urged Tibetan residents of the Himalayan country not to celebrate the March 10 anniversary of the 1959 Tibetan uprising against Chinese rule, saying Tibetans must follow local laws to avoid a crackdown by police.

Nepal cites its growing economic ties with Beijing, with promises of millions of dollars of Chinese investment in Nepalese development projects, in cracking down on Tibetan activities in the country, including elections in the refugee community and birthday celebrations for the Dalai Lama.