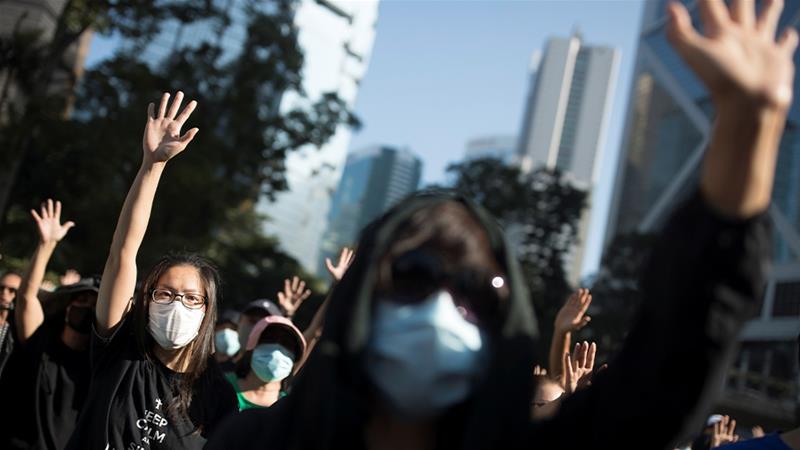 China has accused the United Nations High Commissioner for Human Rights of emboldening “radical violence” in Hong Kong by suggesting the city’s leader conduct an investigation into reports of excessive use of force by police.

The UN’s human rights chief, Michelle Bachelet, wrote in an opinion piece that was published on Saturday in the local South China Morning Post that Hong Kong leader Carrie Lam’s government should prioritise “meaningful, inclusive” dialogue to resolve the crisis.

Bachelet, who was twice president of Chile, urged Lam to hold an “independent and impartial judge-led investigation” into police conduct in their handling of the protests; one of the pro-democracy protests’ so-called five demands.

China’s UN mission in Geneva said Bachelet’s article interfered in the internal affairs of China and exerted pressure on the city’s government and police, which would “only embolden the rioters to conduct more severe radical violence.”

Hong Kong’s leaders have only one way out of the protest crisis – a broad, open and inclusive dialogue with the whole community

It said Bachelet had made “inappropriate comments” on the situation in Hong Kong and that the Chinese side had lodged a strong protest in response.

Since the unrest began, protesters have disrupted traffic, vandalised public facilities and pro-China shops, and hurled petrol bombs in pitched battles with riot police who have responded with volleys of tear gas and water cannons.

The occupation of several universities by protesters earlier this month after fiery clashes with police capped one of the most violent chapters in the turmoil, which has contributed to the city’s first recession in a decade.

While calling for the current calm to continue, Lam has refused to make any concessions to the protesters’ demands, which also include the introduction of full elections for her post and the legislature.

Hong Kong police have arrested 5,890 people as a result of the protests.

On Saturday, hundreds of silver-haired activists joined young protesters for a unity rally, promising that their movement would not fade away until there was greater democracy.

“The government is still stubborn. Every one of us, young and old, must contribute in our own way. The movement will not stop,” said a 63-year-old woman who identified herself as Mrs Tam.

Some protesters returned to the streets on Saturday night, blocking traffic in the Mong Kok area of Kowloon to mark three months since police stormed a train carriage in the area and hit passengers with batons and pepper spray.

More rallies are planned on Sunday, including an anti-tear gas protest and a “gratitude” march to the US Consulate after United States President Donald Trump earlier this week signed into law two bills on human rights in Hong Kong.