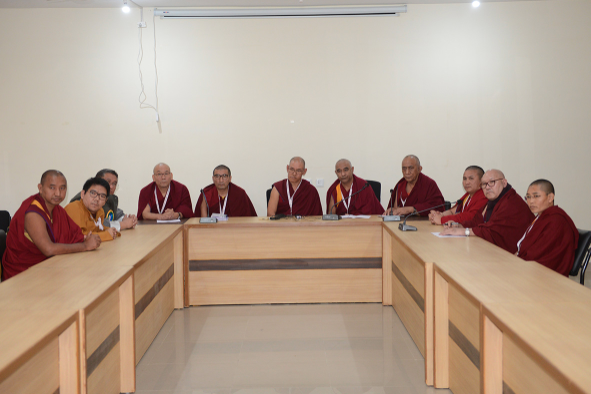 Buddhists of the Himalayan region during the sideline conference. Photo: Lobsang Wangyal/Tibet Sun

Dharamshala: Buddhists of the Himalayan region during a sideline conference voiced their favour to support the three-point resolutions passed by the 14th Religious conference held recently in Dharmashala.

The three-day conference administered by the heads and important figures of various traditions of Tibetan Buddhism and native Tibetan Bon tradition including those from the Himalayan region issued a joint declaration calling for the continuation of the lineages of His Holiness the Dalai Lama in the traditional manner that has been followed till now. They affirmed Dalai Lama’s sole authority in his succession while rejecting government’s meddling particularly the Government of the People’s Republic of China’s interference in appointing the protégé of His Holiness.

“The authority of decision concerning the way and the manner in which the next reincarnation of the XIV Dalai Lama should appear solely rests with His Holiness the XIV Dalai Lama himself. No government or otherwise will have such authority. If the Government of the People’s Republic of China for political ends chooses a candidate for the Dalai Lama, the Tibetan people will not recognize and respect that candidate” the resolution stated.

Defending their stand to support the decision of the declarations, Buddhist of the Himalayan region said, “We sincerely urge for the lineages of Dalai Lama to continue smoothly and in case of any interference by China, we strongly affirm to dismiss the Chinese appointed Dalai Lama”.

11 representatives from the Himalayan region including those from Ladakh, Nepal, Arunachal Pradesh, Himachal Pradesh participated in this sideline conference. Likewise, a culminating decision in regard to support and defend the resolutions adopted at the 14th Religious Conference was solidified by them.

The representatives also urged the Indian government to cooperate and support the Dharamshala declarations.