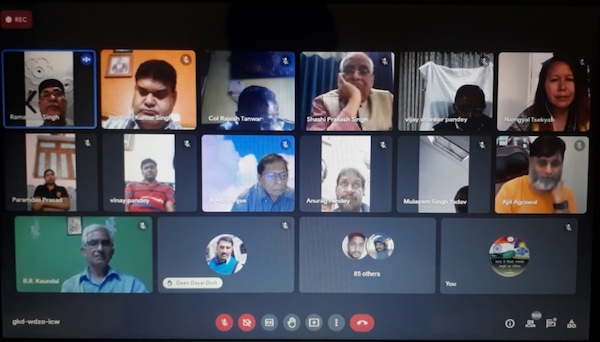 Justice (Retd) Sudhir Kumar Saxena addressing the Webinar said that Tibet was always an independent country, and it is only that China has forcefully occupied Tibet in 1949. He pointed out the critical situation inside Tibet under the Communist Chinese rule. He mentioned about human rights abuses in Tibet. He said that China is exploiting the resources of Tibet by unauthorised occupation of its resources. The Buddhist culture of Tibet has been attacked due to which we all the people of India are also feeling very hurt as Buddhism originated in India and the Indian people revered Lord Buddha and his teachings.

He further said that United Nations had considered the right of Tibet for self determination, but it had never taken serious steps on that due to fear of China. It is time to stand up and seek justice for Tibet at International forum with support from the whole world and India will lead it.

Shri Shashi Prakash Singh in his address said that China has oppressed the people of Tibet for small incidents and this atrocity is still continuing unabated. Hundreds of people fighting for Tibet’s freedom are still being subjected to heinous atrocities such as life imprisonment and the death penalty. We have to raise it prominently in the international forum. He said that only India can give a solution to this, India has the power that it can solve this Tibet’s issue together with the whole world.

Shri Ramashish ji in his remarks said that the violence committed by the Chinese Red Army in Ladakh can never be forgotten. India has always considered Tibet as its own. China is the enemy of spirituality not only of Buddhism but of the whole world. He said that today the need of the hour is that the people of India should stand with the justice of Tibet at every level and support them in their fight. However, he also called upon the Tibetans to take the lead in making a vocal revolution. This time, he described the tweet containing the congratulatory message of Prime Minister Modi on the birthday of Dalai Lama as a sign of India’s policy preparedness against China.

Mrs. Namgyal Tsekey addressing the webinar shared that Tibet, which is called the roof of the world has been seeking justice from the international community since 1959. Today China wants to dominate our culture, language, religious life and freedom everywhere. It is difficult to find any other example of human rights abuses being done in Tibet at present than anywhere else.

She further said that China is using all kinds of tactics to eliminate the Tibetan people. China is committing cultural genocide of Tibetan people which is worse than biological genocide. The most unfortunate thing is that there is no proper judicial system in the international justice system to address this cultural genocide. China’s actions are extremely dangerous for international peace and prosperity. China has also been abusing the veto power in the Security Council.

Shri B. R. Kaundal, an expert in Tibetan affairs said that India has always stood with Tibet in the struggle for justice. Tibet’s independence is important not only for Tibet, but also for India’s security. He said that the then Government of India’s help to China in getting the veto power in UN Security Council has become menace for us today. Tibet was promised a genuine autonomy but that promise has not been fulfilled till date. And we should go to the International Court of Justice to get this demand fulfilled.

Shri Kaundal said that China has waged a biological war against the whole world through Corona. And there is an atmosphere against China all over the world. India should take advantage of this opportunity and launch a campaign against China. The people of Tibet are not violent like Taliban but peace loving, so China has been misusing them till date. Had these Tibetans also been violent, they would probably have achieved independence by now.

Shri Ashwani Kumar Tripathi in his remarks while describing self-determination as the right of Tibetans, said that we will have to go to the International Court of justice for Tibet by becoming an ally in this struggle of the people of Tibet. He said that there is a huge deposit of mineral resources under the land of Tibet, due to which China wants to destroy the world economy through it. China will never be able to succeed in its ill-fated plan due to the atmosphere that is being created in the whole world including India.

The Webinar program saw a participation of 232 people from 140 different places across the country and including abroad. 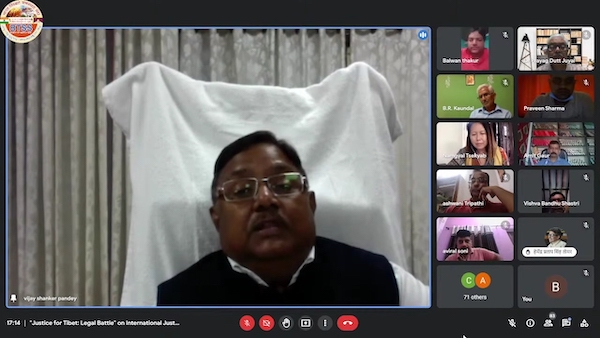 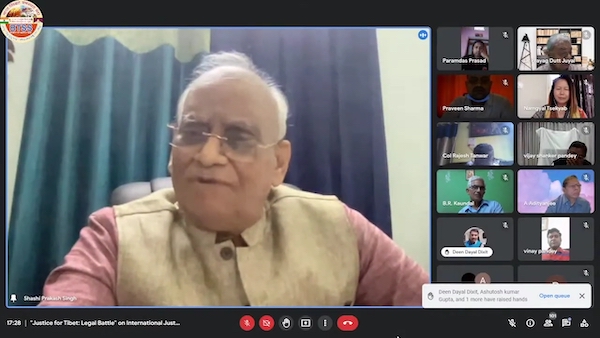 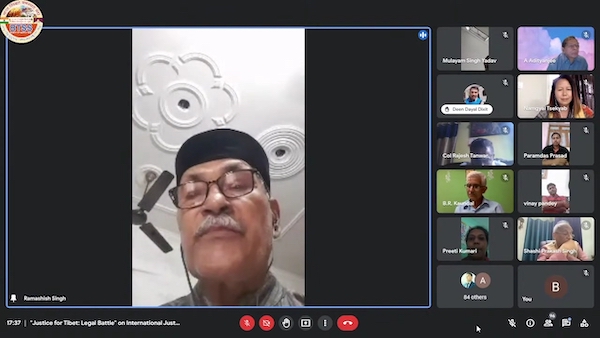 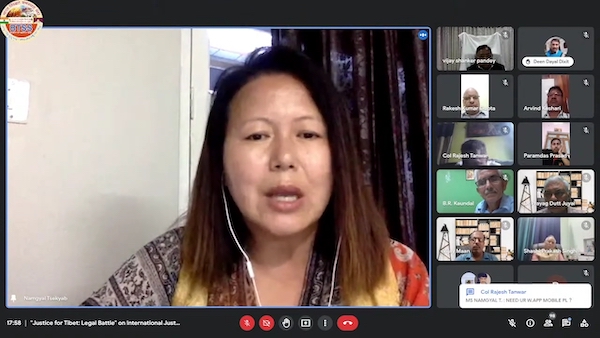 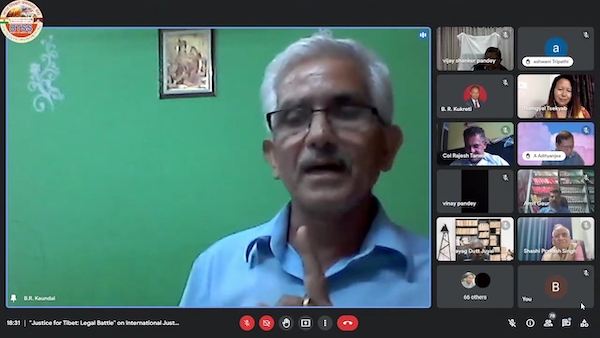 Shri B. R. Kaundal addressing during the Webinar 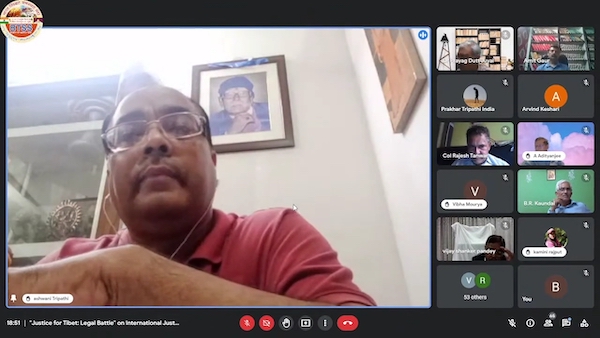 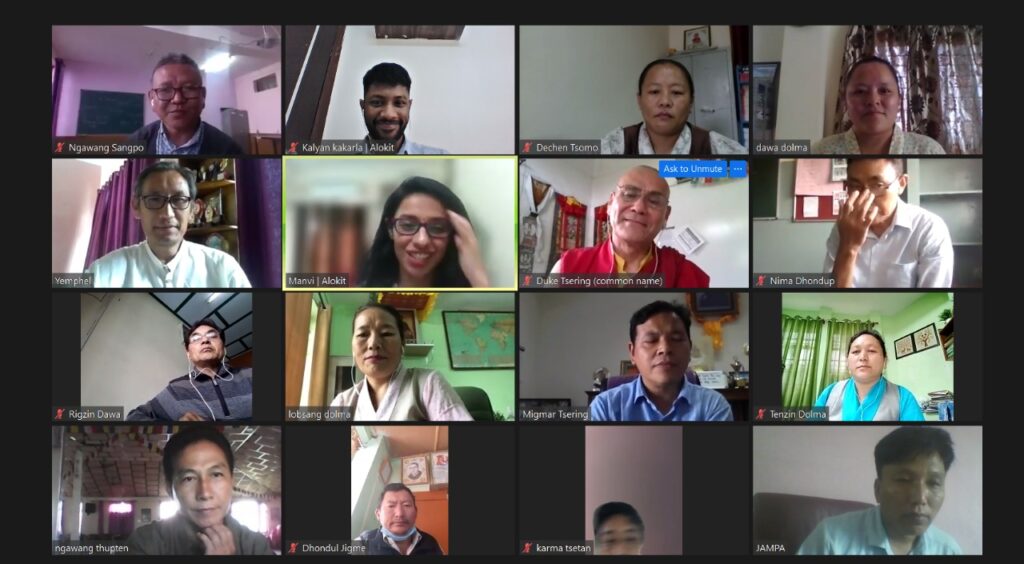