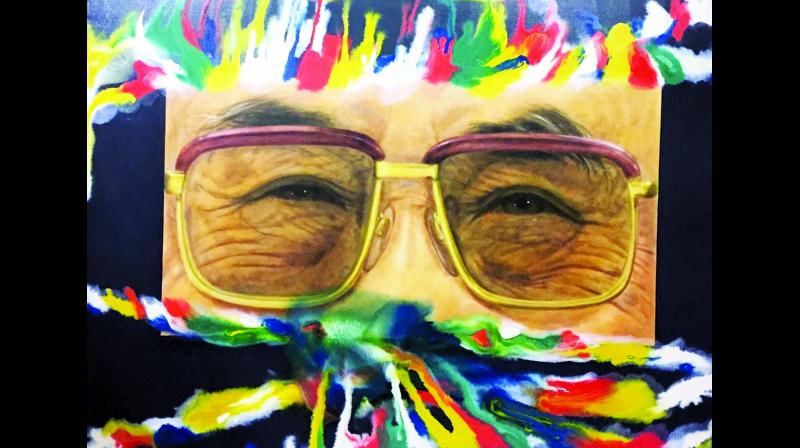 Spiritual, intricate, and alluring are among the words that define Thangka, a Tibetan Buddhist art form that portrays life-sized Buddhist deities, sages or mandals on cotton or silk cloth. Traditionally made with devotional subjects, these canvases play the crucial role of centerpieces in ceremonies with people offering prayers.

While it is not so commonly seen at art exhibitions, the religious art is making an appearance in the city today through artist Sudhir Katkar’s work. Titled Calm, the paintings are inspired by Tibetan culture, traditions, monasteries and monks, but with a modern spin. “I decided to make it different, with a monastery or religious symbols. This is my interpretation, my vision of God. I see God in human beings,” says the 60-year-old, who has been visiting and researching Himalayan monasteries for the last 10 years.

Unknown about the path, his quest led him to Mundgod village, a Tibetan Buddhist colony in Karnataka that has been around for over five decades. A regular since then, Katkar has spent his last four years soaking in their tradition and learning more about Thangka art.

“From 2016 to March this year, I made around 276 paintings from my travel to Mundgod. These are all my observations from the various monasteries,” he shares. Originally made with watercolours, Katkar’s work is oil on canvas, as no one wants to adorn their wall with watercolour paintings, reasons the artist.

“It is done on cloth or silk and they use only vegetable colours,” he explains, adding the people in monasteries work on one painting at a time. “There is symmetry in their work. If it started from a corner, the flow of the painting will move in the same direction. It is minute work. In one inch of space, there are 10 figures.” 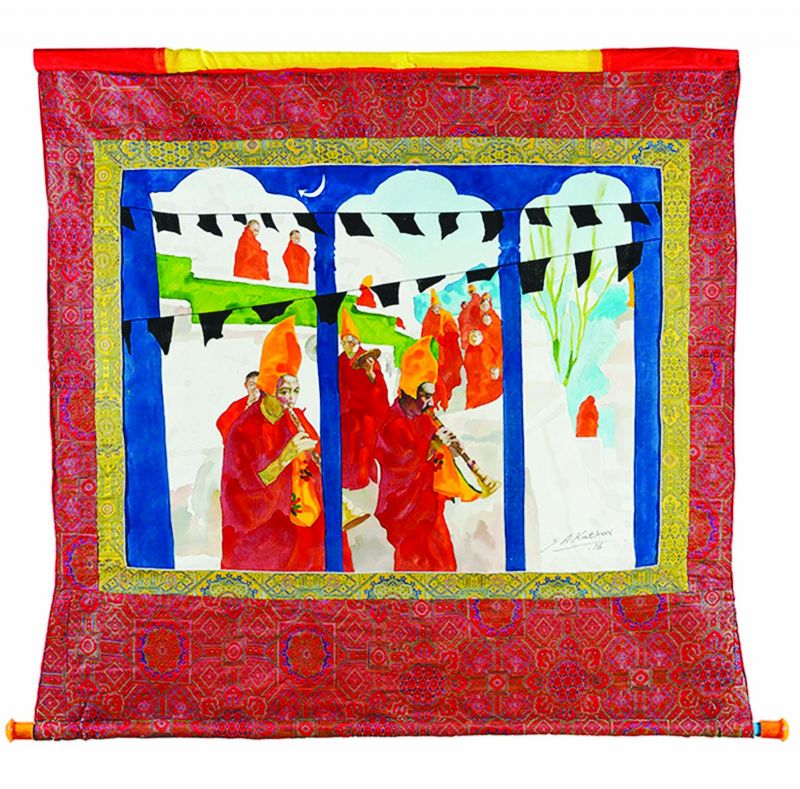 One of the attractions in his exhibition is a portrait of the Dalai Lama’s sparkling eyes created laced with vibrant hues. While the first look gives an impression of a photograph placed on a canvas, a deeper look will leave you with a smile. “It is a 4×5 feet canvas done with handwork. I started this piece in 2015 with a sketch and left it to attend a wedding. Then I met with an accident where my hand and fingers were crushed. It took me a year to regain mobility and finally finished in 2016. I didn’t want to put it for exhibition but was made to,” shares the artist, who has been painting from the age of 13.

However, the highlights of the exhibition are the two unique life-size 10×14 feet Thangka installations that are a compilation of more than 110 paintings each. Some of the paintings are also from the artists’ collection of the miniature pre-sketches. “When I finished my 276 paintings, I took a few of them to Mandgod looking for someone who could stitch my uneven canvases together to make for an 8×12 feet Thangka,” he recalls.

What seemed like an uphill task was made to look easy by a 72-year-old man who used to stitch the Dalai Lama’s mother’s clothes. “After I explained to him what I had in mind, he laid it out in the same manner. It took us three months to get those two huge canvas up and ready. He is the one who made and stitched the brocades on the outline of the canvas, that increased the size to 10×14,” shares Katkar.

Fascinated enough by the Buddhist to put them on canvas, the artist wanted to keep from hurting any sentiments. “After I made the paintings I showed it to them (Mundgod residents) to ensure that I am in no way hurting their feelings. They appreciated my work,” he concludes.
—From Today till November 18, At Jahangir Art Gallery, Kala Ghoda