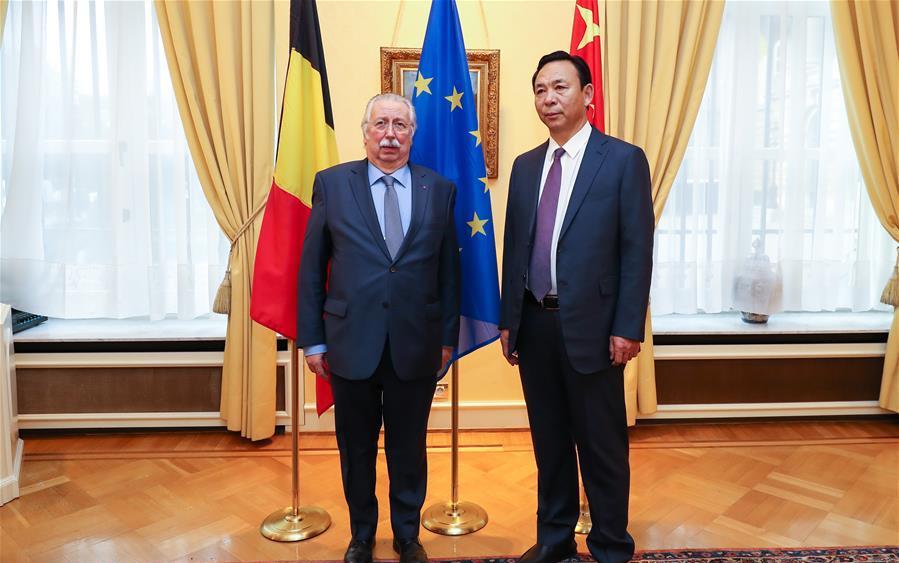 Norbu Dondrup or Luobudunzhu (R), member of the Tibet Autonomous Regional People’s Congress and vice chairman of the regional government with Vice President of the Chamber of Representatives of Belgium Andre Flahaut in Brussels, Belgium, 12 December 2019. Photo courtesy of Xinhua

Hardly one month after the visit of a four-member delegation of the Tibetan Parliament-in-Exile (TPiE) to Belgium, Chinese government felt the urge to send an “NPC Tibetan” delegation that was three times bigger than ours to the same country.

Xinhua, the official mouthpiece of China’s ruling Communist Party, reported that the NPC delegation held discussion and exchanged ideas with the Belgian lawmakers. However, the reality appears to be different. Unsurprisingly, the meeting seems to have been more a monologue than an exchange!

During the meeting, Norbu Dondrup or Luobudunzhu, the head of the delegation and member of TAR People’s Congress and Vice-Chairman of the regional government, seems to have boasted about the benefits of communism in Tibet citing detailed figures. He further seems to have claimed, “At present, Tibet is experiencing an unprecedented good time in history”. However, in reality, they have turned Tibet into an open-air prison and Tibetans their prisoner.

Tibet today is virtually locked down and is in a state of undeclared martial law. Foreign journalists, diplomats and human rights investigators are banned and the number of Tibetans escaping to India has been cut to a trickle. According to Reporters without Border, North Korea is more accessible to foreign journalists than Tibet.

The Chinese government has blanketed the region with security mechanisms and personnel. This includes stationing Chinese government cadres in villages and sensitive spots such as monasteries and dividing cities into grids in which residents have to spy on each other.

More than 154 Tibetans from all walks of life and ages have self-immolated to protest against the ongoing repressive policies of the Chinese government. If everything is well in Tibet and the Tibetans are happy as claimed by the Chinese government then why would our people resort to such drastic and agonizing form of protest? But the accumulation of six decades of ever-increasing repressive policies introduced by the Chinese government in Tibet aimed at eradicating the Tibetan National identity, ever-increasing marginalization of the Tibetans politically, socially, economically, the violation of their basic rights and the lack of political will on the part of the Chinese government in resolving the issue of Tibet pushed these people to resort to such drastic actions. If Norbu Dondrup were referring to this as experiencing an unprecedented good time in history then our people would happily prefer not to.

And the delegation seems to have totally forgotten that Belgium is a sovereign state, which upholds the principles of democracy and rule of law, unlike the Chinese authoritarian regime. Belgium is mature enough to make its own decision and they do not need to be lectured on who to allow and who not to allow into their country. This is very much their internal issue and if China does not want other countries interfering in theirs, they should refrain from doing it.

The delegation seems to have invited the Belgian MPs to Tibet to see for themselves the current state of play. If China wants to be taken seriously, then they should give Belgian lawmakers unfettered access to Tibet.

Rigzin Choedon Genkhang is EU Advocacy Officer at the Bureau du Tibet, Brussels. Disclaimer: The view expressed above is the author’s own.