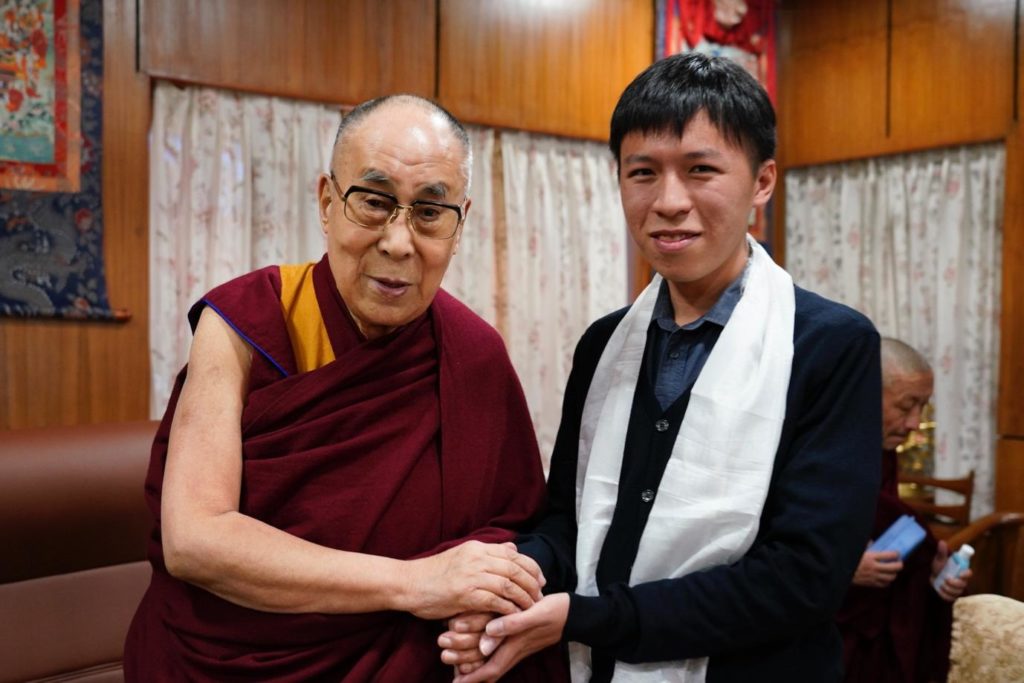 Yujian Zhang during an audience with His Holiness the Dalai Lama at His Holiness’ residence in Dharamshala. Photo/OHHDL

Opinion piece by Yujian Zhang, a Chinese scholar based in Australia.

An age gap of 60 years between two people could enlarge the distance whereas a Sino-Tibetan conversation between an elder and an adolescent sparked ideas.

Situated in East Asia, Tibet is the most mysterious region in our contemporary society where the Sino-Tibetan relationship started long before the current conflicts. Looking back to the 20th century, we are well informed of the heart-breaking story in this plateau. With Mao’s direction and policy including the Cultural Revolution and the Great Leap Forward, the relationship between Han and Tibetan deteriorated. Nowadays, the misunderstanding is escalating, not diminishing.

7 years ago, when I was still a high school student, a special opportunity came to me when I walked into the office of Head of Social Science where an old man’s appearance from a textbook drew my attention. It did not take a lot of effort to recognise the elder, the Dalai Lama. Following his messages with the information delivered by global media after leaving Mainland China, I started to see the comprehensive Dalai Lama about whom western media construct peace and love and on whom the propaganda of the Communist Party smear a portrait of “a wolf in monk’s robes.” Given the fact of promoting propaganda for decades, the misunderstanding between people in mainland China and the rest of the world is becoming wider. It is not uncommon to see the “panic attack reaction” from people from the Mainland when merely hearing the name of the Dalai Lama. 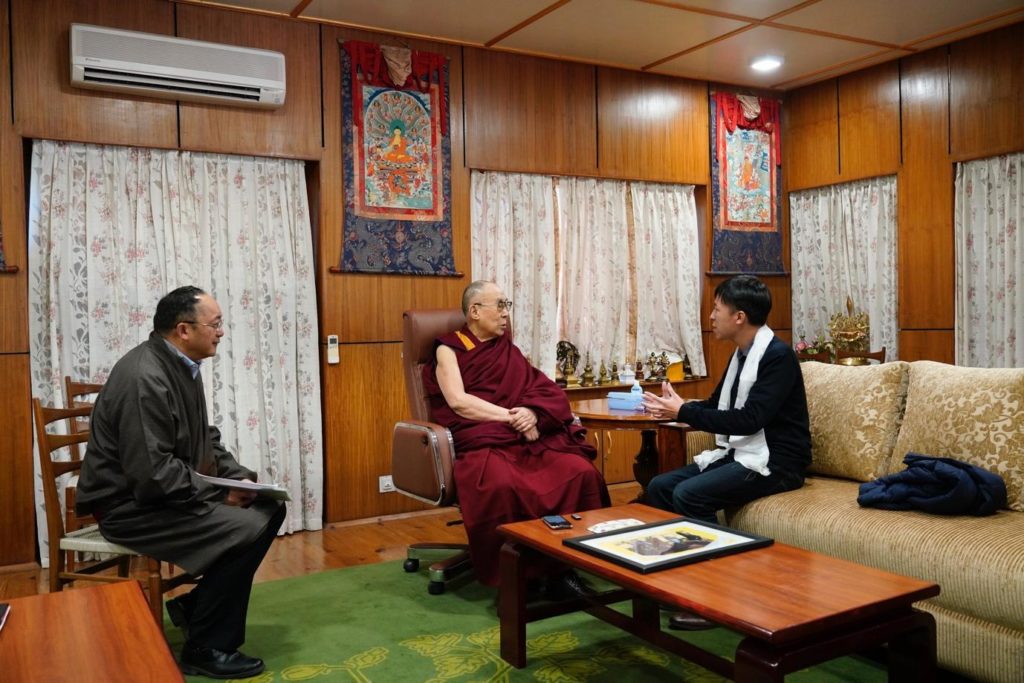 Yujian Zhang in conversation with His Holiness the Dalai Lama at His Holiness’ residence in Dharamshala. Photo/OHHDL

My curiosity lasted for years prior to my own exploration of Tibet relating to its history, language, culture, religion and politics. Looking back to the history between 1940 and 1960, the 17 Point Agreement, which is survived under the censorship and remains in silence to the majority in China, was a famous historical document depicting the hardship and endurance from Tibetan people. With having the big hats of “Tibetan Independence” and “Separatism,” which is a common practice and heritage from Cultural Revolution, the mainland Chinese people are prevented by these great hindrances to see their real demand, the Middle Way Approach.

This policy, which for me and many Chinese people inside or outside of China, is to confirm the status of Tibet, consisting of three traditional provinces that are U-Tsang, Amdo and Kham, not corresponding to the Tibetan Autonomous Region, be part of the People’s Republic of China. Every time when sharing the policy with its detailed content to my Chinese friends, the attitude of them is altered because they simply believe not separating Tibet out of China is a win-win approach. They are often surprised when they perceive the whole picture in which Central Tibetan Administration (formerly known as Tibetan Government in Exile or Tibetan Kashag Government) and the Dalai Lama have not been seeking independence for decades. Nevertheless, the deception from communist propaganda has clouded their vision and judgement for a long time given the fact of many of them living overseas who are able to receive information pertaining to these policies easily. 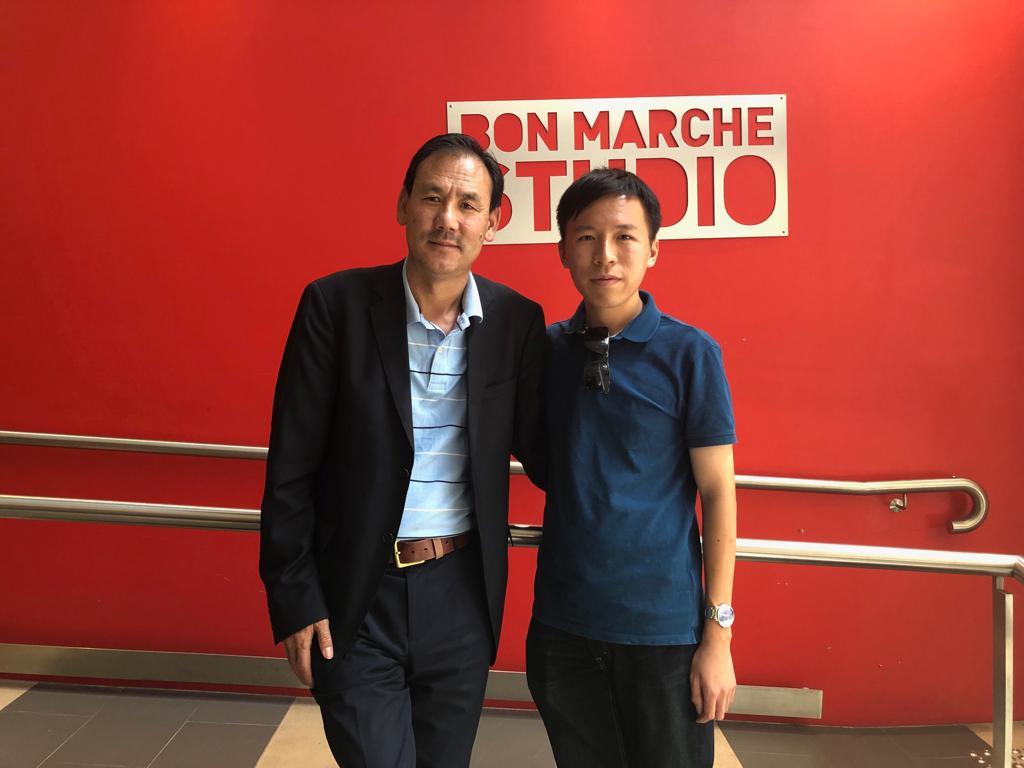 The most effective method to tackle the problem and reduce the misunderstanding is the Sino-Tibetan communication encouraged by His Holiness the Dalai Lama and Central Tibetan Administration. From the Tibetan side, the Chinese Liaison Officer (CLO) plays a significant role in resolving the misunderstanding and conflicts between both parties. There are three CLOs appointed in three main continents: North America, Europe and Australia. I was fortunate enough to have the opportunity and accessibility to meet with the CLO, Mr Kelsang Gyaltsen, in Canberra. Medium-sized height and Tibetan accent-mandarin are the first impressions I gathered from him from my first trip to Sydney where we met at the University of Sydney Technology. Having had a thorough discussion with him, it certainly enhanced my knowledge about Tibet even further. If we, Chinese people from the Mainland, are able to have the chance of exchanging our ideas and thoughts, it is not impossible to eliminate the conflicts and misunderstanding between both sides. This journey played a pivotal role in obtaining my private audience with His Holiness the Dalai Lama.

Carrying the mood of excitement and joy, I started my journey to the Indian sub-continent. Stopping over in New Delhi does bring some adjustment to my body and mind, given the time zone difference between Australia and India. A quick message popped up before flying to Bodhgaya, a sacred Buddhist site where the Buddha attained his enlightenment, informing me of the possible changes in the audience with His Holiness due to change in His Holiness’ schedule. I was still executing my original plan of going to Bodhgaya to attend the teachings. Amidst the hustle, I had an agitated mind on the flight, to Gaya. Bodhgaya does not seem to have changed compared with my previous visits. It’s still the same, except it is another year.

Time passes quickly, His Holiness is no longer younger; my private audience was confirmed eventually to be held at His Holiness’ residence in Dharamsala, Himachal Pradesh where the old wise man has spent six decades in here since fleeing from his homeland. Every year, visitors from every part of the world come to this place, to listen to his advice and opinion. Tibetan refugees risk their lives across the Himalayan mountains to this paradise in which freedom still exist; meanwhile many Chinese devotees who are Tibetan Buddhism followers go through great difficulties to pay the elder a visit. 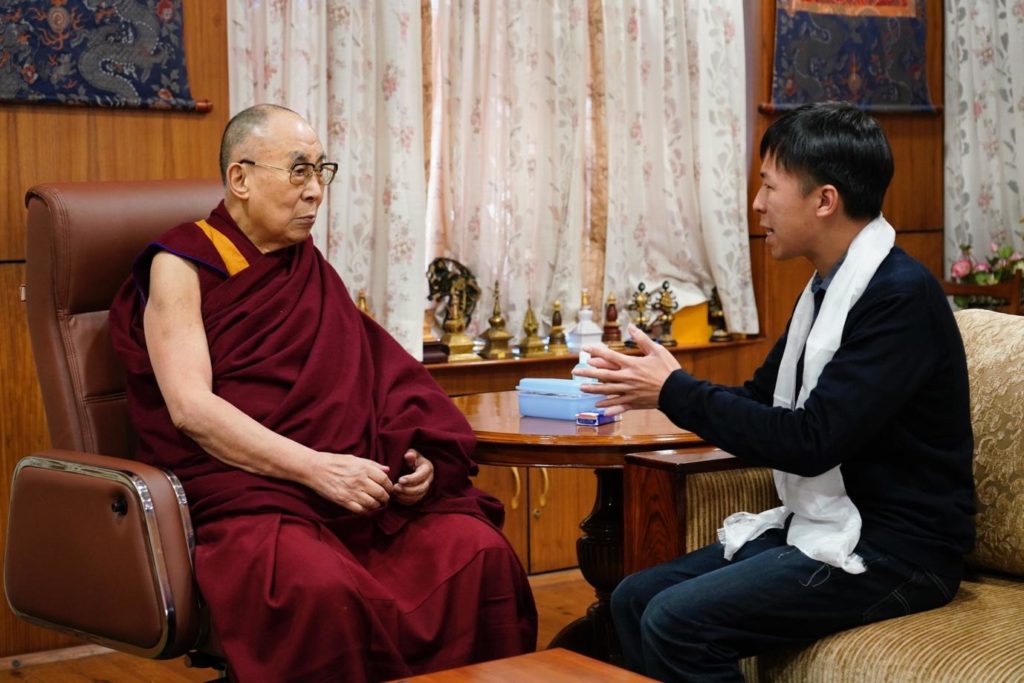 Yujian Zhang in conversation with His Holiness the Dalai Lama at His Holiness’ residence in Dharamshala. Photo/OHHDL

Many people would say it is not easy to have communication between two people whose age gap is greater than 60 years, whose ethnic identity causes contradiction and whose social roles are different. On the contrary, I would say it is certainly not this talk where great ideas were sparked, communication was active and the age difference was irrelevant. There are four major points which I would love to share with others mentioned in my interview from Voice of Tibet: Firstly, gender equality: His Holiness mentioned that the Buddha ensured equality among male and female practitioners, that is Bhikkhus and Bhikkhunis are equal. At the time of coming to India, His Holiness proclaimed that the nuns must study in monastics communities like their counterparts, monks, undertaking serious study, to obtain Geshe degree which takes 20 years approximately.

The second point is the importance of Nalanda tradition, the name of which he prefers to Sanskrit tradition. This tradition relies heavily on psychology and logic. Sanskrit or Nalanda tradition emphasises not only faith but also truth, combining both logic and practice, like Buddha taught his followers to examine his teaching carefully. Even Master Nagarjuna refuted the teachings by Buddha, as long as it is against logic which is seen as a very scientific approach. Quantum physics is newly popular in the west, however, the accumulation of this discipline has lasted for a long period of time in India. Every time His Holiness exchanges ideas with scientists, logic play an important role. Nalanda tradition, from which Chinese Buddhism is also derived is able to sit side by side with modern science, where more time is needed on studying Dharma teaching and doctrines. Lay devotees also need to study the teaching which should not be left for the Sangha to study. His Holiness advised me that I had to study thoroughly in Buddha-Dharma. Nalanda tradition could be regarded as an academic subject in relation to how to research and observe, attain inner tranquillity, corresponding to logic and psychology respectively. Reciting the name of Buddha does not bring a lot of assistance. 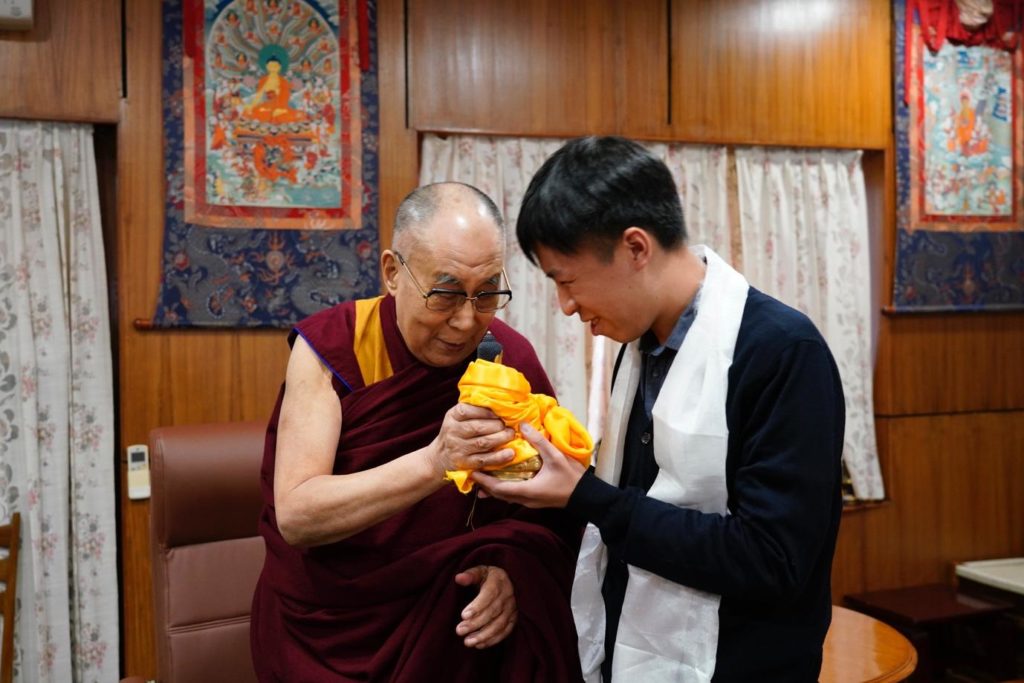 His Holiness the Dalai Lama presents a Buddha statue to Yujian Zhang. Photo/OHHDL

Thirdly, Communist Party of China mentioned that Buddhism is able to work with socialism at the same time as said by His Holiness. The real socialism means compassion, respecting other people’s rights and looking after ordinary people who suffer from poverty; these are the goals of socialism. Contemporary China is a mixture of socialism and capitalism. Socialism is only lip service. In reality, it is all about money.

Before the completion of our discussion, His Holiness mentioned his meeting with the former US President Barack Obama, informing him that he ought to take more responsibility for world peace after His Holiness.

This meeting with His Holiness benefited me greatly and I am fully convinced by his wisdom and great vision. That is why I have been encouraging my friends, especially my friends in China, should come to Dharamsala to meet with the 80-year-old elder in person, to be inspired by his wisdom and his care for the world.