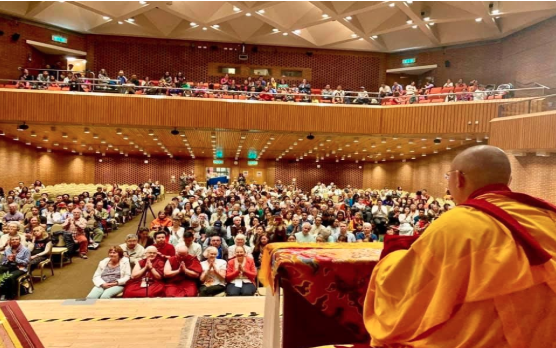 London: The 7th Kyabje Yongzin Ling Rinpoche arrived in UK’s capital city London, from Valencia, on Saturday, 20 April 2019 for a nine-day visit. Sonam Tsering Frasi, Representative of His Holiness the Dalai Lama for Northern Europe, Poland & the Baltic States along with Trustees of Jamyang Buddhist Centre London & Leeds and the chair & council members of the Tibetan Community in Britain welcomed His Eminence upon his arrival at the airport. This is His Eminence Ling Rinpoche’s first-ever visit to the United Kingdom and this visit is jointly hosted by Jamyang Buddhist Centre, Tibet House Trust & the Tibetan Community in Britain.

Ling Rinpoche began his UK program with a visit to Tibet House, London on Sunday, 21 April 2019 where a traditional welcome ceremony was arranged by the Office of Tibet, also attended by the council members of the Tibetan Community in Britain. Tibet House Trust is celebrating its 25th Anniversary Year since its founding in 1994.

Later that evening, Ling Rinpoche met with the Tibetan Community in Britain and blessed them all individually, much to the delight of the over 300 Tibetans gathered to welcome him. In his address to the Tibetans, Rinpoche stressed the need for the younger generation of Tibetans living abroad to make the best use of the excellent educational opportunities available to them and to preserve their unique identity, language and culture.

The Kensington Town Hall in central London area was a place of activity from early in the morning on Easter Monday, 22 April, where His Eminence Ling Rinpoche bestowed White Tara Initiation (that He had received from His Holiness the 14th Dalai Lama) to more than 500 devotees. Extolling the virtues of compassion and wisdom that White Tara represents, Ling Rinpoche called on the devotees to practise compassion in their daily lives towards all sentient beings and to develop the light of wisdom to banish the darkness of ignorance.

During the post-lunch session in the same venue, Ling Rinpoche spoke on the topic: The Buddhist Science of Happiness. Acknowledging that he could not explain the topic through scientific experiments and tests, he, however, mentioned that it is common knowledge that a calm, compassionate and contented mind is crucial to happiness and wellbeing. Reflecting on the advancements in science and technology, which has made life materially comfortable and easier to humankind, he pointed that despite these, human beings are still suffering from stress, anxiety and depression etc. because of neglecting the development of inner qualities such as loving-kindness and warm-heartedness. Explaining that self-centredness has no advantages whatsoever, he urged everyone to practise altruism and caring for others, which ultimately will result in more happiness for oneself.

There were many interesting and challenging questions put to Ling Rinpoche by the audience members after his talk, ranging from questions such as whether he considers money to be the root of all evil, how to teach meditation to young children, importance of laughter in one’s life, to questions about his health (following the major accident he was involved in 2012). He gracefully took all the questions and answered them all with great clarity. The audience expressed their deep appreciation to His Eminence for his talk and interaction with loud applause as he left the stage. Overall, Ling Rinpoche was able to directly reach out to a little over 750 people through his teachings in the morning and the public talk in the afternoon.

On Wednesday, 24 April 2019, the Office of Tibet, London organised a visit to the Parliament at Westminster for Ling Rinpoche, where he was greeted by Rt Hon Tim Loughton MP, Conservative Party, and Hon Chris Law MP, Scottish National Party, the co-chairs of the All Party Parliamentary Group for Tibet in the UK Parliament. His Eminence had a detailed interaction with the two MPs over tea during which they discussed a lot of topics ranging from the current uncertainty in the UK over Brexit to the Tibet issue. His Eminence Ling Rinpoche expressed his appreciation to the two MPs and all supporters in the Parliament for their support and urged for their continued support.

After giving teachings at Rigpa UK and Jamyang Buddhist Centre, Ling Rinpoche departs London on 26 April 2019 for Leeds, north of England, where he will continue giving teachings. He will also be meeting with the Tibetans living there.

Ling Rinpoche is scheduled to depart from the UK on 28 April 2019. 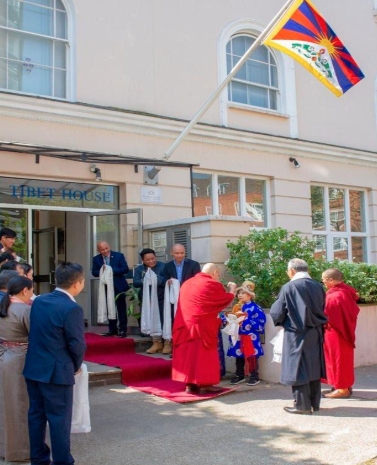 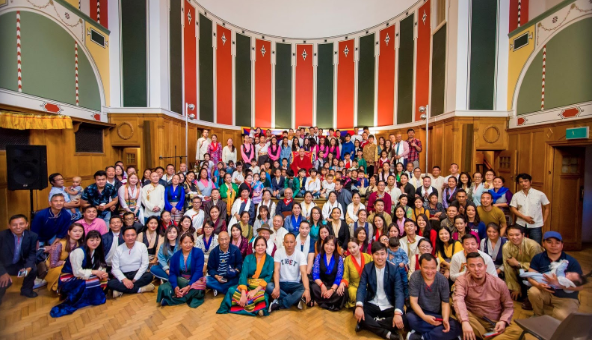 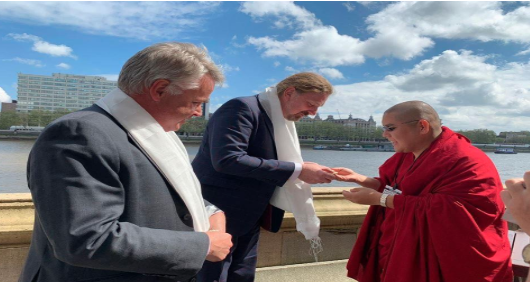 Ling Rinpoche with the Members of the All Party Parliamentary Group for Tibet in the UK Parliament.