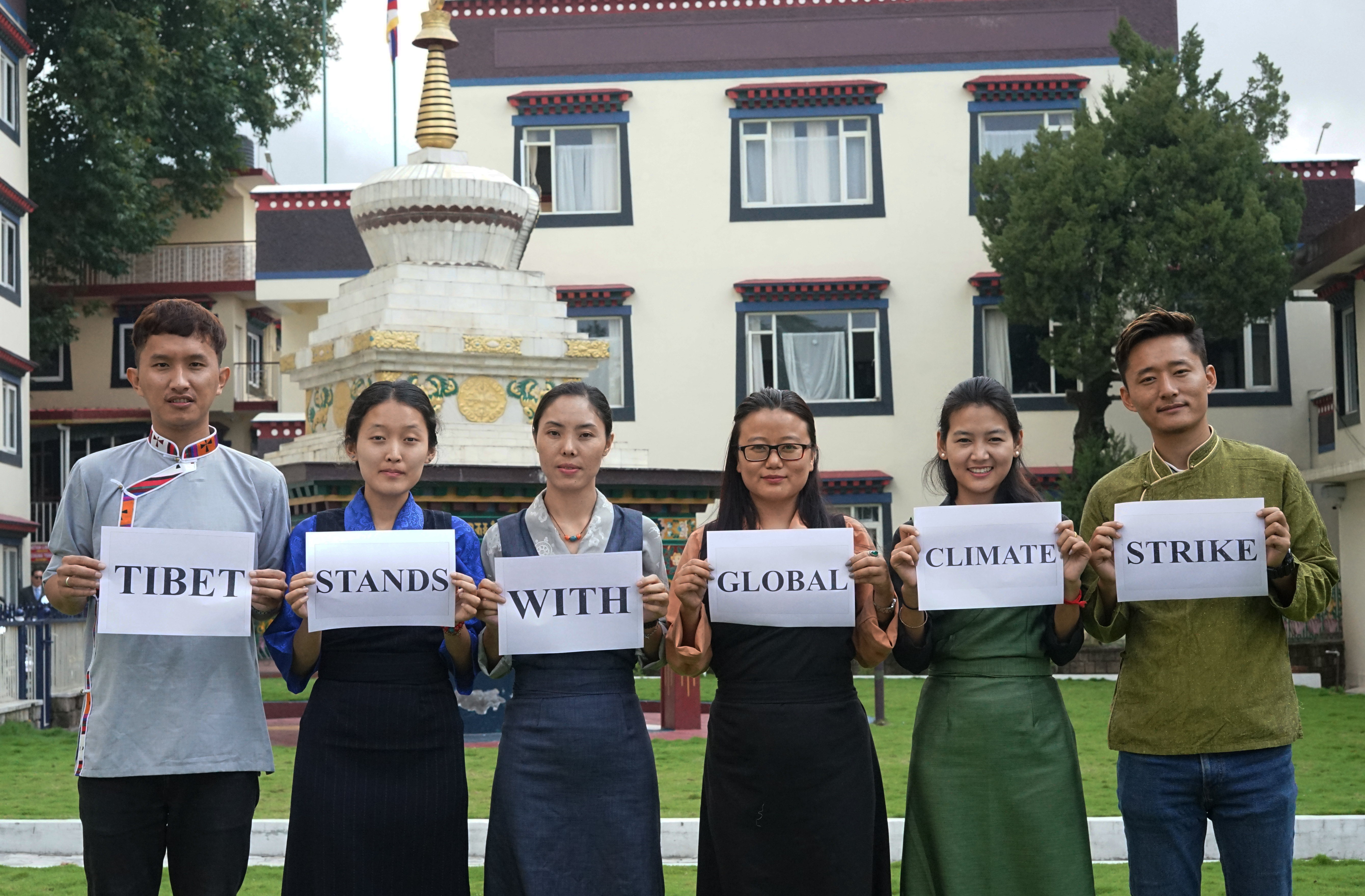 The weeklong climate strike being observed across 150 countries has received a massive support from one of the most organized refugee communities in the world – the Tibetans in exile. The Tibetan diaspora, which has a presence in at least 40 countries, is participating in the protests while being worried about the severe impact of climate change in their homeland, too.

The impact of climate change on the Tibetan Plateau, one of the most glaciated regions on earth, has been extreme. The plateau has seen unprecedented number of natural disasters occurring simultaneously across the region since 2016, primarily due to rising temperature and increased rainfall. The temperature rise on the plateau is 0.47°C per decade, three times faster than the global average of 0.12°C per decade. This has led to fast melting of glaciers in the east, rapid thawing of permafrost (frozen soil) in the northwest and drastic expansion of deserts beginning from the north. Tibetans are concerned that the new climatic pattern emerging on the world’s highest plateau is changing too quickly for the inhabitants to adapt.

The climate strike initiated by Greta Thunberg, an inspirational teenage environmentalist, got strong support from the Dalai Lama of Tibet, one of the most respected global figures. In a letter to the teenage icon, the Dalai Lama wrote, “It is encouraging to see how you have opened the eyes of the world to the urgency to protect our planet, our only home. At the same time, you have inspired so many young brothers and sisters to join this movement.”

The Dalai Lama himself is an ardent supporter of environmental protection, whose efforts to address the issue began as early as the 1950s, when he was a teenager too. He is probably one of the most consistent environmentalists.

The Tibetan Plateau, where the Dalai Lama was born in 1935, is a vast mountainous region with an area of 2.5 million sq. km., which is nearly 2% of the earth’s land surface. The region was perceived as “one great zoological garden” by early explorers to the plateau. Some scientists have compared its known biodiversity to that of Amazon Rainforest.

Unfortunately, Tibet’s forest, which was one of the oldest reserves in all central Asia until Chinese occupation in 1949, was reduced to 13.57 million hectares from 25.2 million hectares, about 46% reduction between 1950 and 1985, with an estimate market value of $54 billion. The alarming scale of logging in some parts of Tibet led to the 1998 Yangtze flood and the 2010 Drukchu (Zhouqu) flood, killing thousands and displacing millions in China.

The once rain-scarce mountainous terrain of Tibet has witness consecutive increased torrential rainfall for last the 4 years, causing simultaneous floods and landslides in many parts of Tibet. A twin landslide (October 11 2018 and November 3, 2018) in Palyul county in Eastern Tibet blocked the Yangtze River – the longest river in Asia and third longest in the world. Eleven days of blockage completely inundated the nearby Bolu Township in Tibet and the horror of a sudden collapse of the artificial barrier caused massive panic in the low lying regions of China through where the river flows.

The Tibetan participants at the climate strike have called for the protection of the “Earth’s Third Pole”, as the Tibetan Plateau is popularly referred to by scientists. The presence of 46,000 glaciers, covering an area of 105,000 sq. km., makes the plateau the largest source of accessible fresh water on the planet and the third largest reservoir of ice, after the North and South Poles.

With the constant temperature rise in Tibet, the once permanently snowcapped mountains are quickly receding at an alarming rate. In 2015, Professor Kang at the Institute of Tibetan Plateau Research found out that there had been no net accumulation of ice in the region since 1950s, clearly indicating a regular loss of glaciers. Another scientist, Professor Yao Tandong of Chinese Academy of Science, even warned that 2/3rd of all glaciers on the plateau could be gone by 2050 if the current rate of glacier retreat continues.

The Tibetan Plateau has a global ecological importance. Standing at an average elevation of more than 4000 meters above sea level, it influences the timing and intensity of the Indian and the East Asian monsoons. Scientific studies have even linked the worsening heat waves in Europe and northeast Asia to the plateau’s receding snow cover.

The Tibetan participants at the on-going climate strike have also called for respect for Tibetan cultural way of life and its role in environmental protection.

The cultural way of life in Tibet, which was greatly influenced by Bon and Buddhist traditions, both of which strictly forbid hunting of wild animals. For example, successive rulers in Tibet issued stringent edicts to ban hunting at several ecological sites during various periods of its history.

However, with the Chinese occupation, Tibet witnessed a sudden disruption in its age-old tradition of causing minimum harm to the natural environment and its wild life inhabitants. Many elderly Tibetans, who had to flee Tibet during the Chinese invasion in the 1950s, had seen herds of wild animals slaughtered by the People’s Liberation Army (PLA) with their machineguns. Such hunting practice with a horrifying scale of wild animals been killed instantly was utterly alien to the land and people of Tibet.

Since the ecological health of the Tibetan Plateau is crucial for a stable social, economic and environmental well-being of many countries, any further degradation of the land will exacerbate the dire situation and could bring catastrophic consequences for Tibet, China and the world.

As Tibetans have joined hands with the international community at the global climate strike, the world, too, must support Tibetans in protecting their plateau from any further degradation.