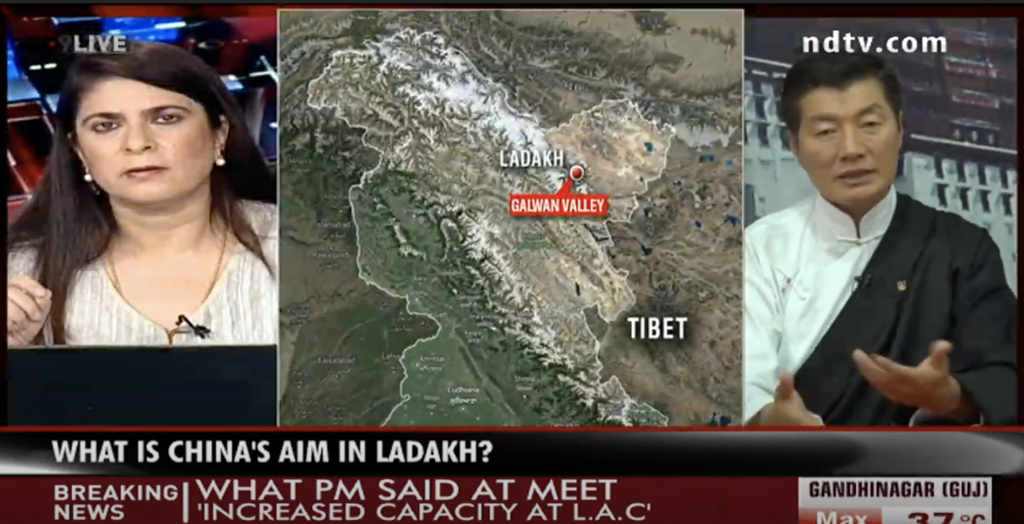 Dharamshala: CTA President Dr Lobsang Sangay told NDTV this evening that the military standoff at the Indo-China border would continue until Tibet is restored to its historical status of a peace zone, a buffer between the two nuclear powers.

He also warned of the imminent threat of intrusions at Ladakh as well as Arunachal Pradesh and Sikkim. “China is well ahead in encircling India and Ladakh incident is one part of the strategy.”

Responding to a question on what India needs to be alert for at this point, Dr Sangay said the Tibetan leadership have been alerting the world including India for the last 60 years.

“Tibet was occupied and you are next. No one listened to us for 60 years and this is what’s happening.”

Meanwhile, Prime Minister Modi, Defense Minister and Foreign Minister has called the first All-political party meeting to discuss the latest developments at the LAC where 20 Indian soldiers lost their lives in the recent violent clash with the Chinese.

Sonia Singh: Dr Sangay, as you’re watching what’s happening currently in Eastern Ladakh, of course, the Galwan valley was at some time on the Indo-Tibet border. It’s now become the India China border. What would you say about China’s attempt to actually try to claim this as their territory? Is this something which gives you a sense of deja vu in a way?

President: Yes, if you look at the Simla Convention of 1914, the Chinese government did not agree primarily to the border demarcation between Tibet and China and that was one of the reasons why they moved into Tibet and they built a road connecting China to Tibet. Through the roads came trucks, guns, tanks and occupied our country in 1959. Similarly, they are making inroads and border incursions taking place in Ladakh. Because all along, after the occupation of Tibet, Chinese leader Mao Zedong and others have said Tibet is the palm and they have to capture the five fingers now. They are Ladakh, Sikkim, Arunachal Pradesh, Nepal and Bhutan. What happened in Doklham 2016 is part of that incursion into the five fingers. And today in Ladakh is the second of the five fingers. Yes, there is deja vu because we were occupied with these same strategies, and now they are coming after all the five fingers including Ladakh.

Sonia Singh: Series of moves about China’s encirclement strategy in which, we are seeing Nepal parliament approving a new map suddenly. There were firing at Indo-Nepal border by the Nepalese police about a week ago. These are the areas we haven’t seen as conflict earlier at all. Sri Lanka, as well there are increased worries of Chinese presence. What do you think India needs to be alert for at this point?

President: I think it would be good to remember the statement made by late Defense Minister, George Fernandes, who said, in fact for India, China is adversary no. 1. Because if you look at LOC and LAC. LOC is much shorter. LAC is 3488 km long border, essentially and historically border between Tibet and India. It is at least two times if not three times longer than LOC which borders with China. Hence China’s policy of encirclement is clear. Five fingers include Bhutan and Nepal. Already in Bangladesh, Sri Lanka, Maldives, Pakistan already an all-weather friend.

They are already encircling India and India has to be aware of it. This is short meets long term strategy. The Ladakh incident is one part of the strategy. So we have been saying this for the last 60 years. Tibet was occupied and you are next. No one listened to us for 60 years and this is what’s happening.

Nepal is also facing tremendous pressure from the Chinese government. There’s a small number of Tibetans less than 10,000. They are also a lot of challenges primarily because of Chinese government pressures. Now in Nepal, there are more Chinese in Nepal than Tibetans.

Sonia Singh:  The Presence of Tibetan government in exile and of His Holiness the Dalai Lama has been the biggest thorn in China’s flesh as well as it gives us strategic power play or diplomatic play to have His Holiness here. But we have seen there has been mixed signals which of course, in 2014 there seem to be much more openness to His Holiness but the 60th anniversary to mark His Holiness leaving Tibet, Indian govt. officials were told to stay away from it. You weren’t allowed to unfurl a Tibetan flag during a Dokhlam standoff, and the Dalai Lama allowed to go to Tawang which angered the Chinese but again this has gone down. How do you think India should actually use the fact that the biggest thorn in China’s flesh is His Holiness the Dalai Lama [who] is on Indian soil and could perhaps be used more strategically.

President: His Holiness calls himself the proud son of India and there is no better person than His Holiness who talks about India, the greatness of Nalanda tradition, secularism of India. For example, when His Holiness met President Barack Obama, he spent 45 to 50 mins of which first 25 minutes he was talking about India. So there’s no better person than His Holiness who talks about the greatness of India. So I don’t think he opts to be used by anyone. He himself voluntarily loves India and spreads the message of Nalanda tradition all over the world. For Tibetan people, I think there is no country or people like India, who supports us. India and the people of India support us the most. Our relationship from time to time goes up and down. Overall I think India has supported us the most.

Having said that, China says Tibet is one of their core issues. Now India should also say, for us, for geopolitical reasons, historical, spiritual and cultural reasons, Tibet is also one of the core issues. Unless you solve the issue of Tibet, you cannot solve the border issue. Tibet is the main interest of China. Both India and China should sit down and solve the issue of Tibet and rest will be taken care of. His Holiness the Dalai Lama has also called for Tibet to be declared a zone of peace, to demilitarize Tibet. When he said that, he is referring to the historical status of Tibet as the buffer zone as the zone of peace between India and China. India and Tibet had the peace [then] but now is missing since the Indo-Tibet border became Indo-China border. All these incursions are happening and continue to do so.

Sonia Singh: Absolutely. When the Into-Tibet border became the India-China border, as a hot zone as it were, perhaps the PM Modi and the Dalai Lama haven’t had an official meeting yet. If that happens, it would be interesting to see China’s reaction but thank you so much, Dr Sangay, for joining us tonight.