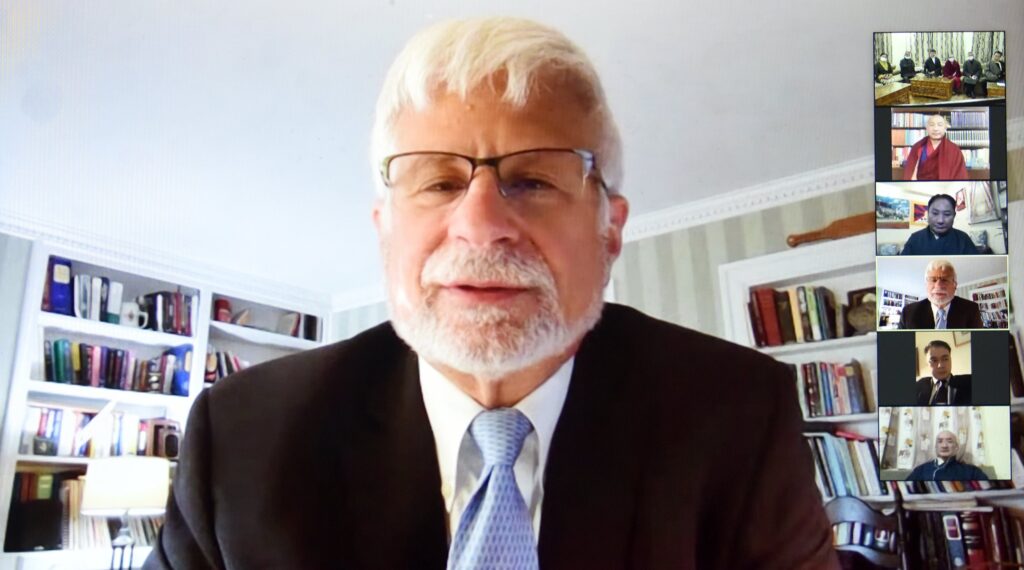 Dharamshala: In an exclusive virtual visit of Central Tibetan Administration (CTA) hosted by the office of the US Special Coordinator for Tibetan Issues and the CTA, Special Coordinator Robert A. Destro addressed the leadership of CTA highlighting the priority of his role and the essentiality of a coordinated team effort from the exile Tibetan Administration and the Tibetan people. Office of Tibet, Washington DC played a key role in organising and coordinating the meeting.

Expressing his appreciation to Secretary Mike Pompeo for entrusting the responsibility to serve the Tibetan people and their cause, Coordinator Destro said, “Our job at the State Department is to be useful and to be of service to all the Tibetan people. Your sense of the goal as what does vibrant Tibetan government looks like is for you to set and our job is to be of service to you as you work through the preservation of the Tibetan community, Tibetan language, Tibetan Buddhism, and your identity”.

On the successful preliminary election held recently by the Tibetans in exile, Special Coordinator Destro expressed hope that the Tibetan parliament in exile continues to develop as a robust institution that continues to play a great leadership role in the life of every Tibetan.

“We also know how hard it is going to be because Tibetans are all over the globe but the fact that we are meeting like this today certainly means that it is possible to keep the discussion going about the Tibetan language, culture, and religion. We at the State Department are committed to helping you preserve your identity.”

“We want to make sure that as we go forward, we have a really good sense of all of the practical matters we can help you with. It is not our job to preserve Tibetan culture, language, and religion. That job is yours but we can certainly be of assistance and I can assure you that here in the US there is broad bipartisan support across the political spectrum to support the efforts of Tibetan people to preserve their unique identity” he added.

One of the things that Coordinator Destro said he was going to try and do before his term ends next Wednesday is to begin the process of reaching out to other former special coordinators so that they can stay in touch with the CTA and the Tibetan people. In order to do that he urged the Tibetans to tell them about what they think is the highest investment use of the Special Coordinator’s office.

The other thing Special Coordinator suggested is getting the US government to build an ‘international coalition of countries’ that will help the Tibetans protect their rights and preserve their unique identity.

“We have urged like-minded countries to pass their own versions of the Reciprocal Access to Tibet Act so that the world can travel to Tibet as freely as the Chinese can travel in our countries and bear witness to what’s going on in Tibet,” he said. However, he asserted that the goal cannot be accomplished by the effort of his office alone and thus urged complete cooperation from the Tibetan people and their exile government.

He emphasised that the Tibetan people are the most effective advocate in this and the only way to push forward the goal is by working together.

Sikyong Dr Lobsang Sangay who moderated the entire webinar said that the appointment of a Special Coordinator was seen as a very powerful gesture towards the Tibetan people and the Tibetan cause and in addition, it sent a powerful message of hope to the Tibetans inside Tibet.

“You are the only special coordinator who within a short duration, has participated in so many webinars and issued so many statements. You deserve the credit for being the most active and most vocal spokesperson for the Tibetan cause”, said Sikyong.

Sikyong further appealed to Coordinator Destro and his team to prepare an adept report on Tibet emphasising and highlighting the historical status of Tibet for the coming February and March report on Tibet. In addition, he also urged the special coordinator’s office to establish a coalition between the US ambassadors in different countries and the offices of Tibet since CTA was formally acknowledged and recognised by the US government.

Kalon of religion and Culture, Ven Karma Gelek Yuthok thanked Coordinator Destro and his colleagues’ support toward the religious freedom of the Tibetan people that became more apparent and intensified through the recent enactment of TPSA 2020.

“The bill really means a lot to us, and we still can’t believe that such a thing could happen,” he said while thanking the US government and the people and further assures to do best in the preservation front of Tibetan national and cultural identity.

Kalon of Finance, Karma Yeshi expressed his gratitude to the constant financial support extended by the US government which he said is extremely beneficial not only to advance the political struggle but also to sustain the evolving Tibetan administration as he mentions the USAID approved direct funding recently. Kalon also appealed for an increase in direct funding needed for CTA to reach its full potential.

Education Kalon, Dr. Pema Yangchen too expressed her appreciation for the enormous financial support extended toward the education sector of the Tibetan community in exile, in particular, the opportunities given to the Tibetan students to study in the US on scholarships which Kalon mentioned has proven very contributable and valuable to the community’s effort in the development and preservation of Tibetan language as well as culture and further appeals for continued support.

Extending his gratitude note, Home Kalon Sonam Topgyal Khorlatsang said that without the fund and donations received from the US and other donors, the Tibetan administration and the Tibetan communities scattered across India, Nepal, and Bhutan couldn’t sustain and couldn’t venture to achieve self-reliance only on the limited resources it possesses. The fund received by the CTA, he adds, is entirely spent on the purpose for which it was meant.

Updating Coordinator Destro on the various health-related services rendered by the Health Department, Health Kalon Choekyong Wangchuk said, “The financial support that we have been having from the government of the US under USAID and PRM has been the basic foundation at least in my department for running it successfully and efficiently serving the Tibetan exile community”.

Tibetan Parliament Speaker Pema Jungney began by introducing the Tibetan Parliament and its functioning. Crediting His Holiness the Dalai Lama for his determination and vision in establishing the democratic system, he updated Coordinator Destro on the chronicles of the establishment of Tibetan democracy and the subsequent becoming of a full-fledged democratic secular system of governance which was duly followed by the elections that brought 13 representatives – 3 from each province, 4 from Buddhist school, with the first members of Tibetan Parliament taking their oath on the 2nd of September 1960 which has since been observed as ‘Tibetan Democracy Day’.”

He described the composition of the Parliament which until 1990 the number of members of the Tibetan Parliament was not fixed. Today, there are 45 members of Parliament. Speaker further explained how and when the biannual Parliamentary sessions are held and what are the tasks involved in those sessions.

“In contrast to other democracies, the most unique feature of the Tibetan democratic system is that it is party-less where the public has more choices and power in electing their representative,” said the Speaker.

Deputy Speaker Acharya Yeshi Phuntsok, at the outset, asserted that it was due to China’s mishandling of the pandemic that had prevented the in-person meeting. He noted that “from 1998-2020, US has passed several resolutions and acts, and even before that from 1987-2020, most of the European Parliamentarians and some from Australasia, in New Zealand and Australia also adopted the resolutions and acts in favour of Tibet’s cause, the human rights violations and the preservation of Tibet’s culture and genocide inside Tibet and particularly for the resolution of the Tibet issue through dialogue and negotiation,” provided in the Tibetan Policy and Support Act of 2002 and in 2020.

He concluded by appealing the US State Department to help initiate the process of the resumption of dialogues and negotiations between the Representatives of His Holiness and Chinese counterparts which he recognized as the most important aspect to help the Tibetan movement.

Commenting at last on his web-meeting with the CTA leadership, Special Coordinator Destro said that in order to receive continued support from the USAID and PRM or any other donors the Tibetan administration in exile must overcome the challenge of broadening the base of support which he said is possible through a coalition of like-minded governments by encouraging them to contribute to the effort.

“Let’s get our wishlist together and let’s see how we can make it work”, said the US Special Coordinator for Tibet issues as he assures to make an effort on the practical suggestions discussed by the CTA leadership. 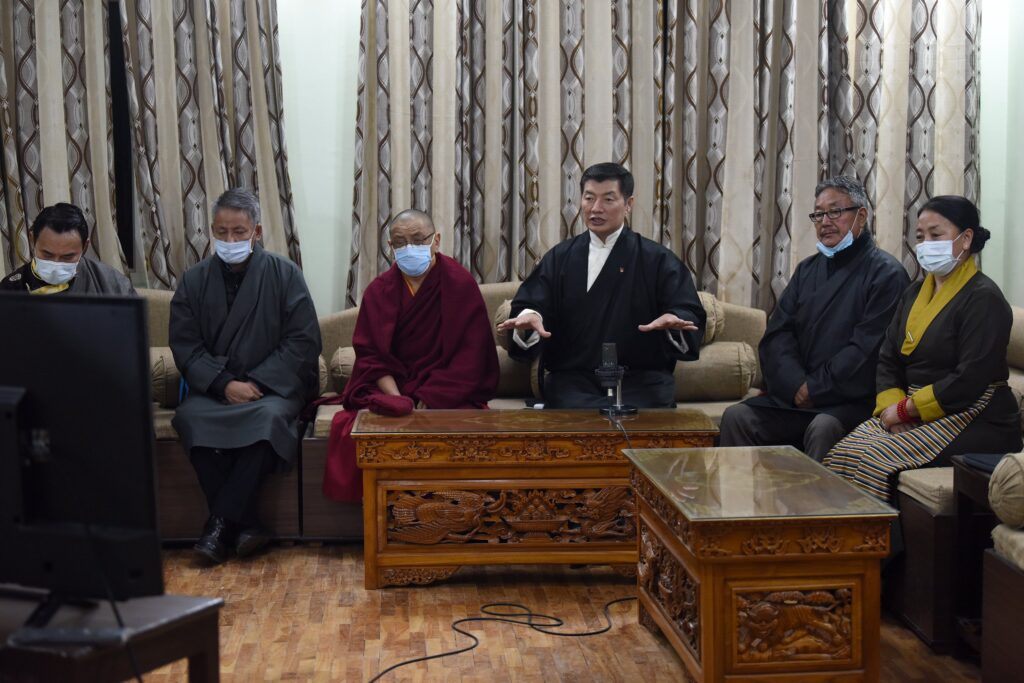 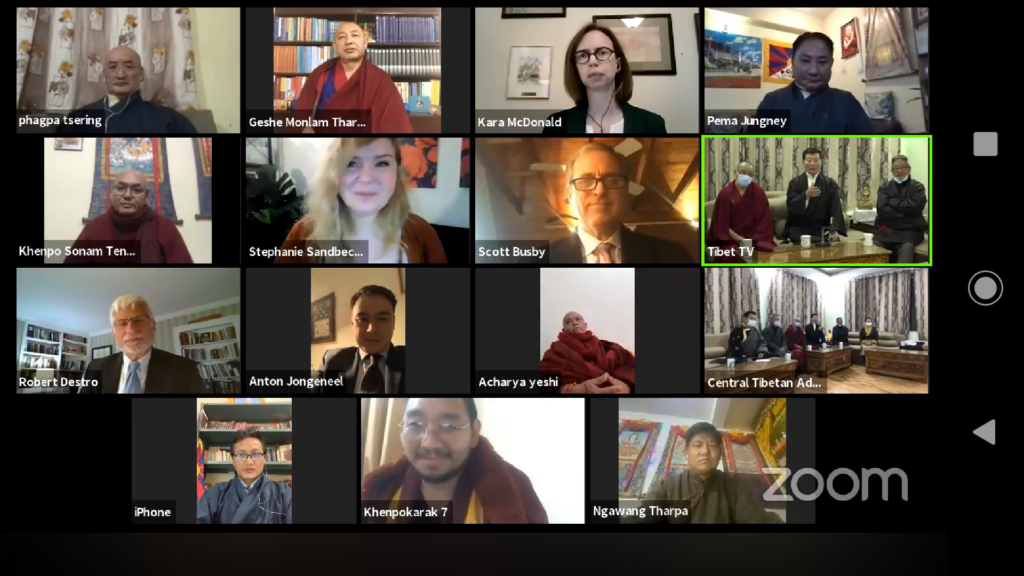 Speaker and members of the Standing Committee of the Tibetan Parliament in Exile meets Robert A Destro, US Special Coordinator on Tibet Issues, and his team members. Photo/Screengrab