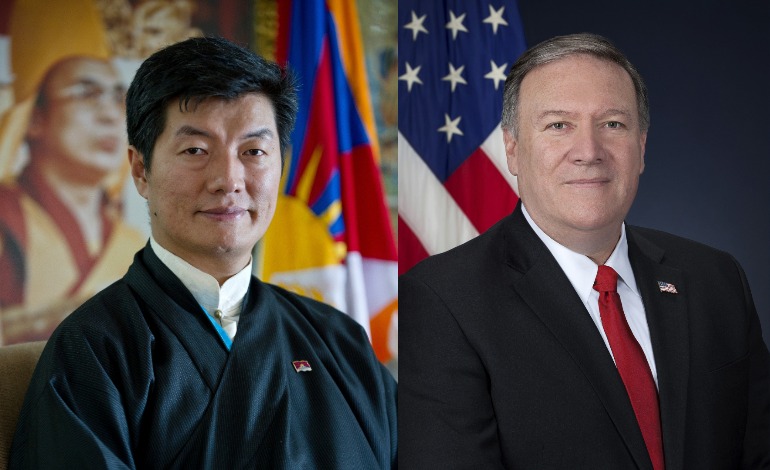 Dharamshala: The US Secretary of State Mike Pompeo issued a strong-worded statement on the 25th anniversary of the Panchen Lama’s enforced disappearance, demanding the Chinese government to release and “immediately make public the Panchen Lama’s whereabouts”.

The statement reiterated the United States concerns over China’s ongoing campaign to eliminate the religious, linguistic and cultural identity of Tibetans.

The President of Central Tibetan Administration, Dr Lobsang Sangay issued a statement today thanking the US Secretary of State “for not only consistently supporting the Tibet issue but also making a call for the Panchen Lama in the strongest words ever in a long time. This shows the US unwavering solidarity with the Tibetan people.”

Referring to the global call on China to release the Panchen Lama, CTA president said that “it sends a strong message to the Chinese government that the international call for Panchen Lama is stronger than ever and will continue to campaign for his release until he is able to return to his rightful place at the Tashi Lhunpo monastery in Tibet.”

Read the full text of the statement issued by the US Secretary of State Mike Pompeo:

“The Department of State has made the promotion and protection of religious freedom a priority, especially in China, where people of all faiths face severe repression and discrimination. As part of that mission, on May 17, we marked the 25th anniversary of the disappearance of the 11th Panchen Lama, Gedhun Choekyi Nyima, who has not appeared in public since the PRC government abducted him in 1995, at age six.

“The Pachen [Panchen] Lama is one of the most important figures in Tibetan Buddhism with spiritual authority second only to the Dalai Lama. But China’s persecution of the Panchen Lama is not unusual. The United States remains deeply concerned about the PRC’s ongoing campaign to eliminate the religious, linguistic, and cultural identity of Tibetans, including through the ongoing destruction of communities of worship and learning, such as the Larung Gar and Yachen Gar Buddhist Institutes.

“Tibetan Buddhists, like members of all faith communities, must be able to select, educate, and venerate their religious leaders according to their traditions and without government interference. We call on the PRC government to immediately make public the Panchen Lama’s whereabouts and to uphold its own constitution and international commitments to promote religious freedom for all persons.”

Earlier today Secretary Mike Pompeo tweeted on the Panchen Lama’s disappearance reiterating his call on the Chinese government to reveal the spiritual leader’s whereabouts and to end the state’s interference in religious practices.

It’s been a quarter-century since PRC authorities abducted the Tibetan Panchen Lama, when he was only six. He is now 31. The Chinese government should make known his whereabouts and allow believers of all religions in China to freely practice their faith without interference.