Trending This Week on Social Media: The US Signals its Support for Tibet via Reciprocal Access to Tibet Law

Tibetans around the world rejoiced the strong support demonstrated by the US government when President Donald Trump signed a bipartisan bill paving way for unfettered access to Tibet. “I couldn’t fulfil my father’s wish to visit our home country- Tibet for pilgrimage during his lifetime. I hope with this new law, I will be able to take my mother”, said Thinlay Chodon, a Tibetan-American based in New York. Tibetan-Americans like her are subjected to stringent visa process and interviews by China whereby all their family details are collected but are eventually denied a visa.

The Reciprocal Access to Tibet Act of 2018 was signed into law on Wednesday 19 December 2018. The legislation aims to deter China from imposing travel restrictions on US officials, journalists and citizens and thereby granting equal access to Tibet Autonomous Region and Tibetan areas as similarly enjoyed by the Chinese counterparts within the US. The Chinese officials/individuals involved in denying visas to Tibetan areas, as determined by the Secretary of State, will be denied a visa to the US.

Between May 2011 to July 2015 China granted only four out of 39 requests by US officials to access Tibet. The US officials and journalists who do get a visa are subjected to severe travel restrictions. Their trips, visits and interactions are heavily supervised and are only allowed to areas cordoned off for their visits.

Even the former UN High Commissioner for Human Rights, Prince Zeid Ra’ad al-Hussein in his opening statement of 38th Human Rights Council (2018) rebuked China for not allowing his staffs “unfettered access” to Tibet Autonomous Region amidst the deteriorating human rights conditions there. There were ‘more than 15 pending requests for visits’, he further added.

The law mandates the Secretary of State to submit a report to the Congress on the level of access granted to Tibetan areas within 90 days from the date of enactment and annually thereafter for five years. These reports shall be publicly available on the website of the Department of State. It further requires the Secretary of State to submit annual reports identifying the individuals whose visas were denied by China in a year and also the list of Chinese officials who were substantially involved in the ‘formulation or execution of policies to restrict access’ to Tibetan areas.

The Bill was introduced by Representatives Jim McGovern and Randy Hultgren in the House of Representative and by Senators Marco Rubio and Tammy Baldwin in the Senate. The Tibetan-Americans and Tibet Support Groups worked tirelessly in coordination with International Campaign for Tibet for the enactment of this Bill.

“On behalf of six million Tibetans I extend profound appreciation to the President for signing the bill into law,” said Dr Lobsang Sangay the President of Central Tibetan Administration.

“The United States has been among the pioneer countries in helping Tibetans to protect its unique culture and identity by welcoming His Holiness the Dalai Lama from 1979 followed by the adoption of The US Tibetan Resettlement Project in the 1990s, The Tibet Policy Act of 2002, the recent Reciprocal Access to Tibet Act,” said Pema Jungney the Speaker of Tibetan Parliament in Exile.

This new law was warmly welcomed by all the Tibetans and Tibet support groups who took to social media platforms to express gratitude and hope for free access to Tibet: 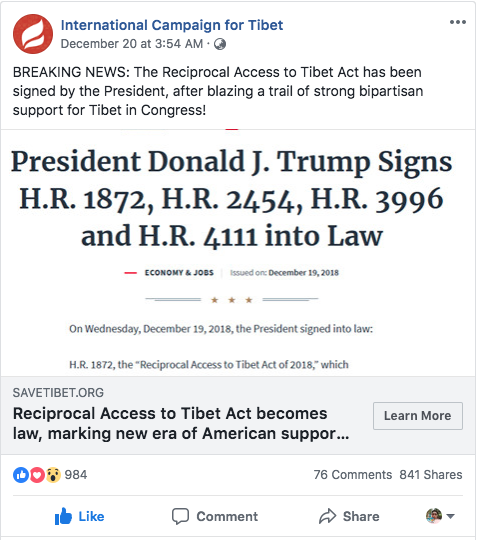 International Campaign for Tibet breaks the news of US President signing the Reciprocal Access to Tibet Act into law. Photo/Screengrab/@InternationalCampaignforTibet/Facebook 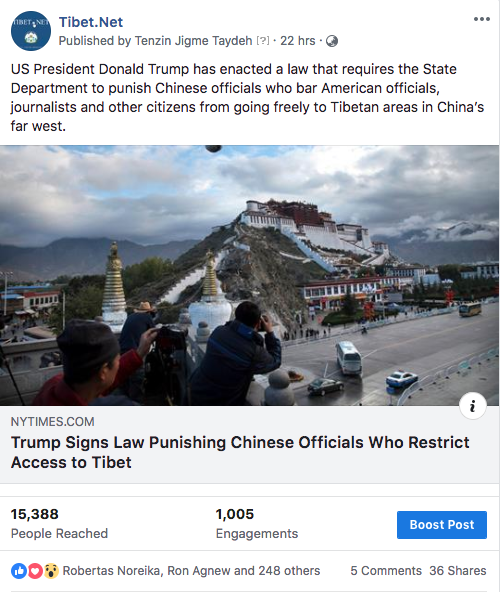 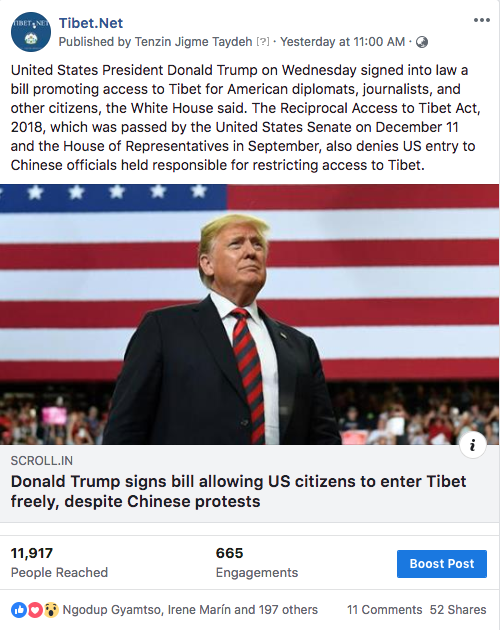 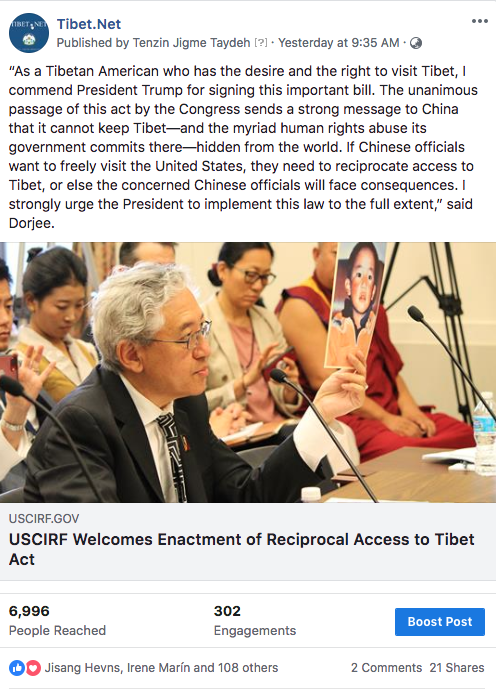 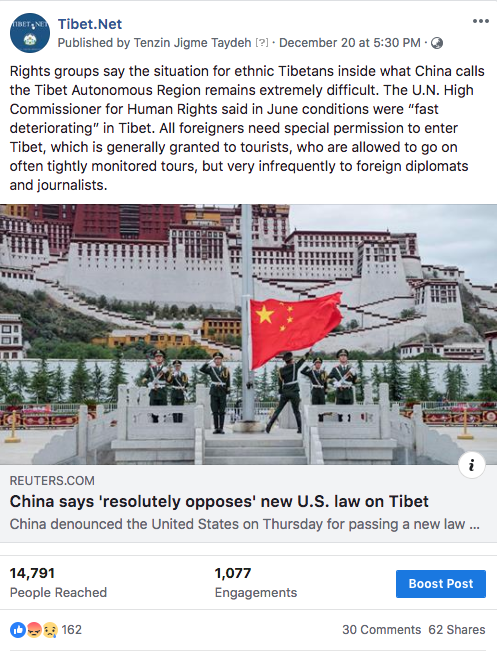 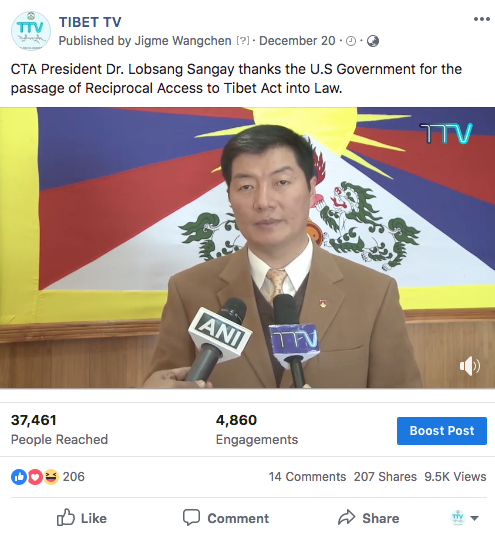 CTA President thanking the U.S Government for the passage of Reciprocal Access to Tibet Act into Law. Photo/Screengrab/@TibetTV/Facebook