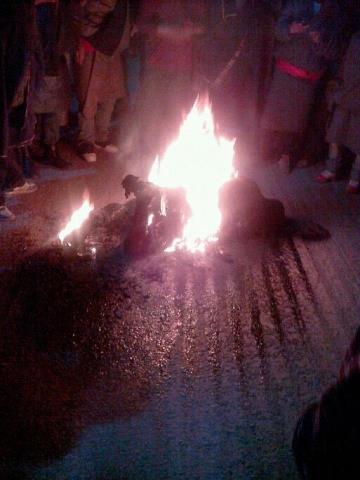 Thupwang Kyab set himself on fire on the main street of Sangkhog around 8:00 pm (local time) in protest against the Chinese government’s repressive rule. He raised slogans demanding the return of His Holiness the Dalai Lama to Tibet, and the immediate release of the Panchen Lama and other Tibetan political prisoners. He died on the spot.

A photo shows Thupwang’s body being engulfed in flames.

Thupwang, son of Lumo Jam, is a native of Ruming village in Sangchu county. He is survived by his wife, Dorjee Dolma.

Local Tibetans prevented the police from taking away Thupwang’s body, and they then took it to his wife’s native village of Sertri. The Chinese government has deployed a large number of paramilitary forces and police in the region following the incident.

Latest reports coming out Tibet say two more Tibetans have set themselves on fire in Driru county in Nagchu prefecture in Tibet Autonomous Region, where a 43 year old Tibetan man named Gudrub died of self-immolation last month. Details of the incident are currently not available.