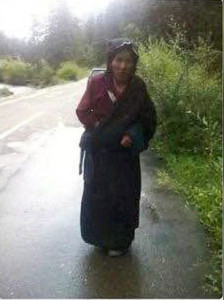 DHARAMSHALA: A Tibetan woman, aged in her 50s, mother of five from Dotsa village in Dzoge County, Ngaba Prefecture has reportedly self-immolated and died on March 23 to protest Chinese rule in Tibet. Due to severe clampdown on communication with the outside world, the news of Sonam Tso’s self-immolation arrived late.

“A young monk heard her call out for the return of the Dalai Lama and for freedom for Tibet as she self-immolated,” reports said.

The report also added that Sonam Tso’s husband and the monk tried to put out the fire. Tsultrim, Tso’s uncle brought her inside the monastery. She was later put into a vehicle to be taken to a hospital, but she died before leaving the monastery.

The local police detained Tsultrim for eight days for discussing the incident with other people. He was also forced to delete photos he had taken of the protest.

Based on reports, her husband Kalsang Gyaltsen was called in for questioning three times after the incident.

This is the second case of self-immolation inside Tibet this year after Kalsang Wangdu, a monk of Retsokha Aryaling monastery self-immolated on 29 February in Nyarong county, Kardze (incorporated into China’s Sichuan Province).

The total self-immolation inside Tibet reached 144 since 2009. Out of the 144, 125 have died while the status of the rest remains unknown or critically injured. (See Fact-sheet) Most of the self-immolators have called on the Chinese government to allow the return of His Holiness the Dalai Lama to Tibet and freedom for Tibetans.

The Central Tibetan Administration has repeatedly urged the Chinese government to address the underlying causes which are pushing Tibetans to set themselves on fire and have also appealed Tibetans not to resort to drastic actions such as self-immolation to express their anguish.