Tibetan Singer Sentenced to Three and a Half Years in Prison 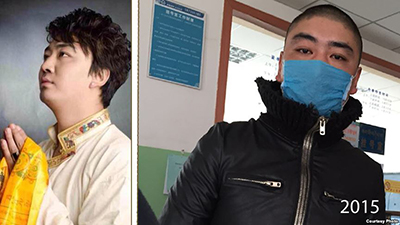 DHARAMSHALA: Gonpo Tenzin, a popular Tibetan singer from Driru (Ch: Biru) County in Nagchu Prefecture in the so-called Tibet Autonomous Region was sentenced to three and a half years in prison by a local Chinese court on 15 April 2015.

Gonpo was arrested in November 2013 on unknown charges, and was kept in detention without any access to legal proceedings for over a year. During his detention, he was brutally tortured and deprived of all political and legal rights.

After constant inquiries from Gonpo’s family about the cause of his arrest, Chinese authorities have responded that the singer was arrested for his song ‘Where is the new year in Tibet’. The song allegedly praises Tibetan culture and language, and encourages Tibetan people to preserve their language and culture.

Gonpo Tenzin hails from Shakchu Township in Driru County. He lived with his aged parents, wife and kids at home before his arrest.

Driru County was at the center of several peaceful protests including self-immolation protests against the Chinese government’s repressive measures in recent years. As a result of the peaceful Tibetan resistance, many youths from the region were imprisoned with politically-motivated charges, accusing them of colluding with ‘exiled separatist forces’.

Monks from these regions were also restricted from traveling to other places in Tibet for spiritual and educational purposes; instead the Chinese government forces them to undergo political re-education classes.