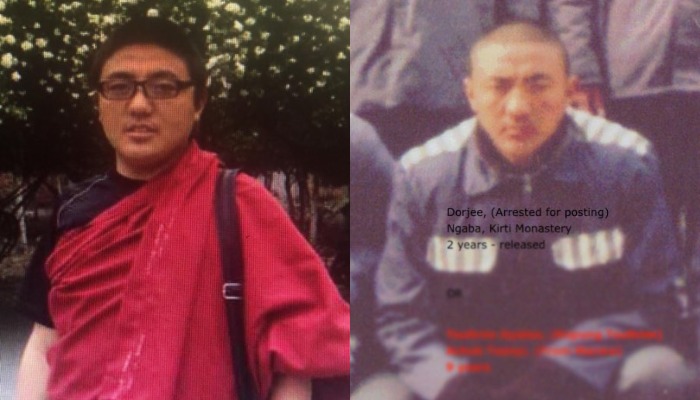 Lobsang Dorje, a Tibetan monk from Ngaba county’s Kirti Monastery who was arrested more than a year ago was recently sentenced to 3 years in prison by Chinese authorities. Photo courtesy of Lobsang Yeshi and Kanyag Tsering, monks from Dharamshala based Kirti Monastery

Dharamshala: A Tibetan monk from Ngaba county’s Kirti Monastery who was arrested more than a year ago was sentenced to 3 years in prison by Chinese authorities last week as per our sources.

In July last year, Kirti Monastery’s monk Lobsang Dorje aged about 36 years was picked up by the Chinese police authorities from his monastic quarters in the middle of the night on suspicion of contacting with the outside world. He was kept under incommunicado detention since then and neither his family members nor the monastery had much information about his whereabouts until the recent sentencing. According to Lobsang Yeshi and Kanyag Tsering, monks from branch of Kirti Monastery based in Dharamshala, Lobsang Dorje was born in the Ngaba County’s Chukle Gabma village and joined Kirti Monastery in Tibet at a very young age. His father’s name is Sangri.

This is the second sentencing of Lobsang Dorje. He was earlier arrested on 23 May 2008 for showing disrespect to the “patriotic re-education” which was being imposed on the Kirti monastery. He was sentenced to two years imprisonment then.

The health conditions of Lobsang Dorje is yet unknown. It is a common practice of torturing Tibetan political prisoners especially while they are in incommunicado detention. Moreover, former political prisoners are especially in a vulnerable position as they are under continuous surveillance by the authorities and are picked up from their residence at odd hours on mere suspicions as was the case with Lobsang Dorje.

Moreover, the charges for sentencing Lobsang Dorje are not yet known. China has frequently abused and misused the law, particularly Article 103 (2) of the Chinese Criminal law on “incitement to separatism” to suppress freedom of expression, religion, assembly and association and the cultural rights of the Tibetans. Recently Five UN Special Rapporteurs wrote to China asking about a group of Tibetans arrested for celebrating the Dalai Lama’s 80th birthday.