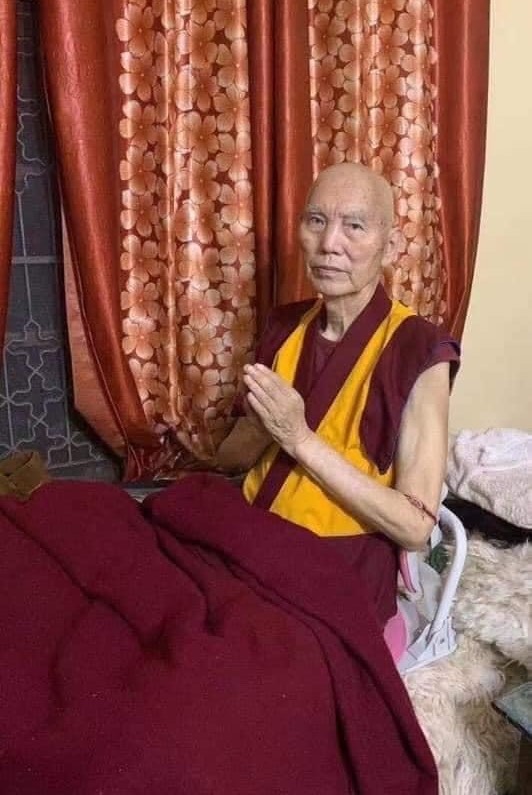 Dharamshala: A Tibetan Buddhist scholar from Gaden Jangtse Phara Khangtsen in Mundgod Tibetan settlement has reportedly remained in the state of Thukdam for more than 20 days now. He was declared clinically dead on 5 May morning. Read the original report filed in Tibetan here.

The Department of Religion and Culture, CTA has on Wednesday confirmed that Geshe Lobsang Tsering from Gaden Jangtse monastery who passed away on 5 May still continues to remain in the rare meditative state of Thukdam.

As is often characterized in this Buddhist phenomenon, the body shows no signs of decay or decomposition for days or weeks after clinical death. According to Tibetan Buddhist literature, there is a certain glow on their face and a warmth in their body as a normal living person would.

Geshe Lobsang Tsering who’s been in the state for over 20 days now has shown no sign of physical decay or depletion. It was even observed that his hairs had been growing in the past 20 days in the Thukdam state.

Geshe Lobsang Tsering was born in Kham Bathang in 1941 to parents: Yeshi Tsultrim and Yeshi Lhamo. At the age of 8, he was ordained as a monk at Gaden Phendeling monastery. In 1957, at the age of 14, he joined Gaden Jangtse Thoesam Norling Monastery where he pursued his Buddhist studies. He took Getsul vows from Khen Rinpoche Jetsun Yeshi Gawa. In 1959, he fled to India and remained the first year in Assam before moving to Buxar monastery where he continued his Buddhist training for ten years. In 1965, he received the full ordination from His Holiness the Dalai Lama. In 1970, he moved to Mundgod and continued to pursue his studies and practices. In 1983, he appeared for the major Gelug examination.

In 1990, he graduated as Geshe Lharampa, the highest Geshe degree of scholarship conferred within the traditional Tibetan monastic system in the Gelug school. The curriculum requires more than fifteen years of intensive study. In 1999, for a brief period of six months, Geshe Lobsang served at the Gyudmey Tantric monastery as Gekyo (དགེ་བསྐོས ). He had previously spent 3 years at the monastery for a Buddhist course. From 2000 to 2001, for two years, he served as Chagzoe of Gaden Jangtse Monastery. Throughout his life, Geshe Lobsang Tsering studied and trained extensively in the major Tibetan Buddhist traditions and have distinctly contributed to the Buddha dharma and sangha.