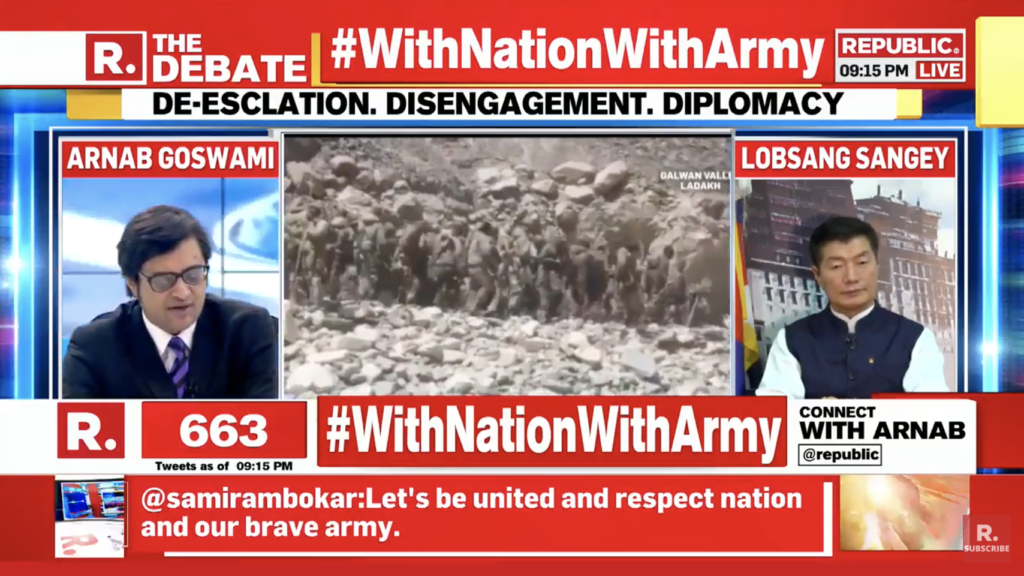 Dharamshala: Tibet is the lesson the world is yet to learn from but must to understand China expansionist plan, CTA President Dr Lobsang Sangay said during an interview with Republic TV in which he also exposed the paranoid regime and the coronavirus factor in China’s aggression at the LAC.

President Dr Lobsang Sangay was speaking with Arnab Goswami at Republic TV on 9 pm debate titled With Nation With Army.

Excerpts of the interview:

How do you view the present situation? We are hearing reports of tactical retreat by the Chinese. There have been talks at a couple of levels. Can we really trust them at this stage and what should we really be watchful about?

President Dr Sangay: De-escalation is good as we saw in Dokhlam also. As long as it is backed up with real action then you should trust them. As we always say, trust but you must verify. From our sixty years of experience, it is quite difficult to trust the Chinese regime. They say something and do exactly the opposite. They came in the name of peace and prosperity for the Tibetan people, but ultimately Chinese took away our country, independence and we were driven into exile. The sweet talks of the Chinese regime that they did with us fooled us and that’s how we lost our country.

So, trust but verify.

What is their long term agenda here? Everybody has been trying to read their mind. You know them closely, you have studied them, you have battled him. What are they looking for?

There is internal pressure within China because there is growing criticism against the Chinese leadership. There is external pressure as well from the international community. 130 countries have signed up to investigate the origin of Coronavirus which obviously originated in the Chinese city, Wuhan. Because of all these factors, I think, they are looking at diverting tactics and hence they are putting pressure on India at the border and also the South China Sea, Taiwan and Hong Kong where they have passed the Security bill to control people in Hong Kong.

Even inside Tibet, Chinese actions reflect more of paranoia where they are being extremely strict and repressive.

Tibet as the answer to the Indo-China border dispute

India and the world should learn from Tibet experience with China. We lost our country 60 years ago. We have been saying, what happened to us will happen to you, to India and all the neighbouring countries. Now the border tension from Ladakh to Arunachal Pradesh to Sikkim is happening because Tibet was occupied 60 years ago and the Chinese government had the strategy to regard Tibet as the palm, occupy the palm and gain control over five fingers: Ladakh, Sikkim, Arunachal Pradesh, Nepal and Bhutan.

Each time there is border incursion, they are playing the same act which they did in Tibet. First, they came in the name of peace and prosperity for Tibet and we lost our country. Now instead of celebrating the 70th anniversary of diplomatic relationship for which China should be thankful to India, they are instead making incursions and arousing tensions.

You must learn from Tibet, what has happened to Tibet is happening all over the world, including in India.

We all are born and brought up in India. Whenever there is a cricket match between Pakistan and India, we support India. Similarly when there is border incursion, and national security of India is affected, it pains us and it inculcates in us to be in solidarity with the jawans so that’s how the Tibetans in India are reacting.

#WithNationWithArmy | From our 60 years of experience, it is difficult to trust the Chinese regime – they say something and do something exactly opposite: Lobsang Sangey- President, Central Tibetan Administration