Sikyong Dr Lobsang Sangay thanked Congressman McGovern for being instrumental in TPSA’s success and added that both Congressman McGovern and Senator Rubio were the prime crusaders for putting Tibet back on the agenda of the international forum. Dr. Sangay recalled his audience with His Holiness the Dalai Lama after the passing of TPSA during which His Holiness commended the fresh development in Tibetan “yakpo shedrag jung shag” meaning “this is an excellent development.” Dr. Sangay went on to explain how the significance of TPSA has sent shivers down the Chinese leadership’s spine who is now resorting to damage control measures to contain its impact on Tibetans inside Tibet who have been celebrating the Act’s passage through symbolic cultural expressions such as the burning of incense and hoisting of prayer flags.

Congressman Jim McGovern called the Act’s passage a “tremendous achievement” and attributed the significance of the Act, pivoting to bipartisan support for Tibet in the U.S. Congress, and lauded speaker Nancy Pelosi for shepherding the passing of the Act and Senator Marco Rubio for his leadership. He further thanked His Holiness the Dalai Lama for being an inspiration to the United States and meanwhile pledging his commitment to “redouble his efforts” to ensure that the Biden Administration effectively implements both the TPSA and the Reciprocal Access to Tibet Act of 2018. Congressman McGovern expressed his expectations of a stronger coordination between the U.S. Administration and the Congress on issues of His Holiness the Dalai Lama’s reincarnation, human rights of Tibetan people, and security of Tibet’s environment and water resources. He called for an appointment of a high-level special coordinator for Tibetan issues and expressed his hopes for a meeting between President Biden and His Holiness the Dalai Lama.

Bethany Poulous shared Senator Rubio’s belief that the international community cannot turn a blind eye to the abuses happening at the hands of the Chinese Communist Party, their tightening grip on the Tibetan people, aiming to wipe out Tibetan culture and religion, and the interference in the institution of the Dalai Lama and his succession. She further shared the Senator’s commitment to finding new tools including sanctions to hold those responsible, accountable. Bethany expressed that the TPSA is only the beginning and reaffirmed Senator Rubio’s belief that the issue of Tibet is not just a moral issue but the interests of the United States.

Representative Ngodup Tsering lauded TPSA as the most comprehensive legislation on Tibet thus far, entailing a number of provisions that are dear to the Tibetan people, and thanked Congressman McGovern and Senator Rubio for their unshakeable commitment to freedom, human rights, and democracy in general and for Tibet in particular.

Bhuchung Tsering highlighted the two main messages of TPSA— firstly as strengthening the institutionalization of U.S. support for Tibet, including the democratic governance under the Central Tibetan Administration, and secondly, as sending a strong message that the Tibetan issue is a domestic issue of the United States.

The 90-minute gratitude ceremony that was streamed live on Tibet TV recognised the signing of the TPSA into law of the world’s most powerful country, as marking a fresh chapter in U.S.-Tibet history, a chapter of hope, courage, and strength. It also reiterated the significance of the TPSA as it marks yet another breakthrough in the U.S. support for Tibet and stands as a testament to how the United States continues to be an important anchor for Tibet, steering the Tibetan people through rough waters as the rights violations of Tibetan people continue to this day under the illegal Chinese occupation of Tibet.

A citation presented to congressman McGovern and Senator Rubio thanked them for “adding a bright chapter in the history to U.S.-Tibet relations, and for renewing the hopes and aspirations of Tibetans (inside and outside Tibet) for freedom.” 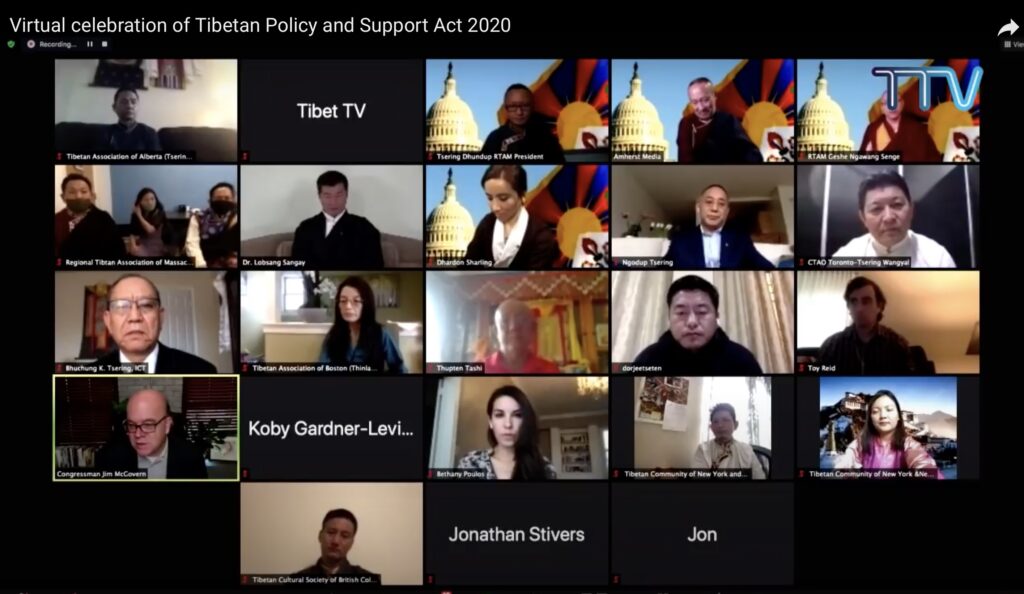