Tibet has never been an internal affair of China: Information Secretary TG Arya 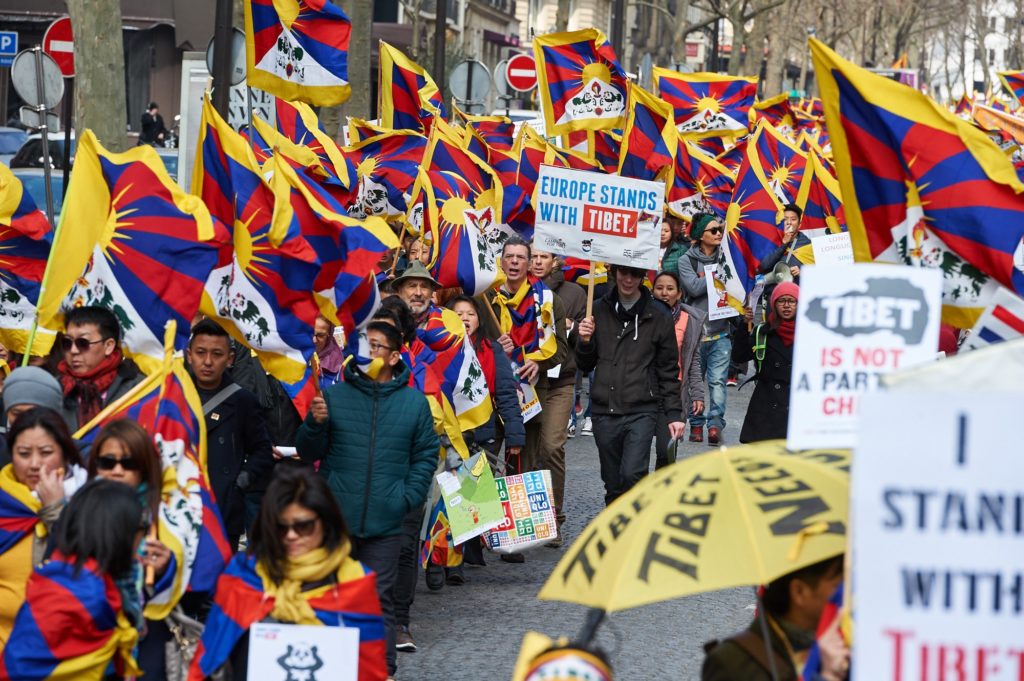 Tibetans and supporters leading a rally for Tibet/File photo

The Tibetan Policy and Support Act passed in the US House on January 28 with supermajority was a great victory for the Tibetans1. The bill has greatly shaken the Chinese communist leadership out of its condescending hegemonic reverie. Chinese communist party’s mouthpiece, China Global Television Network (CGTN)2, Xinhua Net3, Global Times4, etc. went belligerent attacking the US lawmakers for interfering in China’s ‘internal affairs’.

The bill sends a strong message to the Chinese communist government that the US government and the public strongly support the just struggle of the Tibetan people for freedom and justice in their homeland Tibet. The bill lauded the efforts of the Central Tibetan Administration; it endorsed the Middle Way Approach and genuine autonomy for Tibetans; and environment protection of Tibetan plateau. It also raised religious freedom including freedom to select the next Dalai Lama according to the Tibetan Buddhist tradition and warned Chinese authorities of sanctions if they interfere in the said matter.

One thing China must understand is that Tibet has never been an isolated internal affair of China. Tibet is an international issue. It is an issue of forceful illegal occupation of a peaceful non-violent independent country. It is an issue of gross violation of human rights, religious freedom, and the environment. Tibet has become a symbol of resilience against the brutal force of communism and dictatorships. Repressive regime and genocide anywhere is an international issue and not an internal affair.

Liu Xin of the state-run CGTN, while commenting on the Tibetan Policy and Support Act, has provoked US lawmakers by saying “Do your homework on Tibet”5. A researcher Lian Xiangmin says that the Tibetan local government has to seek approval of the central government to select the reincarnation of the Dalai Lama.6

For their information, Gedun Drupa (1391-1447 AD) was the first Dalai Lama. The third Dalai Lama Sonam Gyatso (1543-1588 AD) received the title ‘Talai’, meaning wisdom as deep as ocean in the Mongolian language, from the Mongol King Altan Khan in 1578. Sonam Gyatso, in turn, conferred the Mongol King with the title of ‘Chogyal’, Dharma protector king. It was a formal exchange of titles between two sovereigns. The Ming emperor does not figure anywhere in this exchange.

Ms Liu’s assertion that Sonam Gyatso appealed to the Ming dynasty court for the title ‘Dalai’ is wrong and unproven. In fact, on his way back to Tibet from Mongolia, the Chinese Ming emperor invited Sonam Gyatso to visit the Chinese capital, but the latter declined because of his preoccupation.

Seeking approval of some external government to select the Dalai Lama’s reincarnation is preposterous.

Now, regarding the assertion that the Central government has authority to strip Dalai Lama of his title claiming that it has happened three times in history is an absolute a blatant lie and fabrication. The only truth in Ms Liu’s statement was when she said, “When there are too many fleas on someone, it stops feeling itchy.” Of course, distortion of history to this extent is too much to take the things seriously. Having born and raised under the communist regime, Liu could be forgiven for the indoctrinated naive idea about religious freedom and the concept of reincarnation. Therefore, If anyone, it is Ms Liu who should have done her homework better, not the US lawmakers.

Zhang Tengjun, a research scholar at the Chinese Institute of International Studies (CIIS), in his article “US anti-China legislation shows lack of courage to play fair”7 has also lashed out at the US Congress for the Tibet Policy and Support Act. He criticized that the US Congress has “repeatedly meddled in China’s domestic affairs, proposing several acts targeting, Xinjiang, Tibet, Hong Kong, and Taiwan.” But the reality is for all of us to see: the incarceration of more than one million Uyghur in East Turkistan;8 the repressive policy and cultural genocide in Tibet;9 unrest in Hong Kong and the victory of Tsai Ing-wen in Taiwan, all these shows the failure of Chinese communist party’s policies in the regions. It has nothing to do with the US interference, it is all CCP made.

Chinese ambassador to India, Sun Weidong, came up with yet another Chinese sugar-coated propaganda to mislead the Indian public. In his article “China’s choice of peaceful development is based on a commitment to world peace”10 in Indian Express, he has very finely produced a lamb out of a fiery dragon.

He says, “The pursuit of peace and harmony has been deeply rooted in the spiritual world of the Chinese nation.”

Since the foundation of the Communist government in 1949, the whole of China, and the occupied regions including Tibet faced massive destruction of monasteries, churches, mosques and other religious houses. More than 6000 monasteries and nunneries have been destroyed in Tibet alone. Religious persecution11 is still going on and organ harvesting of the Falungong practitioners is an open secret.12  Monasteries in Tibet are heavily guarded and supervised by the communist party members, who do not believe in religion. Monks are forced to vow loyalty to the communist party and condemn His Holiness the Dalai Lama13. What peace, harmony and spiritual world is the Ambassador talking about?

The article says “China has never had a record of colonization and expansion” and “We will never seek hegemony, expansion or sphere of influence.”

Was Tibet not illegally occupied and colonized? What caused the death of 1.2 million Tibetans and the flight of His Holiness the Dalai Lama and Tibetans into exile? What about the unprovoked Chinese aggression against India in 1962 and the recent military intimidations at the border14?  What about the ongoing aggression in the South China Sea15, and through debt traps in the guise of BRI economic incentives in the South East Asian and African nations?16 What are all those Confucius Institutes doing abroad, and why they are getting closed?17

What is China doing in Nepal right now?18  “Anyone attempting to split China in any part of the country will end in crushed bodies and shattered bones.”19  This is how Xi Jinping intimidated the Nepal government into signing the extradition law.

Is this the “principle of adhering to the path of peaceful development and the win-win strategy of opening up”?

The voice and message from Taiwan and Hong Kong people should be loud and clear; time for democracy and governance by the people has come.

Right now, the immediately pressing issue for the CCP leadership is to help its citizens from the pandemic Coronavirus. Rather than silencing the doctors and the victims,20 China should cooperate with the World Health Organization (WHO) in containing the virus. It is no longer an internal affair of China!

*Mr. Tsewang Gyalpo Arya is the Secretary of the Department of Information and International Relations (DIIR) of the Central Tibetan Administration (CTA). He also holds the additional responsibility as Director of Tibet Policy Institute.

Disclaimer: The view expressed above is the author’s own.